In my personal taxonomy, most makeup falls into one of four categories: 1) products that I collect actively (lipstick, eyeshadow, nail polish); 2) products that I own in limited numbers because I use them very slowly and/or don't find them exciting (blush, highlighter, eyeliner); 3) products that I wear regularly but purchase only when I run out because they straight-up bore me (brow stuff, mascara, concealer); 4) products that simply have no place in my routine (foundation, bronzer, contour).

And then there's lip gloss.

I've been wearing it on and off for years, but I can't decide how I feel about it. I fall in love with a specific kind of gloss (opaque, sparkly, sheer, whatever); buy a few shades in that category; decide after a few months that gloss in general isn't for me; and then, about a year later, repeat the whole cycle of fickleness. In my early makeup-wearing days, I favored opaque cream-finish glosses in bold colors, like Revlon Fire and YSL Rouge Gouache (those potato-quality 2014 photos, yikes). Eventually, though, I realized that a glossy red or magenta mouth was a lot of look. It was pretty in selfies, but too impractical and overtly sexy for my shabby lifestyle ("lifestyle"). Inspired by Japanese beauty editorials, I switched to sheer washes of candy colors, such as the NYX Butter Glosses in Peach Cobbler and Raspberry Tart. I'm currently in my third gloss era, which involves semi-sheer berry and neutral shades, with or without shimmer. Here's my entire gloss collection, with the caveat that I've never worn the three rightmost shades out of the house:


Gloss has some definite advantages over lipstick. It's easier to apply, generally more moisturizing, and less likely to fade patchily or produce the dreaded "ring of death" around the lips. But I still associate it with my teenage years, a period not quite far enough in the past to seem appealingly retro. (I've noticed some aughts nostalgia floating around the makeup subreddits, but something tells me it's coming from people too young to remember 9/11.) Though I was more or less oblivious to makeup trends during the first half of the 2000s, I somehow owned lip gloss: a couple of those drugstore knockoffs of the Lancôme Juicy Tubes, clearish and slightly sparkly. Back then, lipstick was for older women like my mom, who never went anywhere without her tubes of L'Oreal Blushing Berry and Raspberries. Lip gloss was youthful, accessible, unfussy, modern.


Of course, what seems modern and youthful in a given year will inevitably seem dated a decade later. I always feel a little uneasy when I wear lip gloss, as if I should also be wearing low-rise bootcut jeans, checkered Vans, and a Kerry/Edwards '04 button. But is it all that dated? I can't figure out the current semiotics of lip gloss. It never vanished from the shelves, but it did seem to fade from public consciousness for a few years, and now we're being assured repeatedly that it's about to return in triumph. Earlier this year, Glossier made its clear gloss permanent and insisted that "lip gloss was never gone. It was just waiting for its moment to return." (Those two statements would seem to contradict each other, but okay.) Rihanna's Fenty Beauty debuted last month with just one lip product, the Gloss Bomb Universal Lip Luminizer in Fenty Glow, and no one complained about the lack of a matte liquid lipstick (though Fenty has since released one, of course). Is lip gloss in 2017 like brown lipstick in 2014, teetering on the border of outmoded and avant-garde? Or was it never out of fashion in the first place?

I don't have answers, but I do have two new glosses: NYX Butter Gloss in Gingersnap and Revlon Super Lustrous Lipgloss in Rosy Future, also known as "that Fenty dupe." 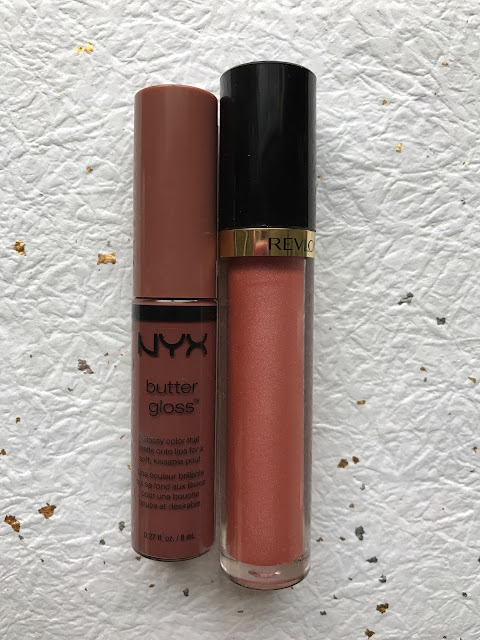 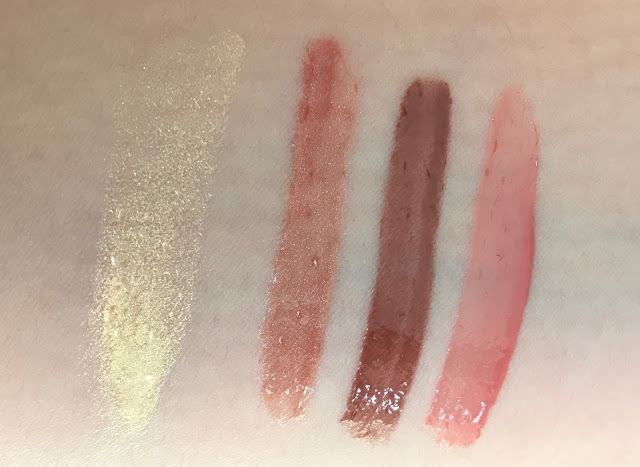 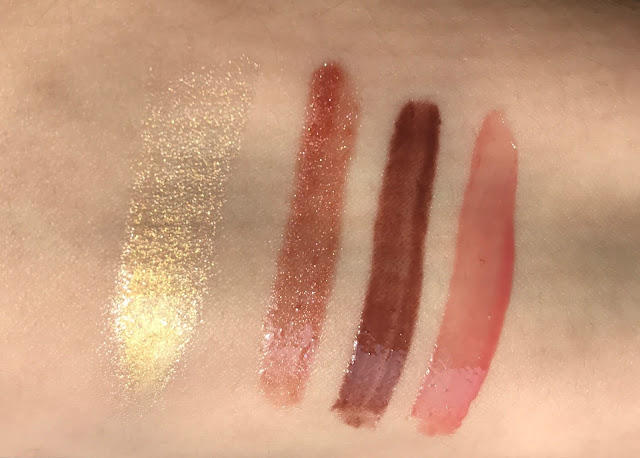 I'm most susceptible to the allure of lip gloss in winter, when my lips are often chapped and cracked. Of all the gloss formulas I've tried over the years, NYX Butter Gloss is my favorite: hydrating, non-sticky, pigmented but not too pigmented, and supremely affordable. Back in October, I picked up Gingersnap, one of the darker Butter Gloss shades. It's a medium brown with a hint of plum, similar to Urban Decay's Vice Lipstick in Lawbreaker. Here's Gingersnap on the left and Lawbreaker on the right; they have very similar color payoff and longevity (i.e. not much of each), though Gingersnap is a slightly cooler brown. 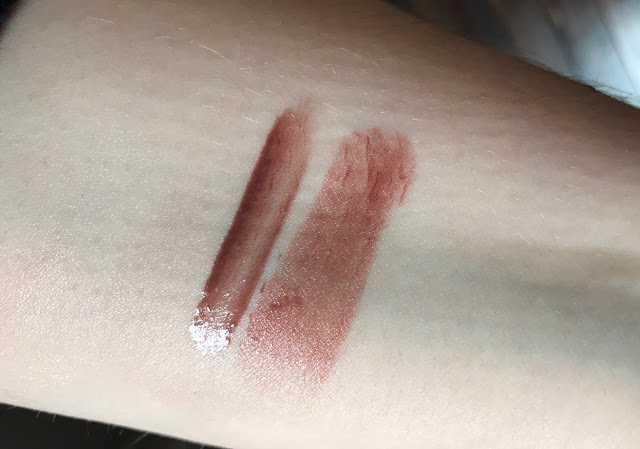 One layer of Gingersnap delivers a subtle brownish MLBB color; you don't really get the color in the arm swatch above unless you build up the product a bit. Like most glosses, Gingersnap doesn't last more than a couple of hours. But it fades evenly and leaves my lips feeling moisturized, which is all I ask from a lip gloss. The NYX Butter Glosses are lightly vanilla-scented, but not perfumey enough to be problematic for me. Here's a lip swatch with a couple of layers: 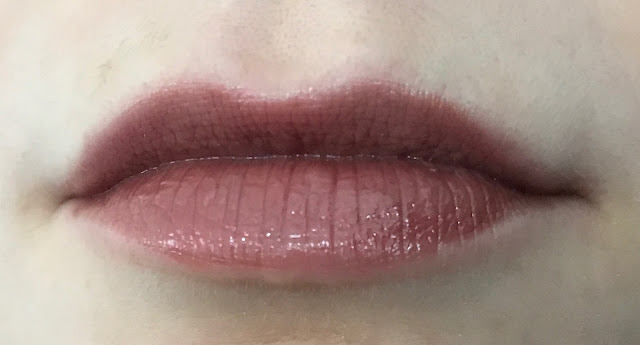 And here's a full face from back in October. As you can see, Gingersnap reads as a tame MLBB on me. I can't remember exactly what other makeup I was wearing, but I'm pretty sure I have Makeup Geek Flamethrower (or is it Legend? they look indistinguishable on my skin) and some ABH Modern Renaissance shades on my eyes. In retrospect, I should have used a warmer-toned lip color with this eye look, but whatever. 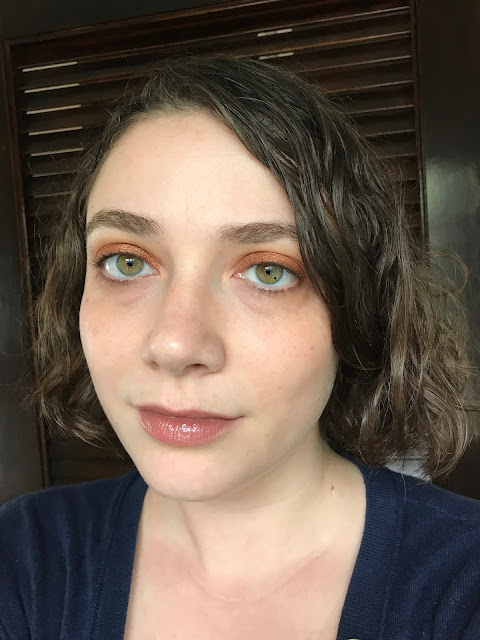 With a cooler-toned look (Kiko Rosy Brown on my eyes, Urban Decay Rapture on my cheeks). Pardon the hat hair; I haven't really had time to take blog-worthy selfies. 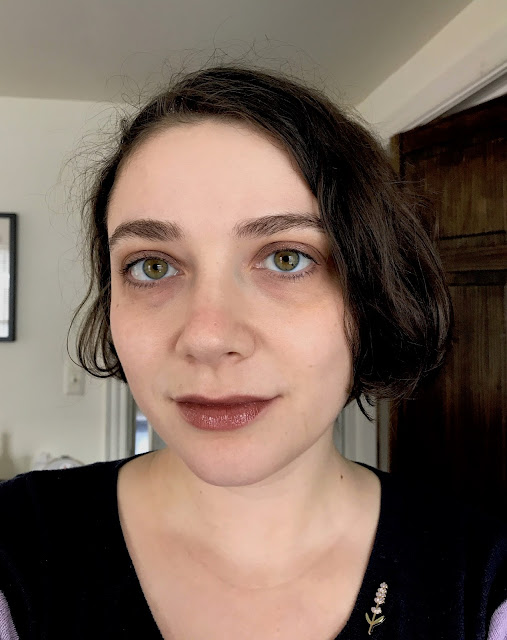 Revlon Rosy Future has been around for a few years now, but it came to my attention only recently, when someone mentioned it on Reddit as a possible dupe for the Fenty Gloss Bomb. 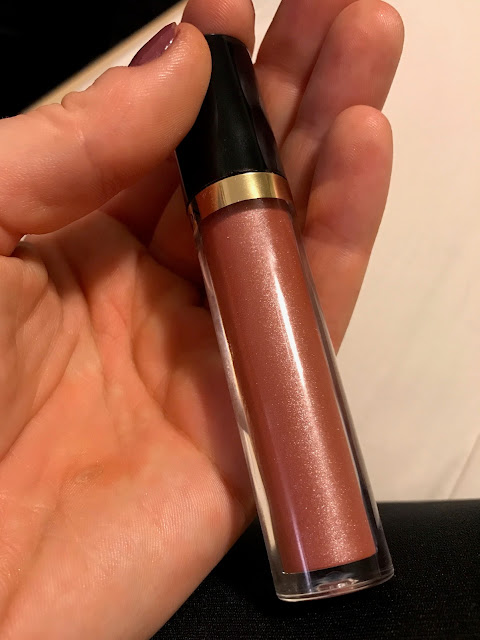 I have mixed feelings about dupe-hunting (more on that in my next post), especially when there's not a huge price difference between the desired item and the dupe. But I was curious about the alleged resemblance between the two glosses, so I brought my tube of Rosy Future to Sephora and swatched it next to Fenty Glow. Revlon on the left, Fenty on the right: 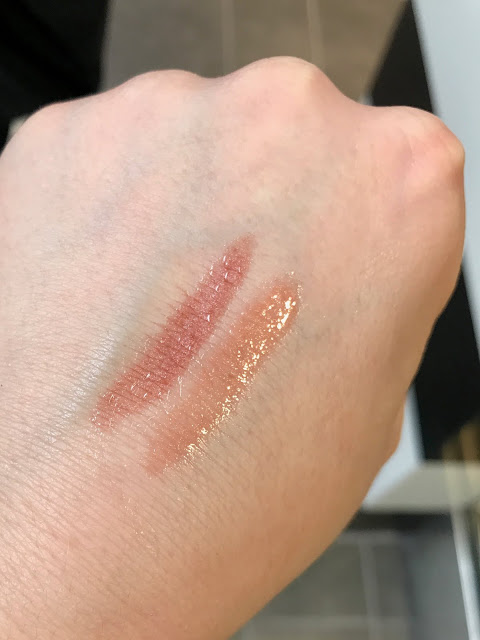 Honestly, they're not all that similar. Rosy Future is a mauve-brown with white pearl; Fenty Glow is lighter, sheerer, and peachier, with warmer-toned, less densely packed shimmer. I didn't try the Sephora tester on my lips (shudder), but from the photos I've seen, Fenty Glow's shimmer is more understated on the lips than Rosy Future's. The two glosses are also quite different in formula. Fenty Glow has a sticky texture and a heavy caramel fragrance, two dealbreakers for me. Rosy Future isn't sticky at all, and it has an almost undetectable vanilla scent. Interestingly, they're about the same price per ounce: Fenty Glow is $18 for 0.30 oz (9 ml), while Rosy Future is between $5.50 and $8.50, depending on the retailer, for 0.13 oz. (3.8 ml). And since a sheer nude gloss is something you'll touch up more often than, say, a matte red lipstick, I think the price per ounce is relevant. If you really want Fenty Glow and don't care about the stickiness and strong scent, I don't see much point in seeking out Rosy Future, since it's not a color dupe and isn't even cheaper per ounce.

Since I didn't care much about Fenty Glow in the first place, I'm happy to appreciate Rosy Future on its own terms. It's such an easy color to wear, and I can see it suiting a wide range of skin tones. In a lip swatch, the pearly shimmer of Rosy Future is still quite apparent. At normal speaking distance, the shimmer diffuses into more of a glow. The base color doesn't change the color of my lips dramatically, but it does make them a bit warmer-toned:

On my (rare) nights out, I often wear a gloss instead of a lipstick to make eating less messy. Alas, I don't have any daylight shots of the look below, but at least I remembered to record exactly what makeup I was wearing. On my eyes, I have ABH Warm Sienna in the crease and on the lower lashline; ABH Cyprus Umber on the outer V; and MUG Legend on the lid. On my cheeks, I have Illamasqua Zygomatic blush and ColourPop Lunch Money highlighter. In this classy restroom shot, Rosy Future basically reads as a clear gloss: 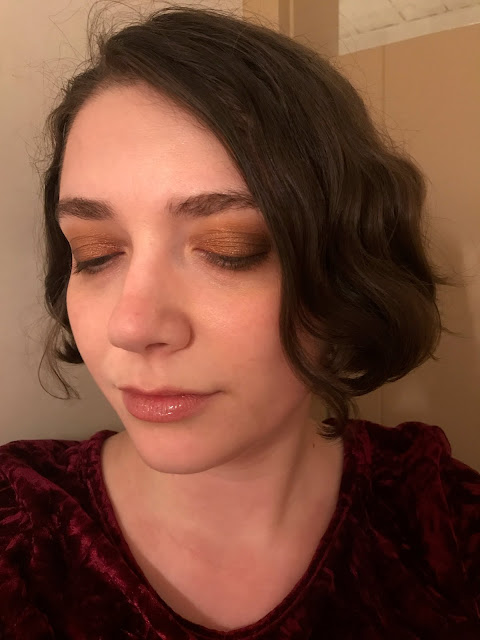 And here's Rosy Future used in one of my infrequent forays into no-makeup makeup, along with Seventeen Statuesque and Urban Decay Cover eyeshadows; Tarte Paaarty blush; and Becca Shimmering Skin Perfector Liquid in Opal, one of the best Sephora deluxe samples I've ever received. Rosy Future withstood two hours of normal drinking and talking, which is about average for a nude gloss. 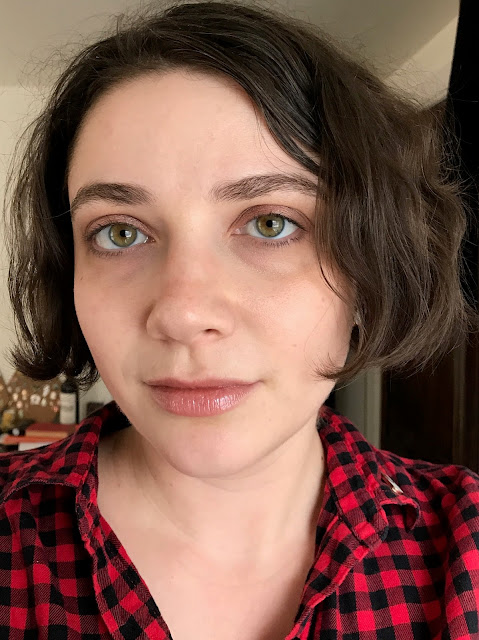 How do you feel about lip gloss—is it due for a renaissance, or did it never really go away?
SaveSaveSaveSave
Posted by auxiliary beauty at 8:42 PM