Wet n Wild MegaLength: The Only Mascara I've Ever Liked Enough to Review

My blog has existed for four years, but this is the first post I've ever devoted to mascara. I literally didn't have a "mascara" tag before today. You'd think I'd write more about mascara, seeing that I wear it almost daily, but there are two reasons why I avoid the subject. First, I just don't find mascara very interesting. It comes in a tiny range of colors, it doesn't lend itself to any kind of experimentation, and I resent having to throw it out after three months (I usually keep mine for six; don't @ me). Second, few mascaras actually give me what I want from a mascara, which is subtlety. So far as I can tell, my natural lashes are about average: not preternaturally long or thick, but not invisible. My main complaint is that they're dark at the root but the color stops halfway up the lash, making them look half as long as they really are:


What I've always wanted is a product one step up from a lash tint: something to darken the upper half of my lashes and add a tiny bit of length and volume. But for as long as I've been wearing mascara (about seven years now), that has been almost impossible to find at a drugstore price point. Judging by the varieties of mascara available at the average CVS or Target, most makeup-wearers these days want lashes as big and bold and reminiscent of falsies as possible. Before this month, the closest I ever came to a mascara holy grail was CoverGirl LashBlast Length, which got discontinued about a year after I discovered it. In the two-ish years after, I tried Maybelline and Revlon and more CoverGirl, and some samples of Bobbi Brown and MAC, but came up disappointed over and over. Every mascara turned out to be too wet, or too clumpy, or just too much. So when I finally got around to replacing my six-month-old tube of Maybelline LashSensational Full Fan Effect, I was disillusioned enough not to bother with exhaustive research on my next one. Instead, I wandered into the Target beauty section and picked out Wet n Wild MegaLength almost at random, then did a quick search for it on MakeupAlley. It had an average score of 3.6, which is pretty damn good for any product on MakeupAlley, and even the complaints indicated that I might like it. "It made my lashes black, that's about it," wrote one reviewer. "No length, no volume, no oomph." PERFECT. 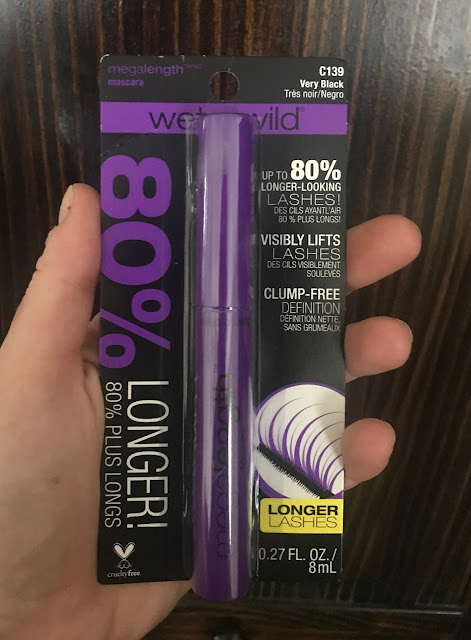 And you know what? It is kind of perfect. This post was supposed to be the second installment in my Glossier review series, but I love MegaLength so much that I couldn't resist writing about it first. I don't know why this mascara doesn't get more hype. It's under $3, it's cruelty-free, and its tube is the freaking Pantone color of the year! What's not to like? 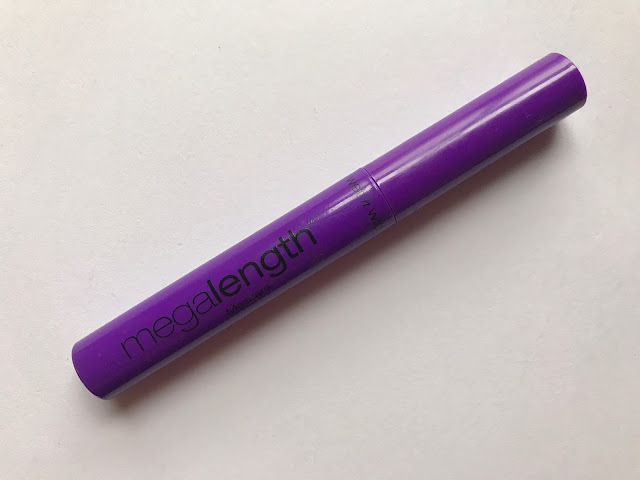 I really do love the tube, and not just for its color. It's slender and elegant, perfect for travel. Compare it to the Maybelline LashSensational tube, which is about the same length but far more bulky and bulbous: 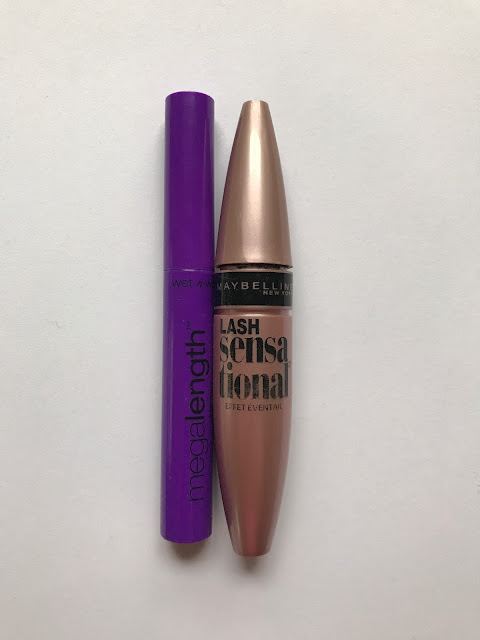 The brushes are also very different. Though I liked the flared shape of the Maybelline brush (below, left), it pulled way too much product out of the tube and did almost nothing to separate my lashes. (Don't judge the Maybelline mascara on its clumpiness in the photo, though. That's only because I'm a dirtbag and waited too long to replace it.) The Wet n Wild brush has more bristles, meaning more lash separation, and pulls out only as much product as I need. It's a pretty firm brush, without much flexibility. 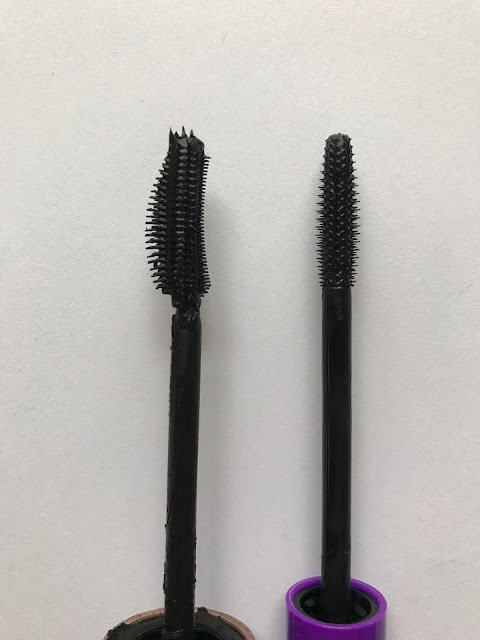 I have almost no complaints about the formula, which delivers a toned-down look that I'd describe as "my lashes but better." All the claims on the packaging are true. "Clump-free definition": check. "Visibly lifts lashes": check. "Up to 80% longer-looking lashes": well, that's meaningless because they covered their asses with "up to," but my lashes look unquestionably longer. This is a thinner, wetter formula than others I've tried, and it makes my lashes stick together if I apply a second coat without letting the first dry, but that's about it for negatives. I usually wear one coat, and it lifts and separates, just like a good bra. It doesn't flake off during the day. It doesn't run or smear on rainy days. It comes off easily with an oil cleanser. It's cheap enough that I won't feel guilty about replacing it after three months. This mascara is exactly what I wanted! How often can I say that about a beauty product? (And it's existed for at least eight years, which means I could have been wearing it this entire time. Damn it.)

Here are my eyes with mascara (left) and without. As you can see, I have fairly straight lashes, and the mascara helps them curl up a little. The only other products I'm wearing in these photos are Glossier Boy Brow in Clear, ABH eyeshadow in Antique Bronze, and NARS Radiant Creamy Concealer in Vanilla.

And a full face, with mascara on both eyes (again, no eyeliner, just shadow). My blush is Tarte Paaarty, my highlight is Glossier Haloscope in Quartz, and my lipstick is Urban Decay Amulet. 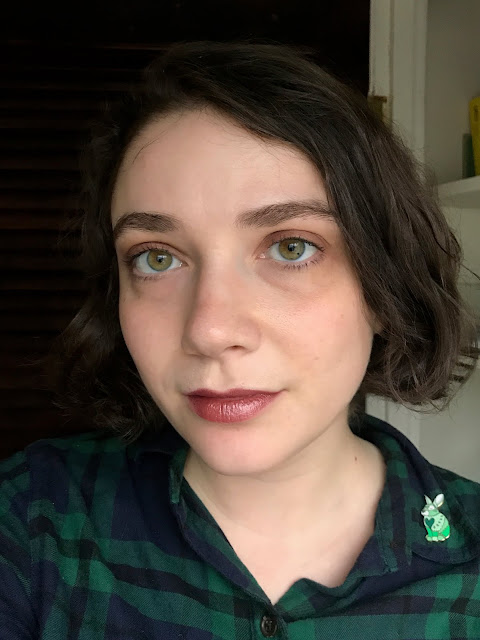 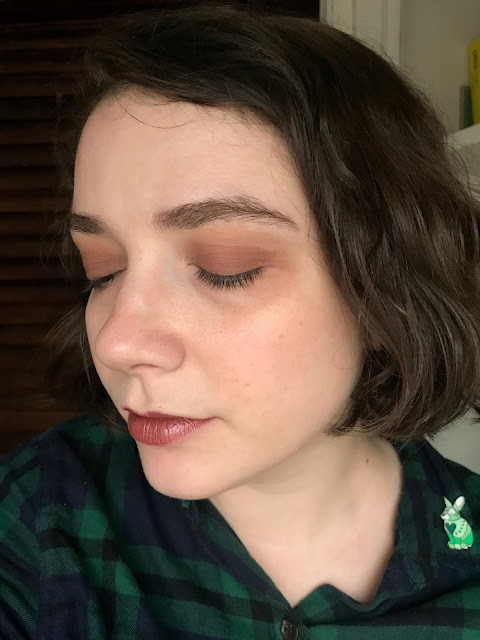 I can't remember the last time I felt so positive about a drugstore beauty product. I'm supposed to be a snarky bitch, but I have nothing but praise! Don't worry, though: my next Glossier review is coming soon enough.
Posted by auxiliary beauty at 7:50 PM 13 comments: