Disclaimer: I purchased this product with store credit from my Glossier affiliate link. I am not (heaven forfend) a Glossier rep.

Welcome to the second of my seven Glossier reviews! At this rate, I'll probably get to the seventh product before the 2020 election, but I'm not making any promises. This post is a review of the Haloscope highlighter in Quartz ($22 for 0.19 oz). 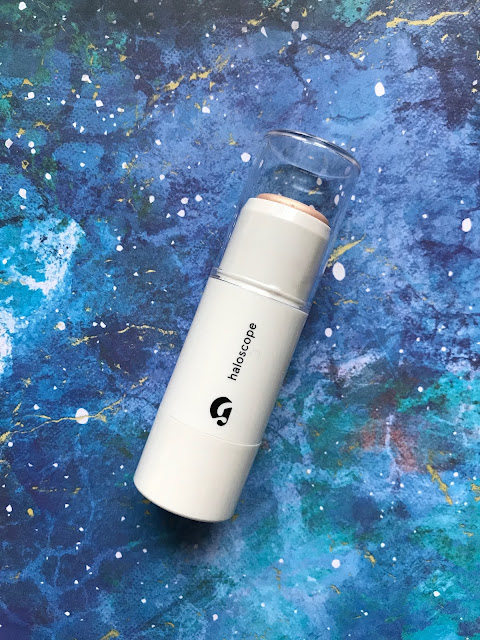 Glossier describes Haloscope as a "dew effect highlighter" with an "outer halo...infused with genuine crystal extracts for all-day enlightenment" and "a solid oil core of vitamin-rich moisturizers for a hydrated, dewy finish." New-Agey Goop-speak aside (what the hell is a "crystal extract"?), Haloscope is a familiar product: a cream highlighter in chubby stick form. The formula is currently available in three shades: Quartz, a champagne pink; Topaz, a deep bronze; and Moonstone, a silvery white. I had no trouble choosing a shade: Topaz looked too dark for me (a shame, since topaz is my birthstone) and Moonstone seemed similar to Topshop Otherworldly, so Quartz it was. 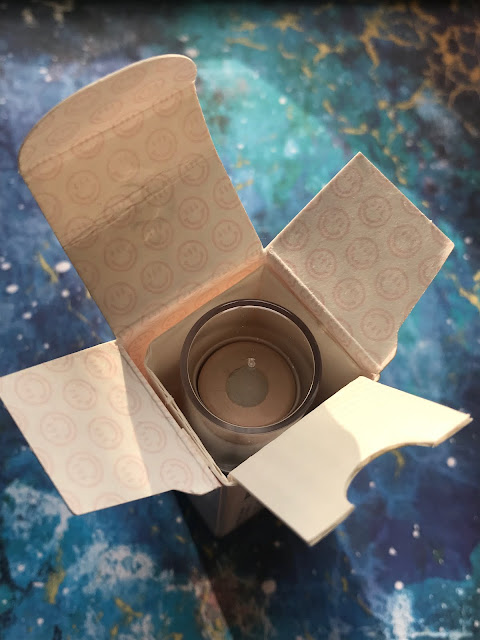 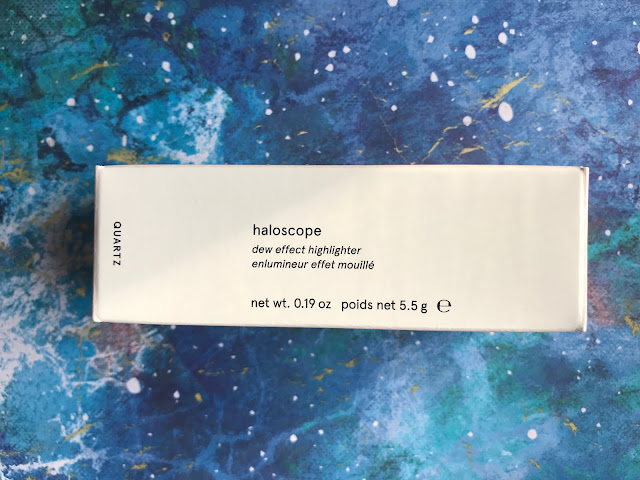 I've had serious issues with the packaging for some other Glossier products, particularly the Generation G lipsticks, which I refuse to repurchase until Glossier listens to the hundreds of customer complaints on its website and fixes the flimsy tubes. Since Haloscope also comes in a plastic tube, I worried about its sturdiness, but I've traveled with Quartz twice now and it's held up perfectly. The tube is solid, the highlighter itself feels snug inside the tube, and the cap snaps on securely. 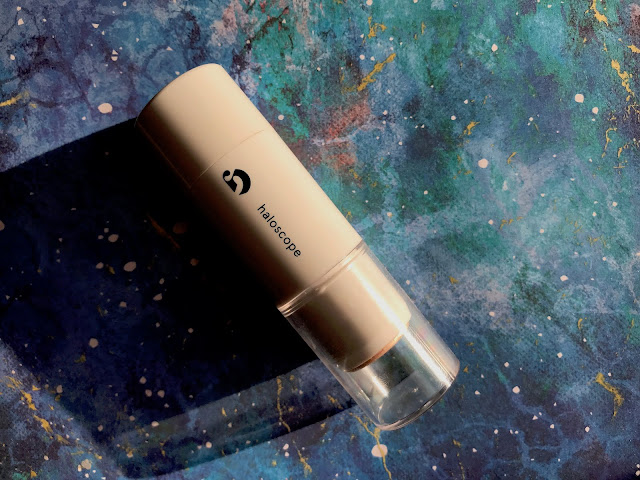 Aesthetically, though, Haloscope is a bit lacking. It just doesn't look or feel like a $22 highlighter to me. The clear cap in particular seems cheap for the mid-range price point. And given the sci-fi vibes of a name like "Haloscope," I would have expected more imaginative packaging, you know? Something galaxy-inspired, maybe? I noted this in my Glossier You review as well: there's often a disconnect between the stories that Glossier tells about its products and the actual physical presence of those products.

Also, I'll just say it: Quartz was my second Glossier product to come with a hair in it (the first being Generation G in Jam). 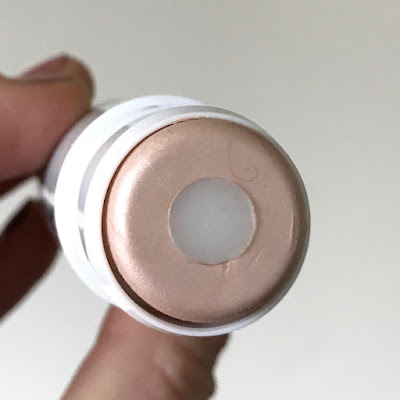 I know, I know: I should have requested a new one. I just couldn't be bothered. I wasn't 100% sure it wasn't an ambient bit of hair from my own room, and I didn't feel like contacting Glossier customer service and going through a whole thing, and I'm probably less of a germophobe than I should be. Believe me, there are many neuroses clamoring for precedence in my brain, but squeamishness about errant hairs just isn't one of them. Is this grossing you out? I'm so sorry. Here's Quartz sans hair: 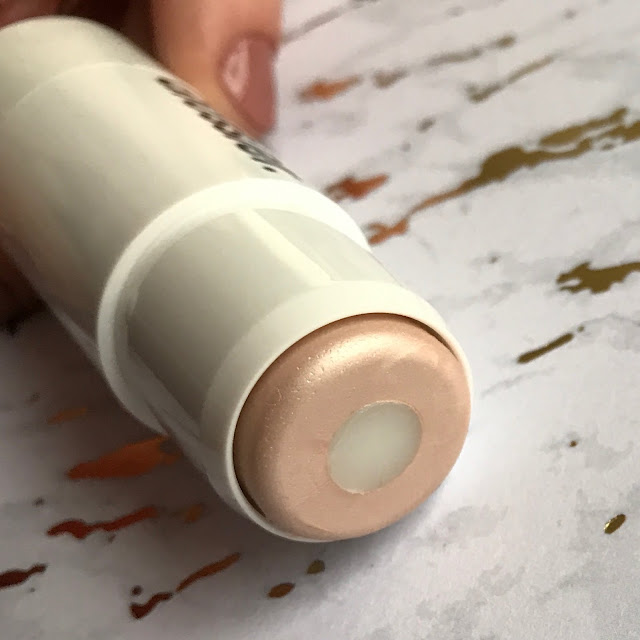 Like most stick highlighters, Haloscope has a misleading tube that's way too large for the amount of product you get. Here's Quartz twisted all the way up: 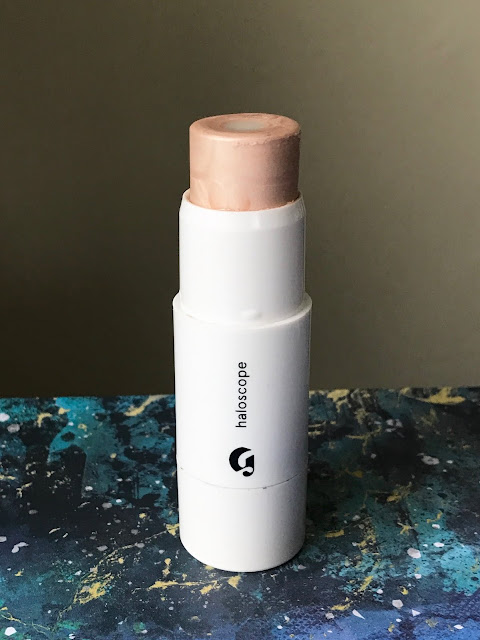 However, this is after a month and a half of regular use, and the only sign that Quartz isn't brand-new is the slight concavity at the top. In other words, this product will last me a while, which makes me less irritated than I might otherwise be about the deceptive packaging.

Now that I've destroyed whatever mystique this highlighter may have possessed for you, let's talk about its performance. When I posted an Instagram story about my Glossier order, someone sent me a message along the lines of "be warned that the Haloscope formula is really subtle, like REALLY SUBTLE." I was confused about this, since I almost never wear a bold highlight and have written ad nauseam about my preference for a nearly undetectable glow. But once I swatched Quartz, I understood. Because Haloscope is supposed to function as skincare as well as makeup (more on that later), the "dew effect" comes from the oil as much as from the mica and "crystal extracts" (lol). For the record, the coconut oil in Haloscope hasn't made me break out. Coconut oil can be comedogenic, though, so use at your own risk.

Here's Quartz swiped once along my arm (left), then built up a little with a finger: 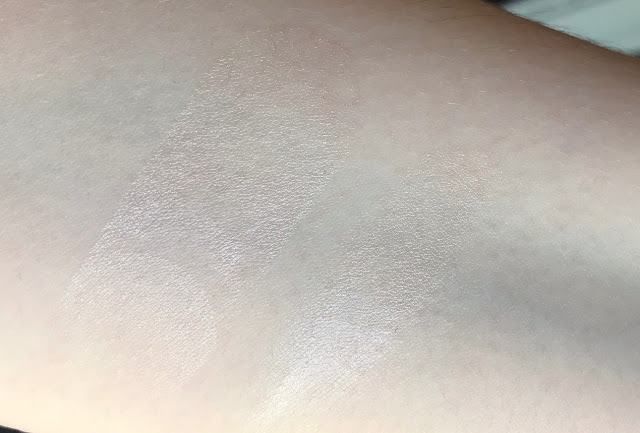 To my disappointment, the beautiful pink that you see in the tube doesn't quite translate onto my cool-toned skin. I suppose these swatches look a hair pinkish (IF YOU WILL), but I'm more inclined to describe the color as "off-white."

Here are the two Quartz swatches with a few more cream highlighters in direct sunlight. Top to bottom: Becca Shimmering Skin Perfector Liquid in Opal; ColourPop Super Shock Cheek in Lunch Money; Quartz, built up; Quartz, one swipe; Topshop Otherworldly. Because the mica in Quartz is less densely packed than in the other highlighters, Quartz's glow looks more smooth and diffused. 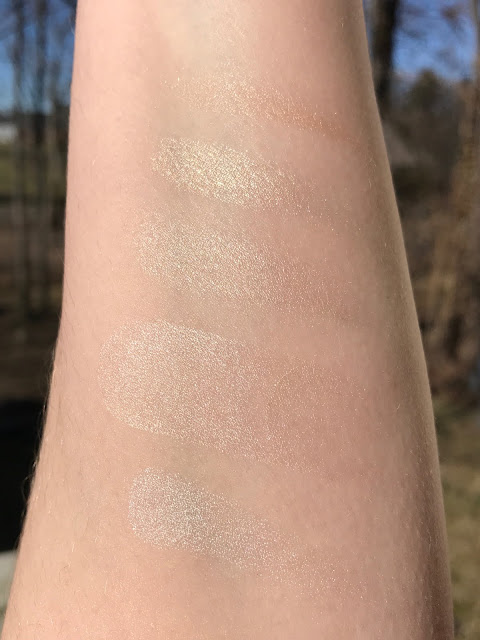 I've seen people apply Haloscope in a few different ways. Because my face is so small, I don't like swiping on Quartz directly from the tube, which is quite wide. Instead, I rub a finger over the product, then dab it across my cheekbone and up to my temple, blending it out as I go. I've tried Haloscope over Glossier Perfecting Skin Tint in Light, my only foundation-like product, and the two perform nicely together, but I can't speak to Haloscope's cooperation with other foundations.

I love the look of Quartz on my skin. It's the most natural-looking highlighter I've ever tried. Because it doesn't actually read as highlighter on my cheeks, I feel comfortable wearing it to academic events, which I can't say about any of my other highlighters. (My academic makeup keeps getting more staid and understated, as does my regular makeup, but that's a subject for another post.) As proof, here I am wearing Quartz for a recent Professional Event that I can't talk about here because I don't want to jinx anything, ugh. My lipstick is Urban Decay Ravenswood, which I bought last month despite my lipstick no-buy because I didn't have a satisfactory MLBB for said Profesh Event. This photo was taken under (unusually flattering) artificial light, after a Tony Moly tea-tree sheet mask, so Haloscope isn't responsible for 100 percent of my glow. Let's say 80 percent? 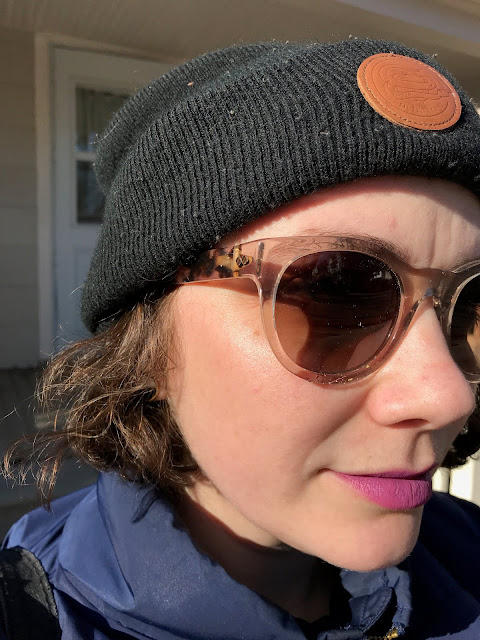 And in indirect natural light: 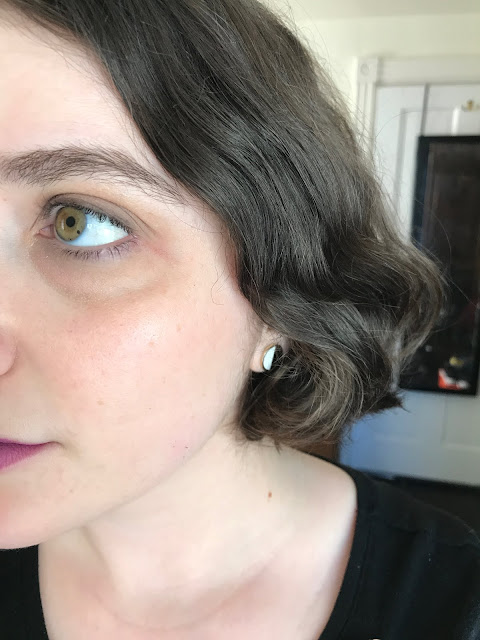 Though Quartz is flattering and easy to apply, its texture falls a bit short for me. Glossier makes much of Haloscope's "dual-delivery formula," but do I want my highlight to double as a moisturizer? I don't know. Glossier is very skilled at filling niches that never existed before Glossier was created. I certainly don't like highlighters that emphasize fine lines or skin texture (which is why I've stopped buying powder formulas entirely), but Haloscope goes a little too far in the opposite direction. Once applied and blended out, Quartz has a noticeably tacky finish that never seems to dry down. I can tap my cheekbone two or three hours after application and still feel that stickiness. I've heard that some people wear Haloscope as cream eyeshadow, but I'm here to tell you from experience that if you have deep-set or hooded eyes, smearing this product on your lids will make them adhere to themselves in nightmarish and previously unimaginable ways. Likewise, you can build up Quartz to a brighter shine on your face, but the tradeoff will be increased stickiness. It's almost like lip gloss for your cheekbones, with the concomitant danger of lip gloss: who knows what will adhere to it?

I'm always reluctant to report on wear times for blush and highlighter because my face sweats A LOT (I guess this is the post where you learn how gross I am??), which means that very few cheek products last longer than a few hours on me. Quartz, well...lasts a few hours on me. At least it's easy to bring along for touch-ups, though I don't usually bother.

Overall, I'd say that Quartz is one of the better Glossier products I've tried. It doesn't blow me away, but it's quietly become a staple in my everyday routine.

Would I repurchase this product at full price? Maybe. I have yet to encounter another highlighter that's so subtle and work-friendly. The stickiness does put me off, though, and the packaging is a little cheap for a $22 product.