A Visit to the Glossier Showroom

I've fallen behind on my promised Glossier reviews (surprising no one, I'm sure), but here's the first of two Glossier-centric posts that I hope will make up for my dereliction. I've been testing Glossier's new mascara, Lash Slick, for the past month, and I finally set foot in the Glossier ~*~showroom~*~ earlier this week. This post will be an account of my time in the showroom, and I'll review Lash Slick later this week. I promise!


The Glossier showroom started as a pop-up shop, but became a permanent fixture in NYC's trendy Soho neighborhood at the end of 2016. Despite my fairly frequent visits to New York, I always found an excuse not to see the Glossier mothership. First, I almost never go to Soho, because I'm not a teenage model, a fashion journalist, or a trust-fund "DJ/actress." Second, I suspected that the showroom experience—because everything is an experience these days—would entail close quarters with aggressively friendly employees, and nothing triggers my social anxiety like attentive salespeople. I like my shopping excursions to be as anonymous as possible, thanks; I hate when capitalism disguises itself as friendship. (Yes, I'm tons of fun at parties!) Third, I'd used store credit to buy almost all the Glossier products I wanted, and I wasn't terribly interested in swatching what remained. This week, though, curiosity got the better of me. If any beauty brand has succeeded in capturing the millennial zeitgeist, it's Glossier; wasn't it my duty as a still-youngish beauty blogger to enter the blush-pink womb?

The showroom is located on Lafayette Street, right at the border of Soho and Chinatown. It's a great shopping area even if you don't have much money (though especially if you do). After browsing Muji (neon gel pens!), Blick Art Supplies (will I never find a water-soluble pen for my embroidery?), and a little covered market featuring local artists/crafters/cheesemongers, I headed toward the brownstone that houses Glossier: 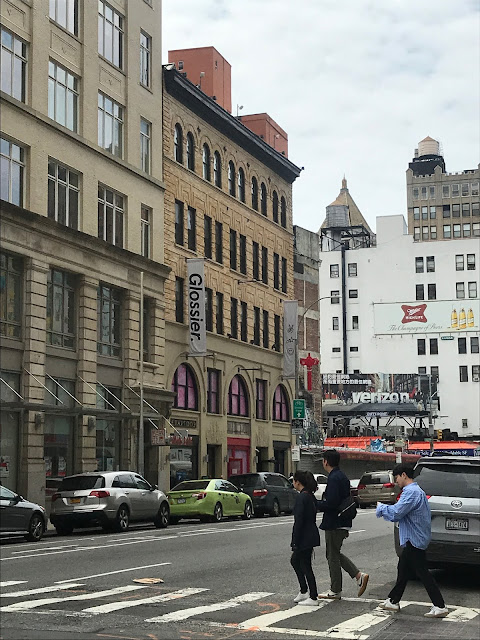 When I walked in, a young woman in a pink jumpsuit asked if I was there for the showroom, then pointed me toward the elevator and directed me to the penthouse level (eyeroll, I know, but the elevator button literally says "PH," so I can't blame Glossier for that). I hope the showroom employees trade off this doubtless annoying task! Riding up to the fourth floor with a few tourists, I noticed that the elevator was scented. I texted my boyfriend about this and he replied, "May your experience be carefully curated."

I arrived at 12:30, just 30 minutes after the showroom opened, but it was already bustling with customers. I can only imagine how hot and crowded the small room gets on weekend afternoons (Yelp reviews confirm my suspicions), and I'd strongly recommend visiting as close to opening time as possible. The space was pretty much what I'd expected: well-lit, painted floor-to-ceiling in millennial pink, perfumed with Byredo Burning Rose candles, and crammed with glass-encased product displays and tables for swatching and sniffing. 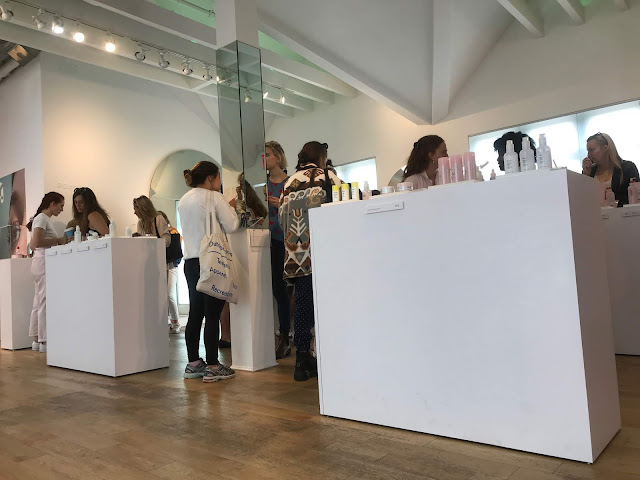 Right in front of the elevator is an alcove that conveys a decidedly vaporwave aesthetic: 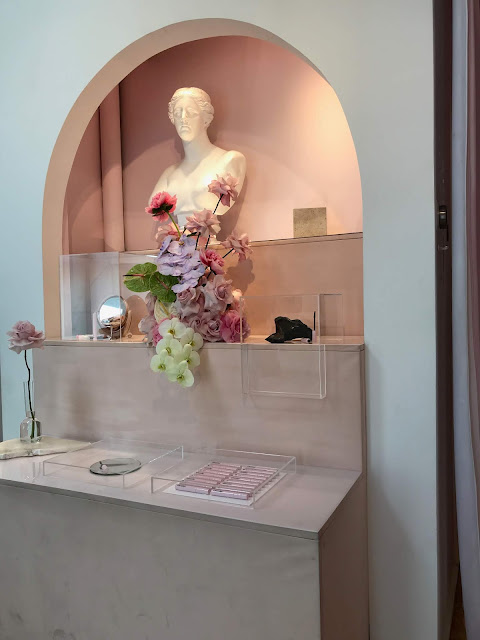 I was a little disappointed to find that the flowers were fake, though I suppose installing fresh orchids every morning would be beyond even Glossier's budget. Frankly, there was something comforting about seeing the seams behind the tapestry: the fake roses, the scuffs and fingerprints on the pink paint, the wear and tear that New York pollution and foot traffic inflict on the most carefully arranged spaces. I also appreciated the large sink in the corner: it was nice to be able to wash off all the swatches and the ambient grime of the city. 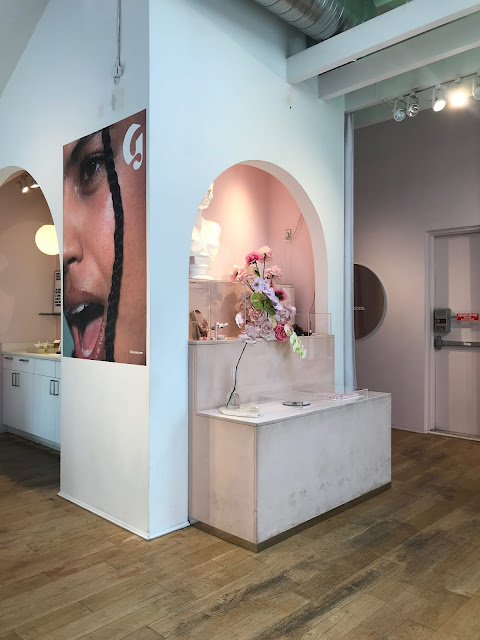 Glossier's other concessions to uninstagrammable reality include plenty of benches where bored husbands, boyfriends, and fathers can sit and check Twitter: 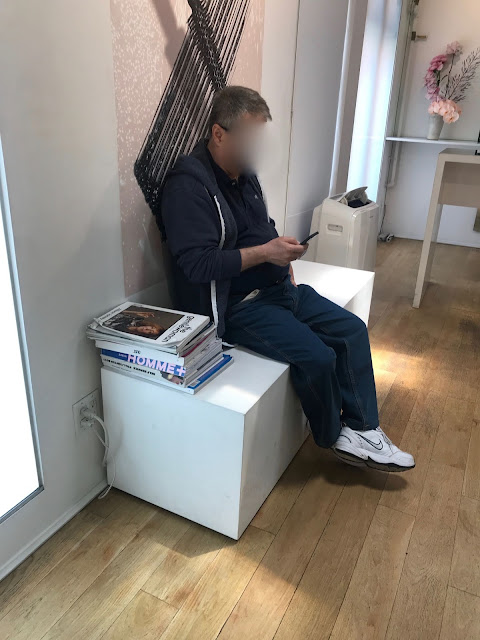 The non-dad clientele was predictably young, though even younger than I'd anticipated: lots of women in their late teens and early twenties, with the occasional set of parents. The pink-jumpsuited employees—who are unaccountably called "editors"—reflected the customer demographics: not a single salesperson looked over 25. Not for the first time, I wondered about the curious discrepancy between Into the Gloss readers and Glossier customers. I've been reading ITG almost since its inception, and I'd estimate that the average ITG reader is around my age (i.e. an older millennial, now in her late twenties or early thirties). But Glossier targets a younger, less beauty-savvy customer. If you've been reading ITG for years, you probably don't need a starter sunscreen and moisturizer, yet that's exactly what Glossier offers. Which is not to say that people my age and older can't enjoy Glossier's offerings: my favorite makeup look is no-makeup makeup with a bold lip, and Glossier provides everything for that look except the bold lip. But a glance around the showroom made it very clear on which age group Glossier's branding is most effective. 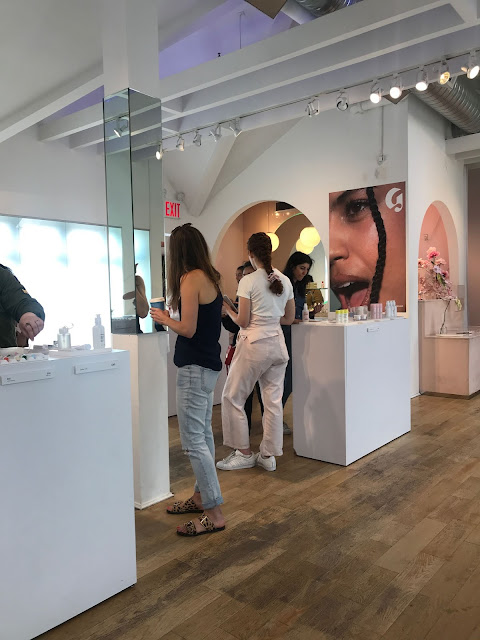 Speaking of employees (sorry, editors), there were a lot of them. Like, possibly too many. Their main task is to ring up customers on the iPads that they carry in the back pockets of their jumpsuits, but most of them seemed to have nothing to do but hang out and chat with each other. I understand that their youthful pastel presence is part of the ambience, and that the showroom is often much busier than it was that day, but I don't think I've ever been in a store with so many salespeople per customer. To their credit, they were not at all pushy; in fact, I felt that I was interrupting their conversations by asking for help. A customer experience somewhere between those two extremes would have been nice. 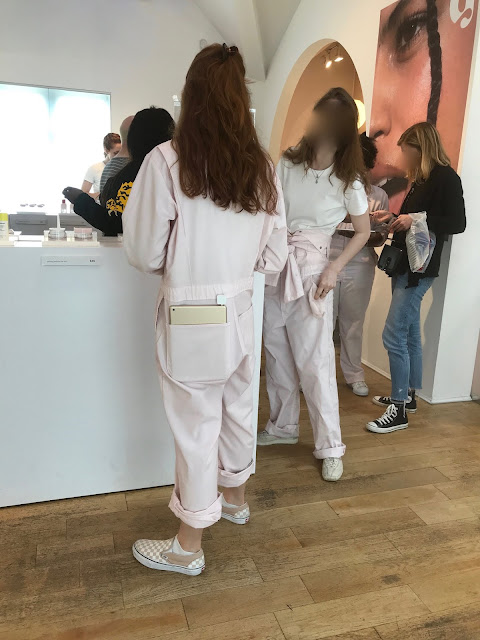 Despite my assumption going in that I had all the Glossier makeup I wanted, a swatching session determined that Lidstar in Lily and Generation G in Like would have to come home with me.


Actually buying these items, however, turned out to be surprisingly complicated. I approached one of the employees and asked if I could use my store credit toward my purchase. She told me that there was no easy way to do that: I'd have to get out my phone, log in to my Glossier account, order the items, specify that I wanted store pickup, actually enter the showroom's address just to make sure, and place the order, which she would then fetch for me. Couldn't be simpler! I did all this, but of course I'd forgotten my Glossier password and had to reset it, and the whole process ended up taking several minutes. Considering that a huge part of Glossier's appeal is the affiliate link they give to every new customer, it's bizarre that the showroom hasn't worked out a smoother system for applying store credit to in-person purchases, especially after one and a half years in business.

After completing my purchase, I took the elevator back to the ground floor, feeling that I'd spent a pleasant, if unremarkable, 20 minutes. Would I recommend the showroom to a visitor to NYC? Maybe. If your main purpose in going there is to try Glossier products in person before forking over $18 for a liquid eyeshadow or tiny lipstick, then knock yourself out. But if you're mainly curious about the customer experience that the Glossier wizards have conjured up, I'm not sure you'll come away enchanted. Some things just look better on Instagram.
Posted by auxiliary beauty at 11:19 AM