Disclaimer: I bought this product with store credit earned through my Glossier affiliate link (thank you to those who have clicked on it!). I am not a Glossier rep.

Glossier has existed for three and a half years, and I've been searching for the perfect subtle mascara for almost that long: that is, ever since CoverGirl LashBlast Length got discontinued.  I figured that if anyone could make a good no-mascara mascara, it would be Glossier, since they seemed intent on perfecting the negative version of every category of makeup (no-lipstick lipstick, no-foundation foundation...). So when they finally announced the debut of Lash Slick about six weeks ago, I was very excited. Of course, that was shortly after I discovered Wet n Wild MegaLength, which gave me a lash pretty close to my ideal; my only complaints were that the formula was on the watery side and took a while to dry. Would Lash Slick give me my desired length and subtlety with a drier texture? I couldn't wait to find out, and ordered it about a month ago. I've worn it almost every day since, which tells you something. 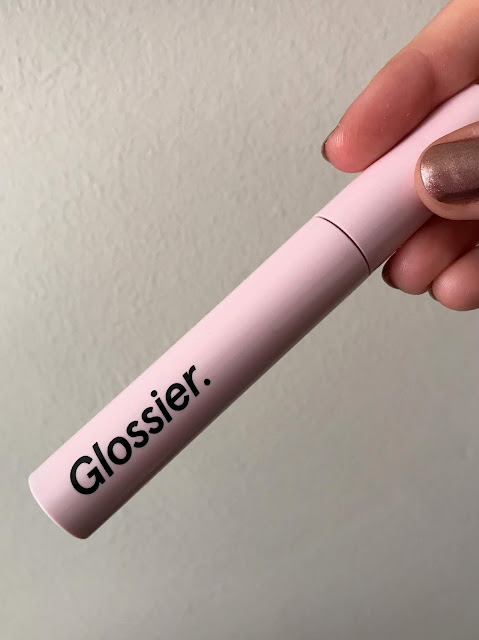 As I mentioned in my MegaLength post, I'm reluctant to pay more than drugstore prices for a product as short-lived as mascara, and Lash Slick is $16. I probably would have ordered it even without store credit, given the difficulty I've had in finding a good subtle mascara, but the price point is a little steep for my usual taste. That said, Lash Slick is cheaper than other mascaras from mid-priced brands: Too Faced Better than Sex is $23, while Benefit Roller Lash, MAC Haute and Naughty, and Urban Decay Perversion are all $24. Lash Slick gives you 0.29 oz. of product compared to Benefit's 0.3 and Urban Decay's 0.4, so it's a comparable size for significantly less money. I'm really pleased about this, given Glossier's record of charging mid-range prices for deluxe-sample-sized products (looking at you, Generation G). 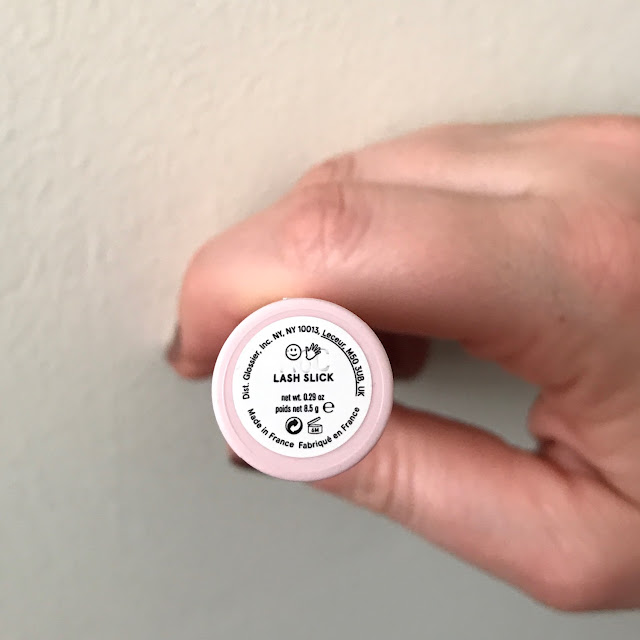 Glossier describes Lash Slick as "the perfect everyday mascara," water-resistant but not waterproof. It "curls and sculpts as it lengthens, enhancing the look of your natural lashes instead of clumping them together or spackling them in product." This effect is the result of "teeny-tiny fibers [that] coat lashes from root to tip to create a lengthened baby-extension, while flexible film-forming polymers lift and lock each fiber into place." (Indeed, the Lash Slick box advertises its contents as "film form mascara," whatever that's supposed to mean.) In other words, this is a fiber mascara that's made to look subtle but still deliver the look of "lengthening baby-extension[s]," a phrase that, like much of Glossier's copy, could have used some editing for clarity. Awkward wording aside, that description sounded promising, given my taste in mascara.

I was pleasantly surprised to find the Lash Slick tube thicker and heavier than other Glossier packaging I'd encountered. Here's Lash Slick between a Lidstar eyeshadow (left) and a Generation G lipstick: 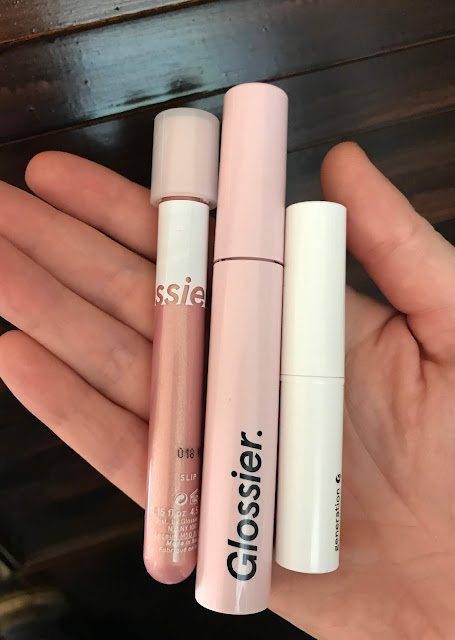 Lash Slick is a little bulkier than Wet n Wild MegaLength, though at least it doesn't bulge out in the middle like other mascaras I've tried. It slides nicely into the glass jar I reserve for mascara, eyeliner, and stick/liquid eyeshadows. 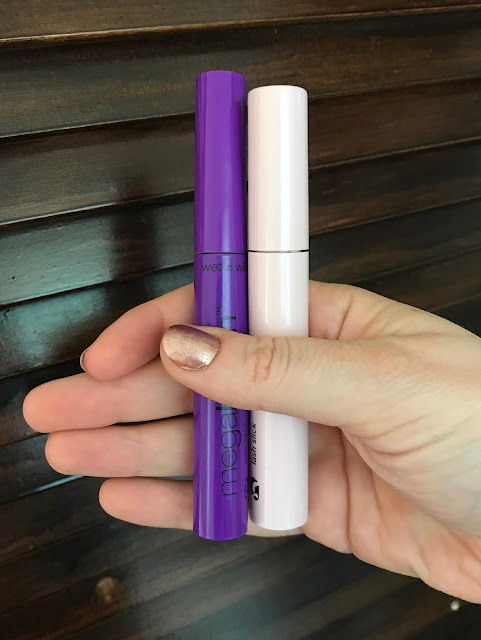 The Lash Stick brush is long and straight, with short, densely packed bristles: 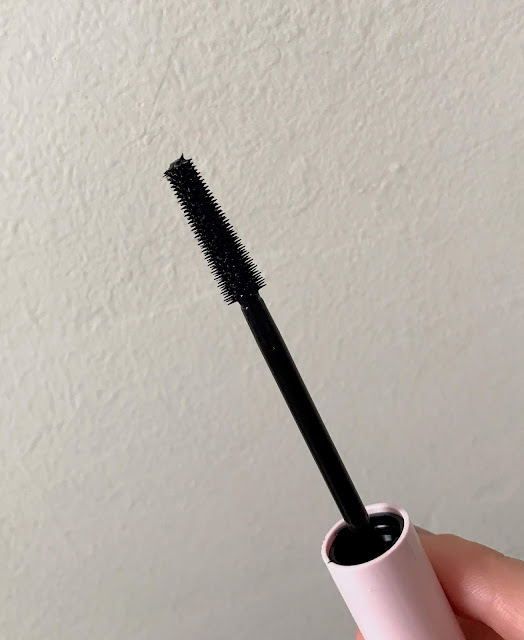 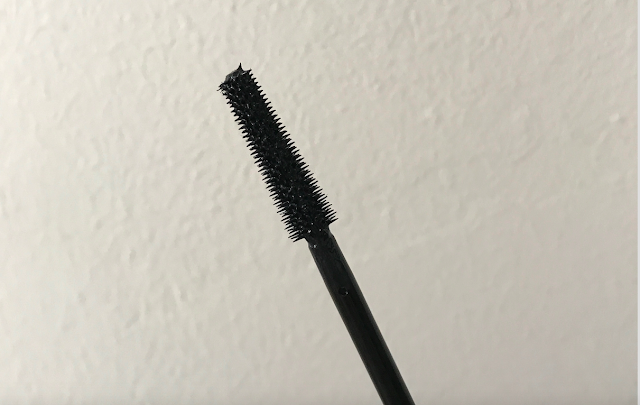 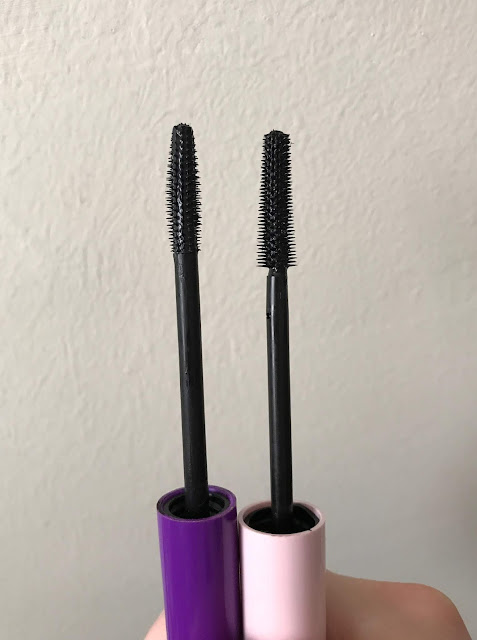 Lash Slick comes in just one color: black. While that certainly simplifies the decision process and spares me the usual stress of having to choose between "Black," "Black Black," "Blackest Black," and "Noir Black," I find it odd that Glossier doesn't offer any other shades. Boy Brow debuted in black, brown, and blonde, and you'd think Lash Slick would offer a similar range.

I don't find mascara reviews very helpful without direct comparisons, so I spent a day wearing Lash Slick on one eye and MegaLength on the other. First, here are my lashes without mascara. They're decently thick, but the tips are so light as to be almost invisible, which is why I prefer lengthening to volumizing mascara.

And here's Megalength on my right eye (your left) and Lash Slick on my left eye (your right):

Obviously, MegaLength is darker and more dramatic (I have the darkest shade, Very Black), and at least in this photo, it seems to have done a better job of lengthening. However, when you look more closely at the Wet n Wild eye, you notice that some of the lashes are clumping together or bending in strange ways. (Ordinarily when I wear MegaLength, I use a clean spoolie to separate and straighten out my lashes.) 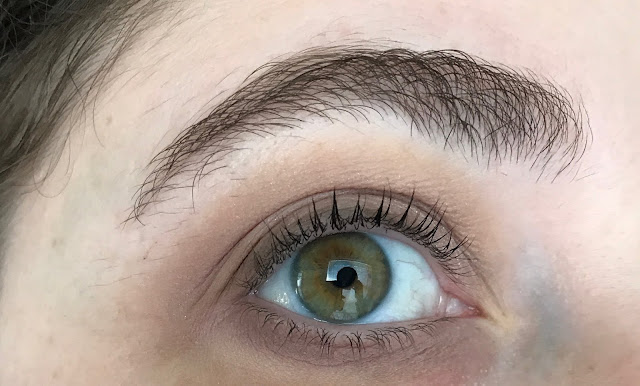 And here's a closer view of Lash Slick. You can see here that it's lengthened my lashes just as much as MegaLength has, but without sticking them together. Only one lash looks a bit wonky: 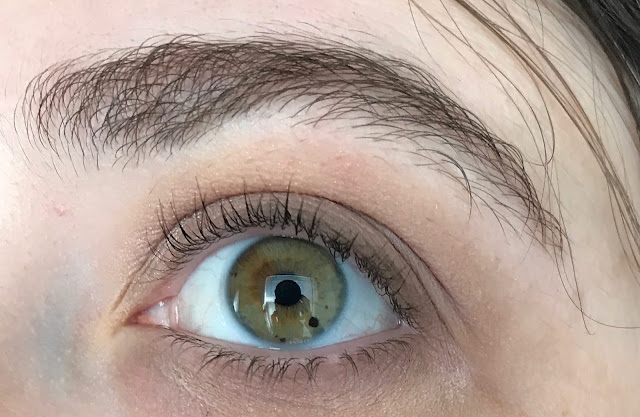 Here are my closed eyes. MegaLength has left some flecks of product in my crease, which often happens because the formula takes a minute or two to dry. Lash Slick has a much drier formula.

And a full face. Again, Wet n Wild on your left, Glossier on your right:


Glossier claims that Lash Slick lasts all day and comes off easily, and I've found both of those claims to be true. It does start to flake off in tiny fibers around the eight-hour mark, but it holds up almost perfectly until then, and I can attest that it stands up to sweaty workouts, 100% humidity, and long crying sessions. (Sidenote: what do you call the crisis between quarter- and midlife crises?) I had some trepidation about the concept of a fiber mascara (a phrase that evoked nightmare visions of Younique spider lashes), but Lash Slick is pretty similar to other mascaras, including MegaLength, in the way it comes off. (MegaLength has about the same wear time, though it's less resistant to sweat/tears/Jersey humidity.) Here's Lash Slick looking pretty rough after 11 hours, but I have yet to find a lengthening mascara that doesn't look like this—or worse—after 11 hours. 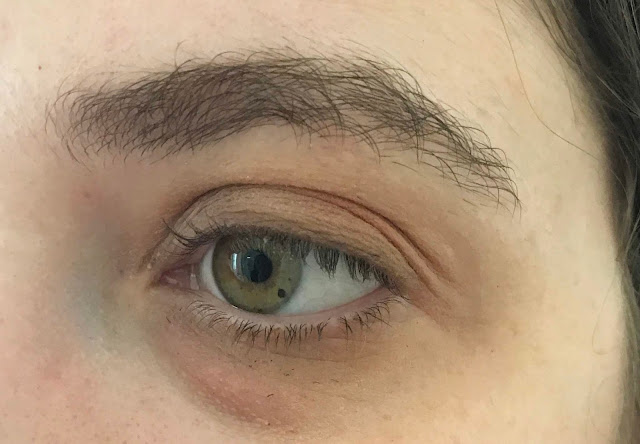 MegaLength reaches a similar level of flakiness after just six and a half hours (granted, the flakes are smaller): 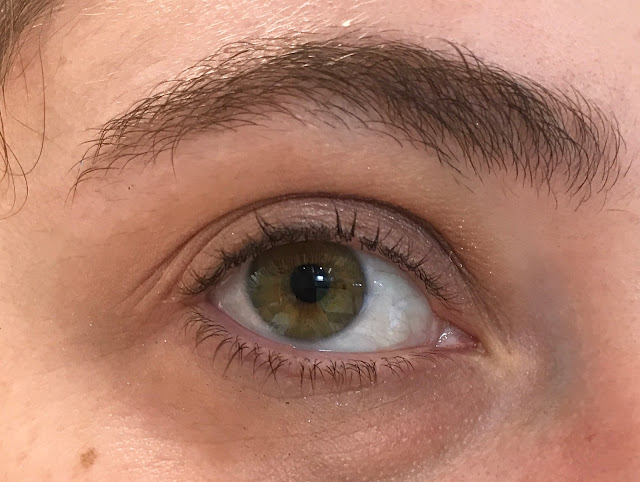 And here is where I set aside my usual Glossier snark, because Lash Slick is really fucking great. A+. 4.98/5. It's not only the best Glossier product I've ever tried, but also the best mascara I've ever tried. It's just about perfect, and you know how much it pains me to say that about a Glossier product. Now all Glossier needs to do is expand Lash Slick's shade range, and we'll be all set. For now, if you're looking for a subtle mascara that lengthens and separates lashes, look no further: you've found it.
Posted by auxiliary beauty at 8:22 PM