Oh, Bite Beauty. The intensity of my love-hate relationship with this brand is second only to that of my love-hate relationship with Glossier. On paper, Bite is my ideal beauty brand. It makes nothing but lip products, offering a wide range of complex, well-balanced colors. It releases thoughtful, interesting limited-edition collections, most of which are available for months. Its lipstick formulas are comfortable on my often-dry lips. Yet I've had consistently bad luck with Bite lipsticks, due to their slipperiness and tendency to transfer absolutely everywhere. (See my review of Lavender Jam, which I ended up giving away.) So when Lena of Faceonomics got sent Bite's Spice Things Up collection and very generously offered to give me the two coolest-toned shades, I felt a mixture of excitement and trepidation. I said yes (I mean, obviously), but I was prepared for disappointment. 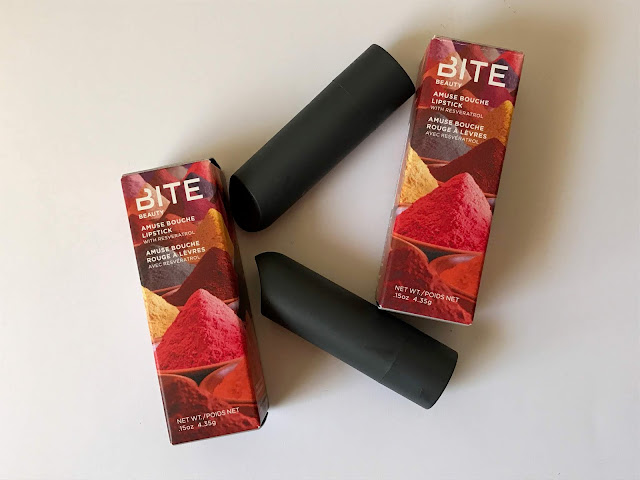 The Spice Things Up collection (what a lazy name, honestly), inspired by "the warm shades of toasted spices," contains eight lipsticks in Bite's standard Amuse Bouche formula. Like the permanent Amuse Bouche lipsticks, they retail for $26 each. It would be cool if each lipstick smelled like the spice it represented, but all the lipsticks have Bite's usual sweet lemon scent and taste, which I don't mind at all. (It reminds me of lemon bars, one of my favorite desserts.) This collection is limited edition, but it was released two months ago and is still fully in stock, at least on Sephora's American website. The lipsticks come in Bite's standard dark-gray matte tubes, but the boxes, printed with mounds of colorful spices, are genuinely beautiful. 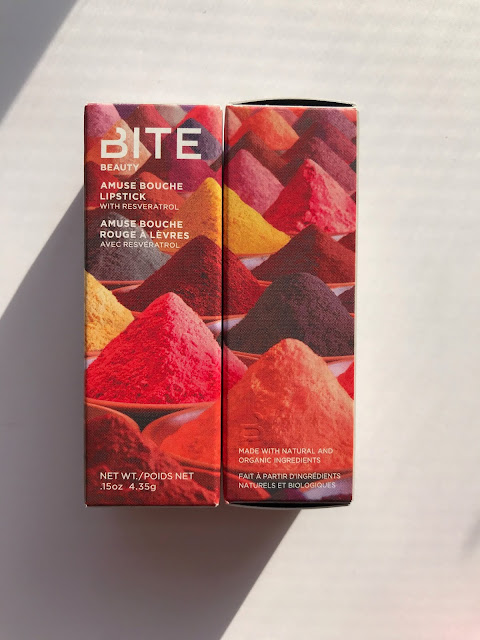 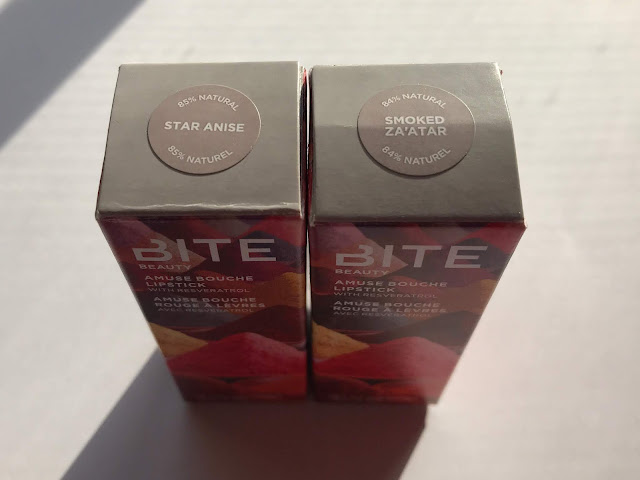 The two shades that Lena sent me are Smoked Za'atar, which Sephora describes as a "plum-chocolate," and Star Anise, a "muted lavender." 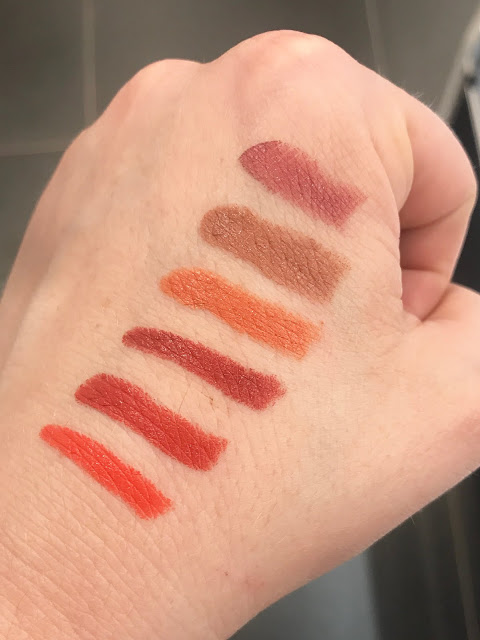 Alas, not all the shade names correspond exactly with the spices that inspired them. As you probably know, real star anise looks like this: 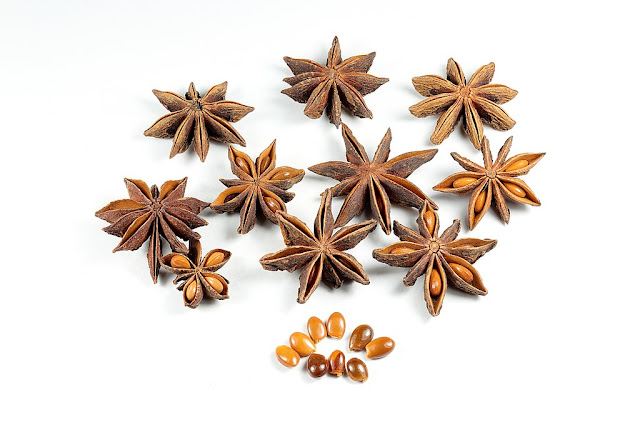 I mean, fine, creative license and all that; Bite wanted to make a lavender-tinged lipstick and there aren't many lavender-tinged spices. But the name "Smoked Za'atar" doesn't even make sense on its own terms, because there's no such thing. I did a quick Google search and found that the word "za'atar" can refer to a specific herb related to oregano and thyme (Origanum syriacum) or, more commonly, a Middle Eastern spice mixture including that herb. Like masala, za'atar differs in composition from region to region, but there's one constant: the spices are toasted or sun-dried, not smoked. You can't go into a store and buy "smoked za'atar" as you can smoked paprika. Sure, this is a small detail, but it makes the name of the lipstick feel like lazy orientalism. At least Bite got the color semi-right:


Sephora's color descriptions for these two lipsticks are accurate for warm-toned people: on Christine of Temptalia, for instance, Star Anise and Smoked Za'atar do indeed look like a "muted lavender" and "plum-chocolate" respectively. Combined with my cool grayish undertones, however, both shades lean much warmer. On me, Smoked Za'atar is a deep neutral brown with hints of yellow and purple, while Star Anise is a gray-toned true nude, close to my skin tone and almost identical to my previous HG nude, Bourjois Rouge Edition in Beige Trench. This was an exciting discovery: I destashed Beige Trench earlier this year because I hated the chemical-floral fragrance, but I was hoping to find a similar nude lipstick eventually. Here's Star Anise swatched on the left and Smoked Za'atar on the right, first in shade, then in direct sunlight: 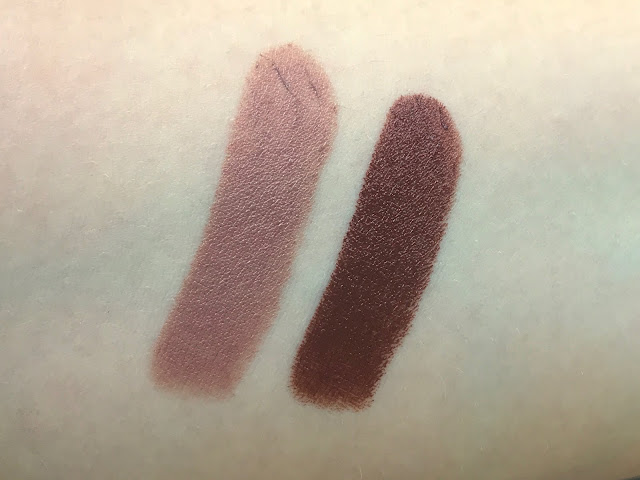 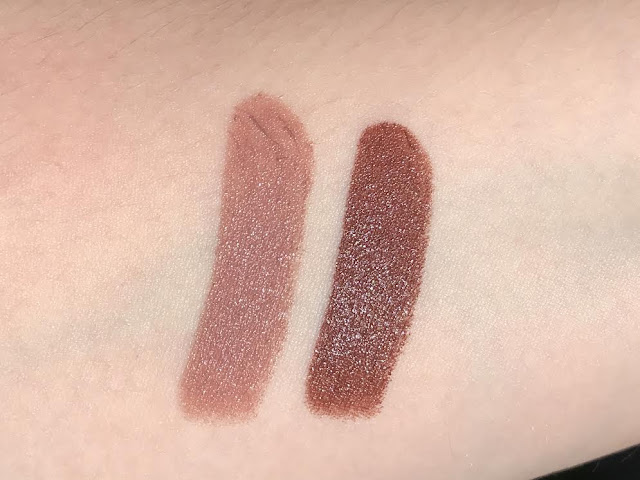 Let's start with the review for Smoked Za'atar, since it was the one I tried first. Photographed on its own, it does indeed look like a plummy brown... 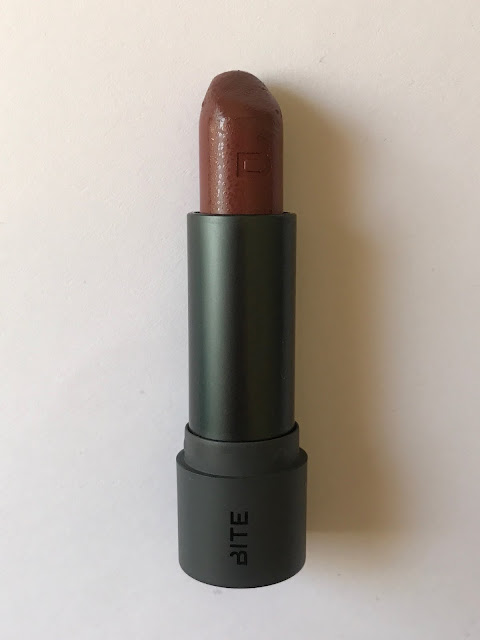 ...but when it's swatched next to other brown lipsticks, its yellow tones come through. Below, L-R: MAC Antique Velvet, Smoked Za'atar, Revlon Fierce,  and Maybelline Raging Raisin, in shade and sun. If you look closely at SZ, you can see a bit of yellow at the edges of the swatch. 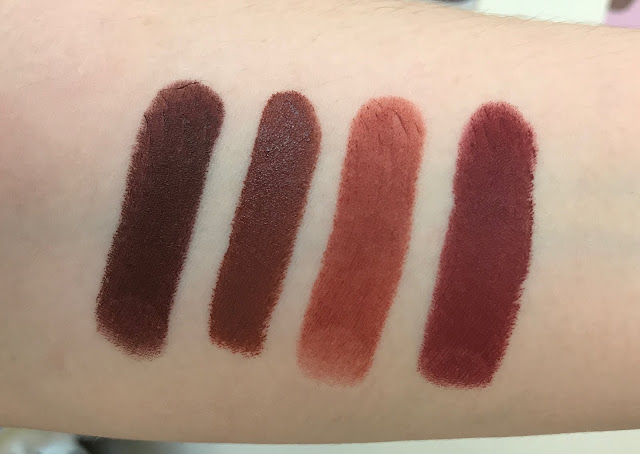 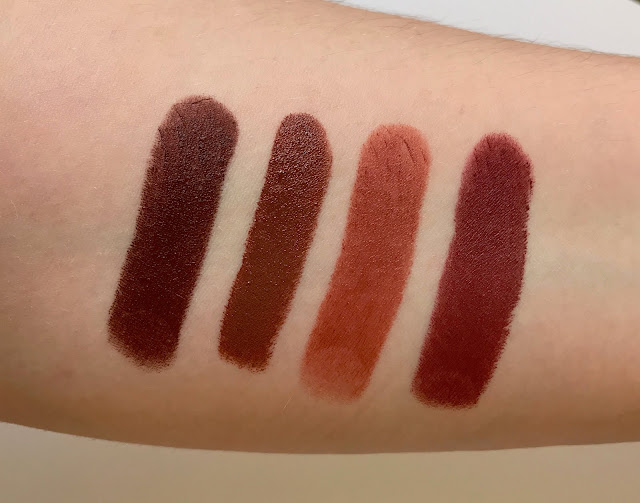 I've now worn Smoked Za'atar twice, with a lip liner and without, and I'm sad to report that it suffers from the same weaknesses as the other Bite lipsticks I've tried: it's a tiny bit streaky on my lips (as dark lipsticks often are), and it transfers very easily. As you might be able to tell from my swatches, it has a shine that Star Anise lacks, which unfortunately translates into slipperiness. Here's a (slightly out of focus, sorry) lip swatch; you can tell that it feathers without a liner, a problem that I don't usually have with lipsticks. 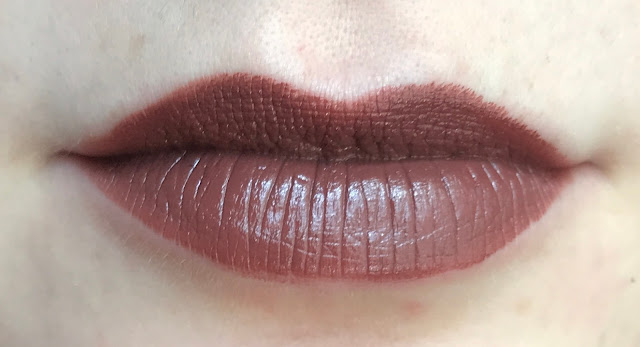 And here's SZ (can't help thinking of the Barthes treatise, lol) with ColourPop Lippie Pencil in Taurus, which makes the lines look a bit cleaner: 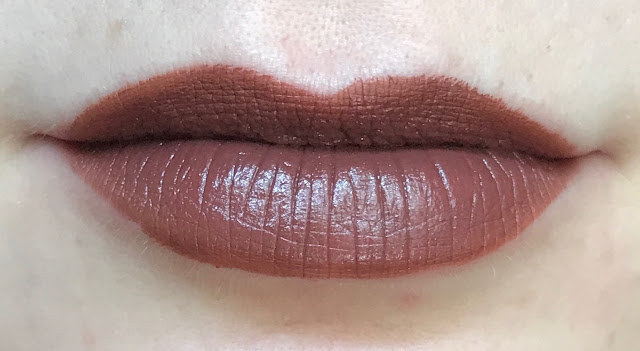 The formula isn't a dealbreaker by any means, but I think I'll wait until the fall to wear Smoked Za'atar regularly. Both in the tube and on the lips, Bite lipsticks tend to soften in heat and firm up in cold, and SZ will probably transfer less in cooler, less humid weather. In the meantime, here's an FOTD with mustardy eyeshadow and nightmarish humidity hair: 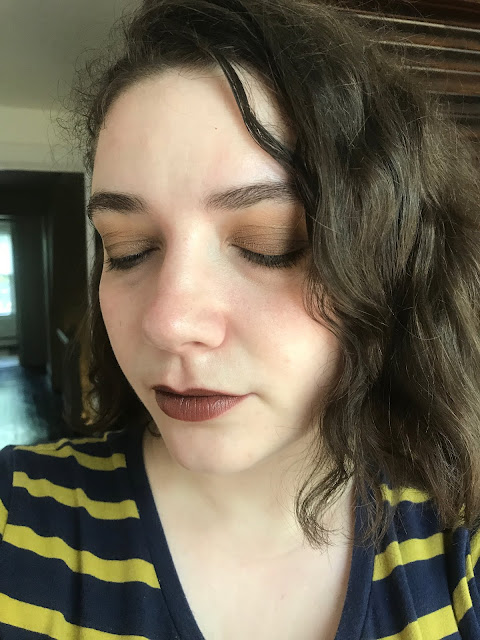 And with tamer hair and a reddish eye look (all I can remember is that I was wearing ABH Red Ochre in the crease): 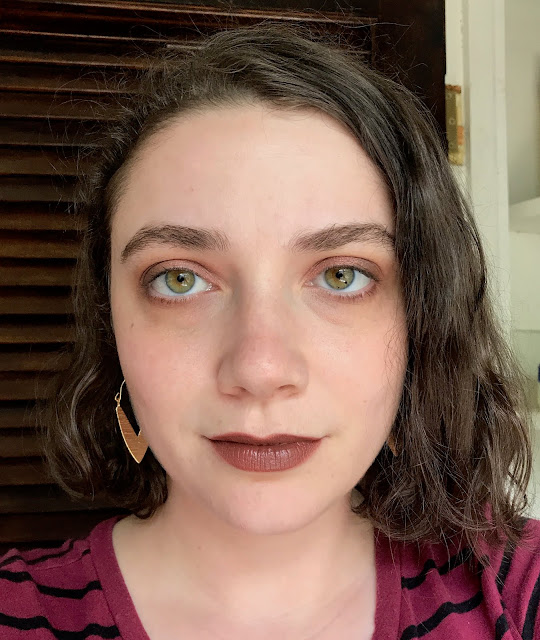 Star Anise, on the other hand, is an absolute delight. It might be my favorite new lipstick of 2018 so far, and it's certainly made me rethink my entire relationship with Bite. 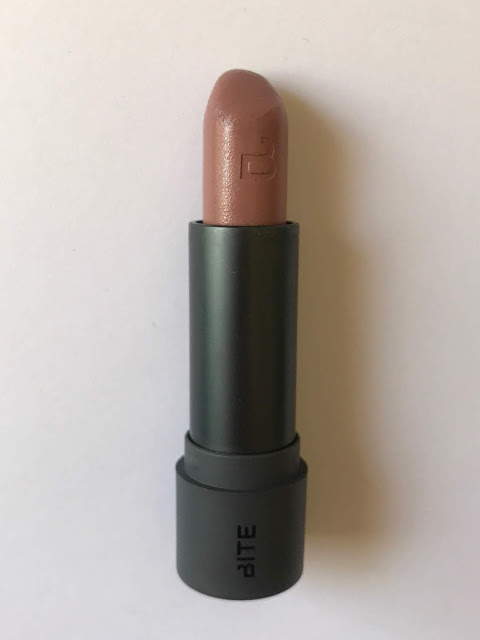 I couldn't have found a more suitable nude lipstick if I'd asked Bite to design one especially for me. I worried that it might be too similar to my other nude-ish lipsticks, Milani Matte Naked and Pat McGrath Madame Greige. But next to Star Anise, Matte Naked looks almost peach (and it's one of the cooler-toned nudes at the drugstore!), while Madame Greige looks straight-up purple:


Here it is on my lips; it's less shiny (thus less slippery) than Smoked Za'atar, but it still has a definite shine. I have yet to see a truly matte lipstick from Bite. 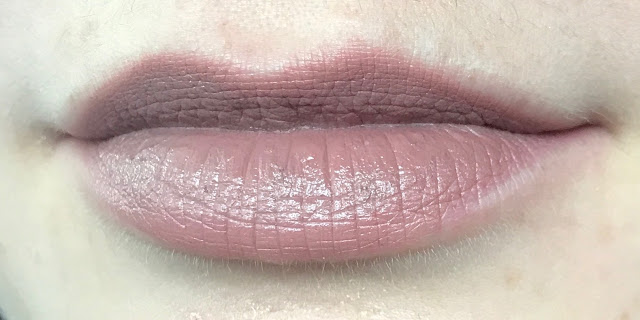 SA lasts a surprisingly long time for a nude lipstick: three or four hours of everyday wear (with drinking, talking, etc). And because it's so close to my skin tone, it looks perfectly natural as it fades. Both Smoked Za'atar and Star Anise are extremely comfortable to wear; they're not actively moisturizing, but they don't leave my lips feeling dry, either.

Here's Star Anise on my face just yesterday, with a few Modern Renaissance shades on my eyes and Glossier Storm on my cheeks: 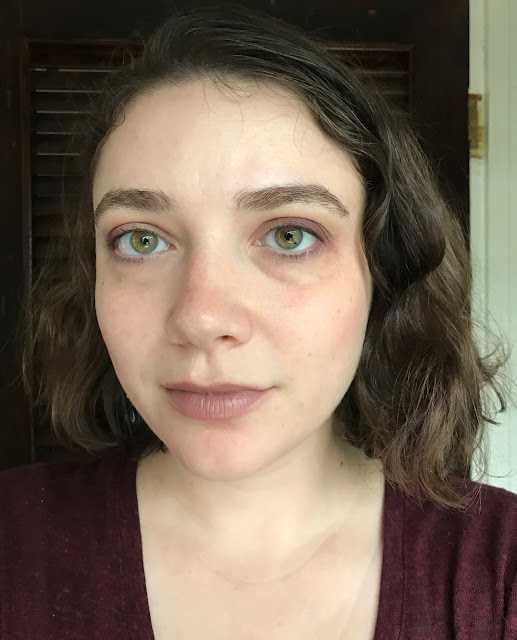 And a few weeks ago, with Glossier Lily on my lids and Illamasqua Zygomatic on my cheeks. I've been meaning to write a quick review of Lily and Slip, but there's been so much Glossier on my blog this year that I wanted to give it a rest for a few posts. 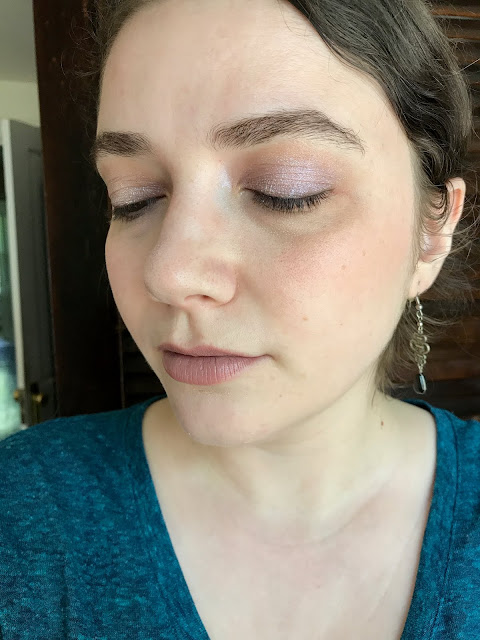 After my positive experience with the Spice It Up collection, I'm going to be paying more attention to Bite's future releases. I'm already contemplating buying one of the Prismatic Pearl glosses, possibly Rose Pearl (which I've swatched in Sephora: it's gorgeous) or Oyster Pearl. For now, though, I'm just happy to have two reasons not to dislike Bite anymore.
SaveSaveSaveSaveSaveSave
Posted by auxiliary beauty at 2:29 PM