Note: I purchased these products with store credit earned through my Glossier affiliate link. I am not a Glossier rep (and never will be), and these opinions are entirely my own.

Glossier's Generation G lipstick is aptly named, though that aptness is accidental: the sheer matte lipstick is now in its third generation, having been reformulated and repackaged twice since its debut in early 2016. The newest version of Gen G still costs $18 and still promises "the look and finish of just-blotted lipstick, without the blot," but Glossier claims that the revamped lipsticks boast "a smoother, softer, more cushion-y texture," a "truer matte finish," and "stronger, more luxurious packaging."

The thing is, Glossier has made these claims before: in October 2016, to be precise, when they advertised the second generation of Gen G as "more gliding and sleek" and "even more luxurious and comfortable over time," with "reworked packaging that keeps your Gen G fresher for longer." That version became notorious for its brittle packaging, with a cap that cracked when you looked at it a few seconds too long. The Gen G product page was flooded with negative reviews for over two years (kudos to Glossier for not deleting those reviews, I guess?), and I suspected it was only a matter of time before a re-revamped Gen G appeared. And so it did last month, just in time for Black Friday.

After some dithering (should I trust Glossier's claims when their first revamp flopped so hard?), I ordered two new Gen Gs: Jam, a bright plum that I'd owned in the first-generation formula, and Zip, a new-to-me orange-red. 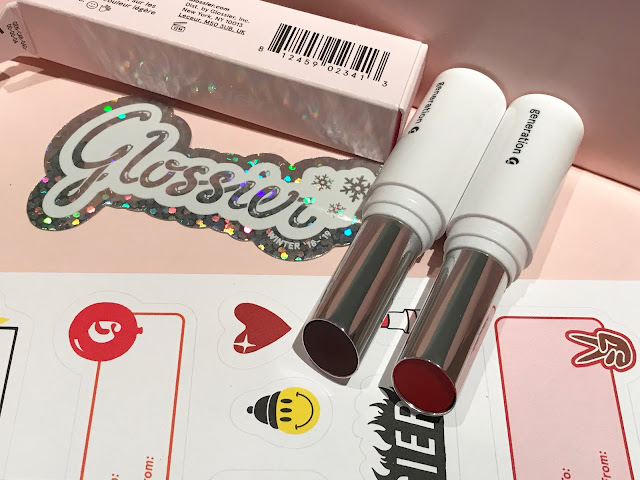 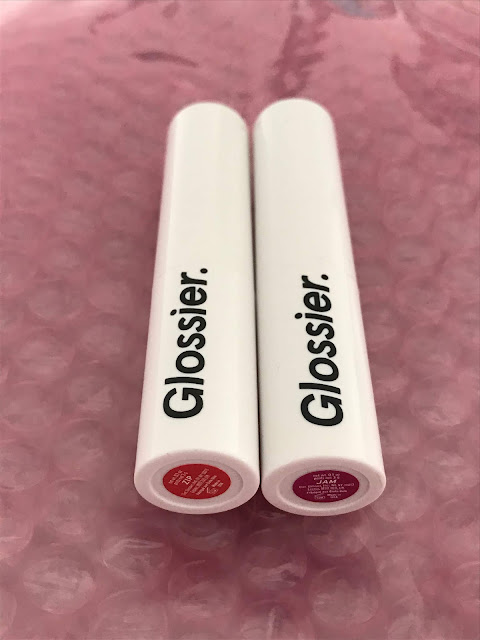 I've now tried two shades from each of the three generations: Jam and Cake from the first, Like and Leo from the second, and Jam and Zip from the third. Generation G has never been my favorite Glossier product, but I liked Jam and Cake enough to use them up completely (it helped that they were tiny and I had to reapply them several times a day). I bought Like and Leo this past summer but never reviewed them: Leo was a warm-toned brown that looked awful on me, so I sent it to an Instagram pal, and Like just didn't make enough of an impression to get a full writeup on my blog, though I still wear it occasionally. But now that I own two of the new Gen Gs, I'll use this post to compare the three formulas. The obvious caveats apply: I no longer have the two shades from the first formula, and it's hard to compare a shade that's supposed to be sheer and natural (Like) with two shades that are meant to be bolder (Jam and Zip). But I'll do my best! 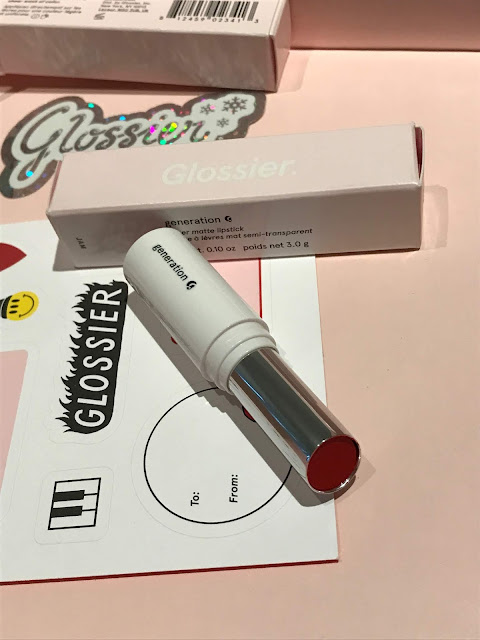 For my full assessment of the first-generation Gen G formula, check the blog posts I've linked above. The tl;dr version is that the formula was good: it faded quickly, which was only to be expected, but it gave an easy, attractive matte tint effect without drying out my lips. However, the size and price point were shameful. $18 for 1.1 grams? That's about 1/3 the size of a normal full-size lipstick! And the bullets of both Jam and Cake popped out of their tubes within a few weeks, so I had to be extra-careful when taking off the caps, lest the lipsticks fly onto the floor and get a dust bath.

I was less pleased with the second-generation formula. The first big change was the smell. The earliest generation had been basically scentless, with just the faintest hint of clay. The reworked Gen G smelled and tasted like cooking oil that had been used to fry donuts and then left in the pan all day. The formula didn't feel "more gliding and sleek," either: if anything, it felt more drying. And, of course, there was the problem of the fragile packaging. The one big improvement was the almost 100% size increase, though the price stayed the same at $18.

And now here we are two years later. A lot has happened in those two years. We're all more exhausted and cynical. The bubble of influencer hype is close to popping, if it hasn't popped already. As a culture, we are--I think, I hope--more reluctant to trust brands who act like our friends. (Can we talk about how Glossier's Instagram bio now describes the company as "a people-powered beauty ecosystem"? Vom.) At the same time, I can't deny that Glossier has released some killer makeup this year. Lidstar is the rare eyeshadow that can stand up to Jersey summer humidity; Lash Slick is my new holy grail mascara; and I've been wearing Cloud Paint in Storm almost every day since August. So, while I didn't fully believe the hype about the new Gen G, I was more willing to believe than I would have been at this time last year. 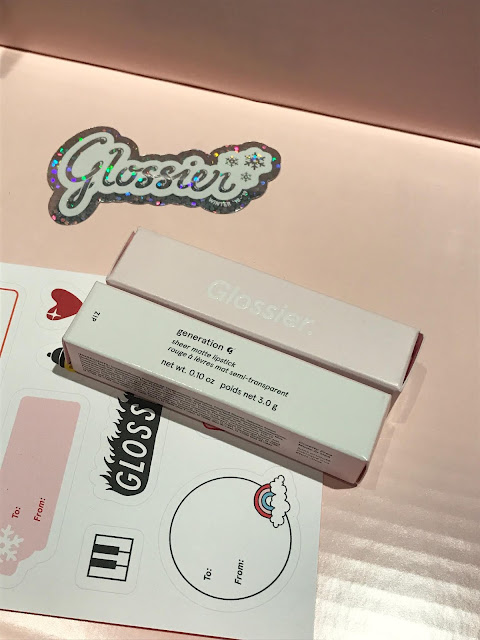 The most dramatic change, of course, is to the packaging. Glossier has finally coughed up a few extra cents per unit and introduced metal to the tube. I'm still not in love with the Gen G aesthetic: the new tube looks a bit MLM-y, a bit Beautycounteresque (though that might be my own bias against the Glossier rep program). But I can't deny that these tubes are superior to their predecessors. They're thicker and heavier; they finally look and feel like $18 lipsticks, not like factory prototypes or Sephora samples. 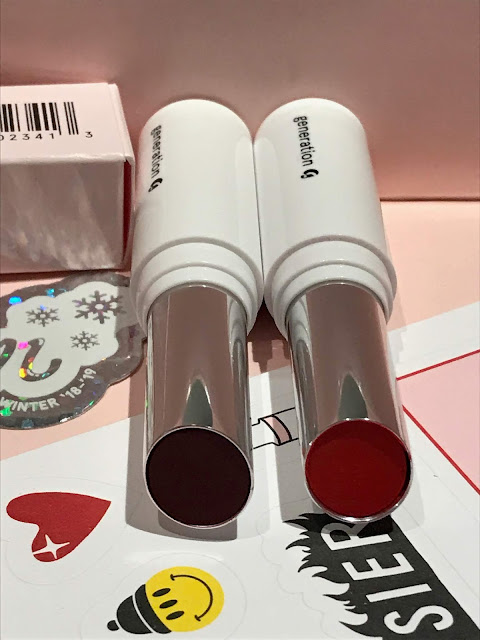 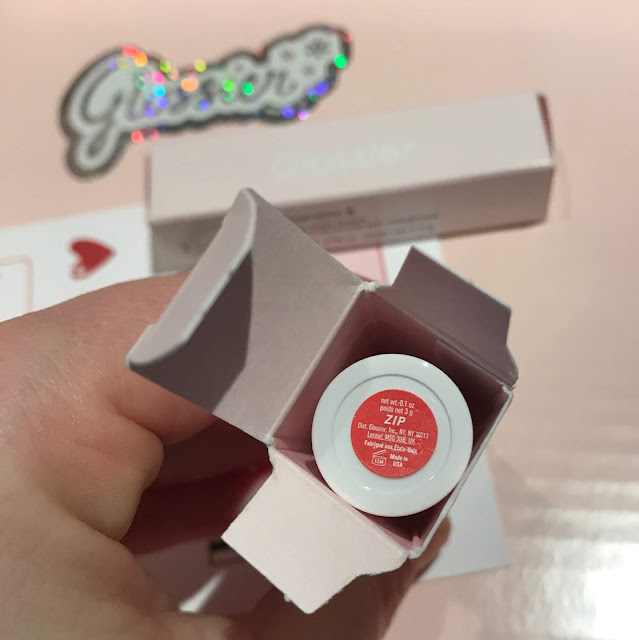 Here's a new tube (top) compared to a second-generation one (note the cracked cap of the latter): 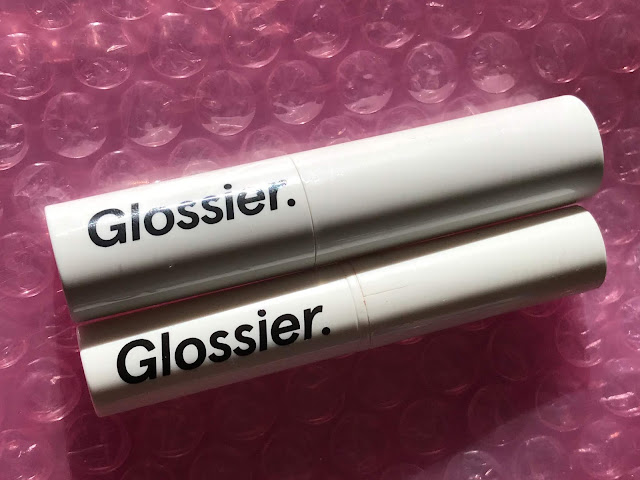 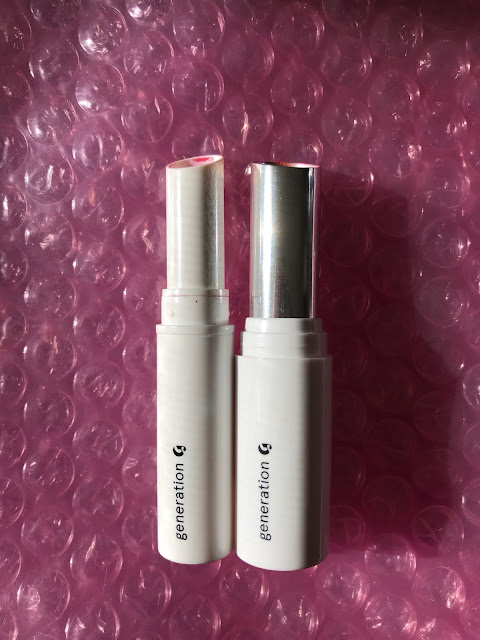 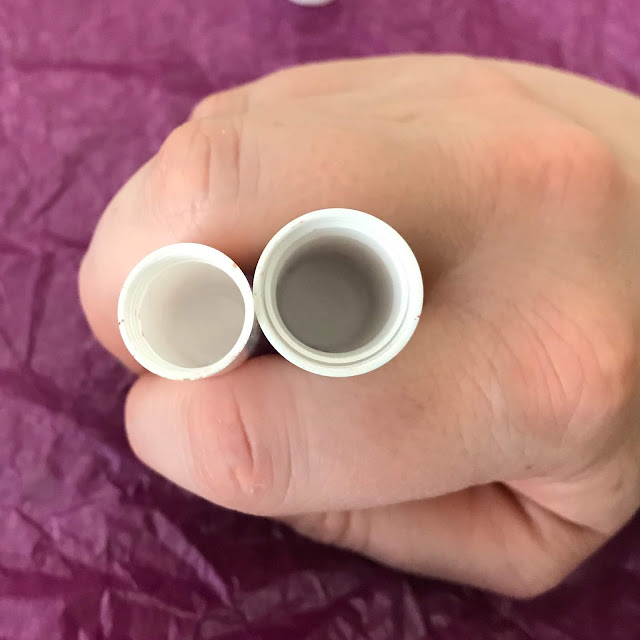 There's also been a size increase of 50%, from 2 to 3 grams. Accordingly, the new bullets are wider, which I hope prevents the breakage that bedeviled the first and second generations. 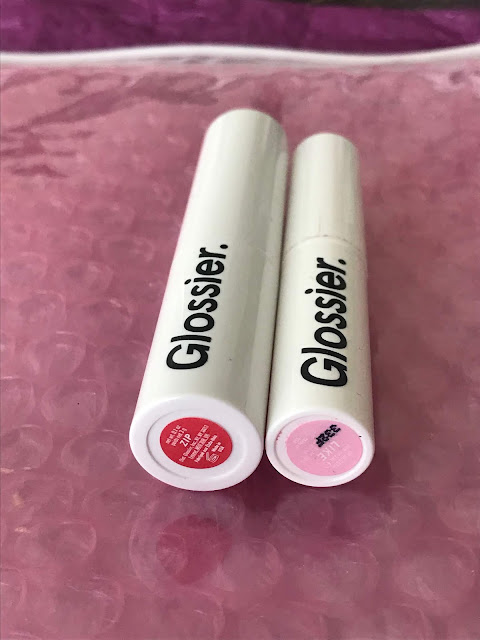 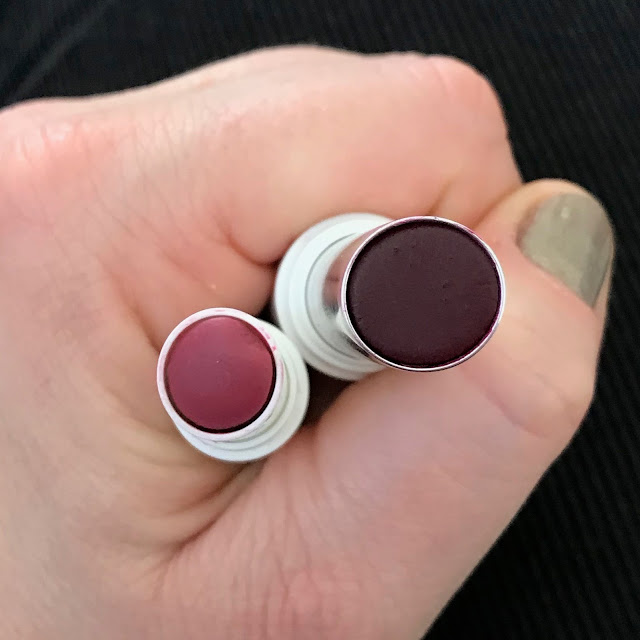 A third big change: the fragrance. For Generation 3, Glossier added a strong rose scent that doesn't quite cover the stale-cooking-oil funk. I almost never like floral scents in makeup, and this one is no exception. The good news is that it dissipates about ten minutes after application, but I'm still disappointed that it's there.

The new Gen Gs seem to be the most pigmented of the three generations. My old Jam never got even close to opaque, no matter how many layers I swiped on. My new Jam delivers a respectable (though still sheer) amount of color after just one swipe. Below, Jam and Zip swatched with one, two, and three layers: 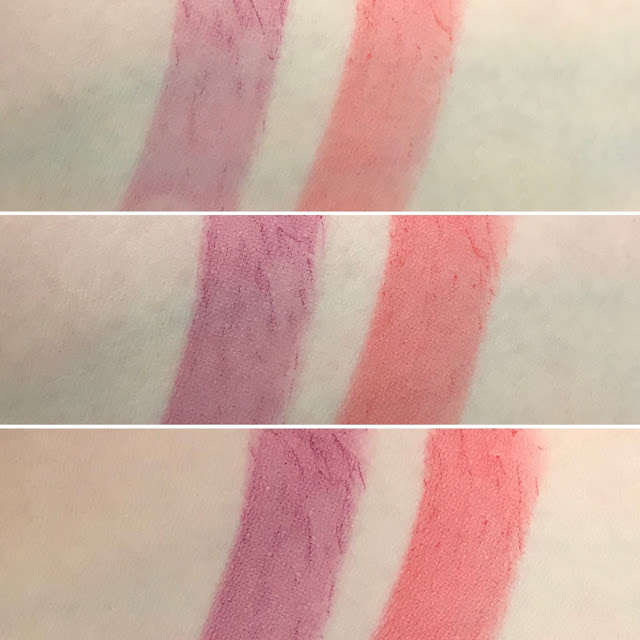 As you might be able to tell just from these arm swatches, the formula is quite dry, clinging to every unevenness on the skin of my inner forearm, which I promise is no more textured than the skin of the average human forearm. Generations 1 and 2 had a little more slip, but the new formula is very matte, exaggerating lip texture and forming tiny clumps of pigment. Here I am wearing one, two, and three layers of Jam. My lips were especially dry that day, and you can see that as I add more layers, the result looks drier and blotchier. This is far from the "smoother, softer, more cushiony texture" that Glossier promises. 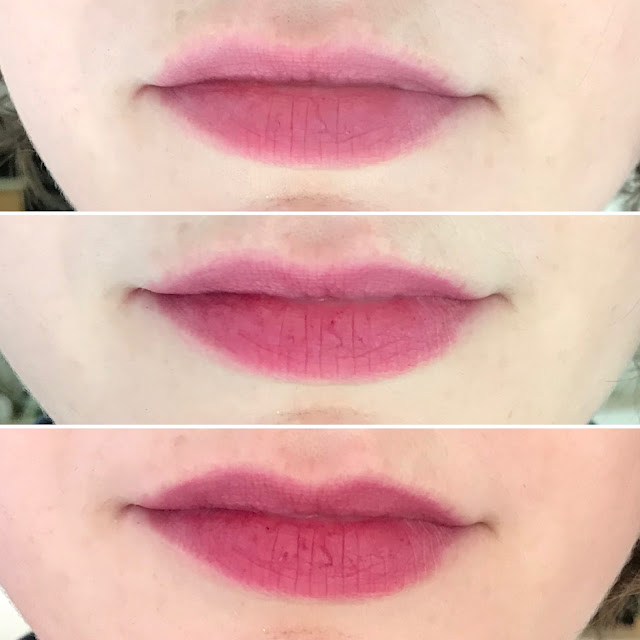 Same deal with Zip, below: 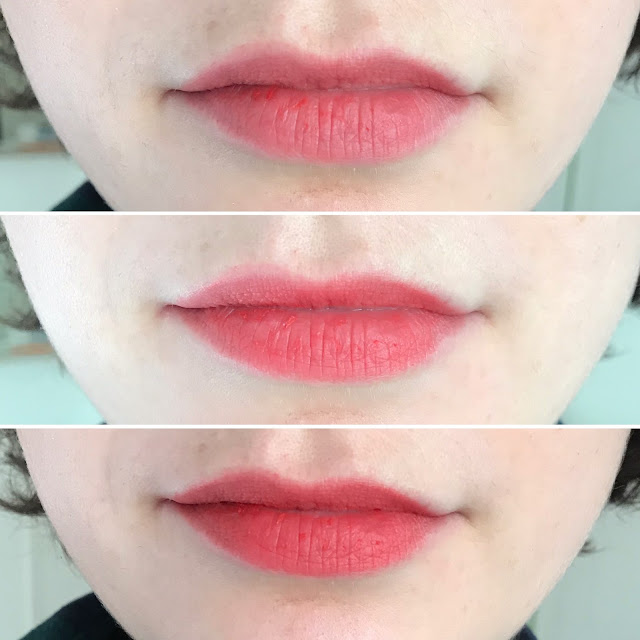 Zip looks rougher and drier than Jam on my mouth; accordingly, it feels more drying than Jam as the hours pass. I struggle to make it cling to the inner portion of my lower lip, as you can see in the third lip swatch. Jam is marginally more comfortable, though still drying. For both shades, I'd recommend a thin layer of lip balm before application, especially in the winter months. The formula also feels tacky and waxy when I press my lips together. Both Jam and Zip last for a few hours before fading, which is what I would expect, but Jam fades more gracefully. 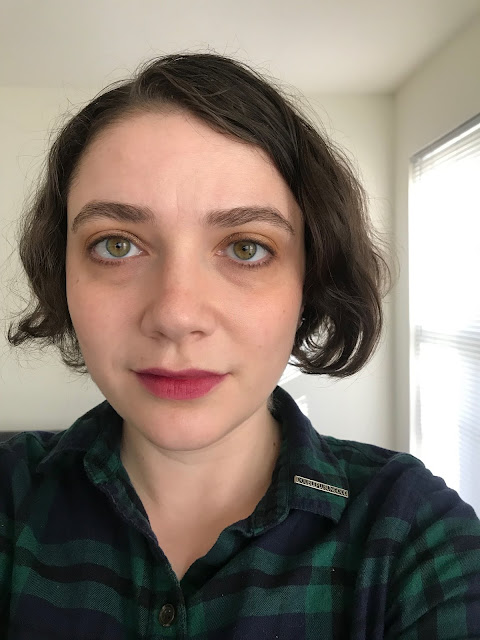 I was curious how Jam compared to my other sheer plum lipstick, Urban Decay Seismic. It turns out that Seismic is darker and cooler-toned than Jam. Needless to say, it's also shinier and more moisturizing (it has a very fine microshimmer that doesn't show up on the lips). Here's Seismic (above) and Jam (below), in direct sunlight: 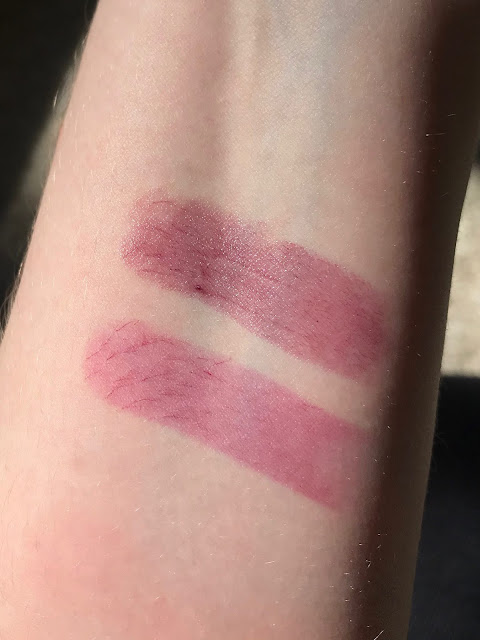 Zip leans more orange on me than I expected, though I shouldn't have been surprised: many warm reds turn Cheeto orange on my lips. I don't hate Zip on me, but I wish it were a bit redder and darker. 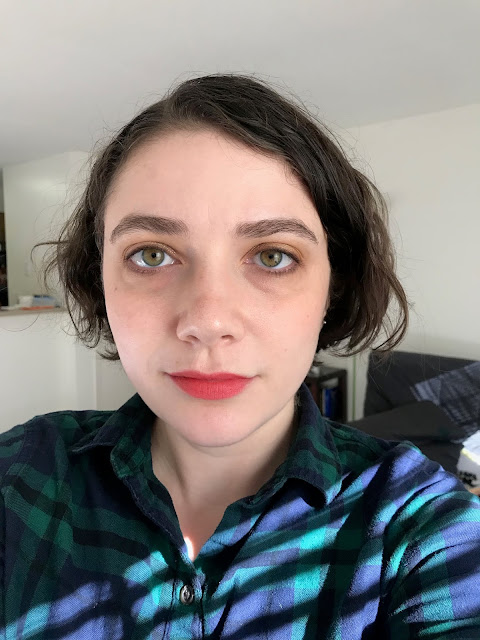 To sum up, here are the pros and cons of the new Generation Gs compared to the first and second iterations:

I'm afraid I can't recommend the new Generation Gs wholeheartedly. I can recommend them more enthusiastically than I could the previous versions, but they're still far from Glossier's best makeup product (that honor would go to Lash Slick or Cloud Paint). If there's a shade in the Gen G lineup that appeals to you (and your lips are generally in better condition than mine), I wouldn't dissuade you from buying it, but this product still has too many flaws to qualify as a must-have. Though the quality of the packaging has certainly improved, the quality of the formula has declined. And I'm not alone in that opinion: check out the reviews on Glossier's product page. Anyone want to take a bet on the launch date of the fourth version?
Posted by auxiliary beauty at 6:12 PM