Disclaimer: I purchased these products with store credit earned through my Glossier affiliate link. Thank you to everyone who has clicked on it and allowed me to buy products to review! I am not a Glossier rep.

In my initial Glossier Play review, I identified the Colorslide eyeliner in Early Girl as the standout product from my order, and mentioned that I wanted to pick up a couple more colors. So I did, and here's a quick review! 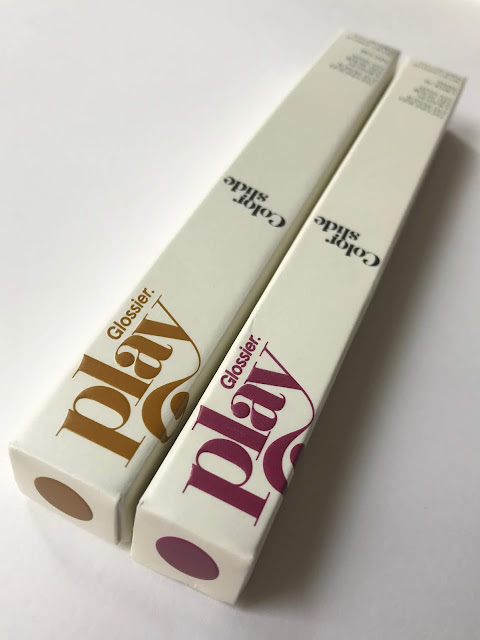 I placed my order last Thursday and it arrived on Saturday morning, which was kind of astonishing. (Glossier seems to have a warehouse fairly close to where I live, but their shipping usually isn't that fast.) For my second Colorslide order, I chose two matte pencils in shades I hadn't seen in other eyeliner ranges: Critical Mass, a magenta, and Nectar, a mustard yellow. I ordered them shortly after the release of Mango Balm Dotcom, so I received a sheet of cute Glossier fruit stickers, too! 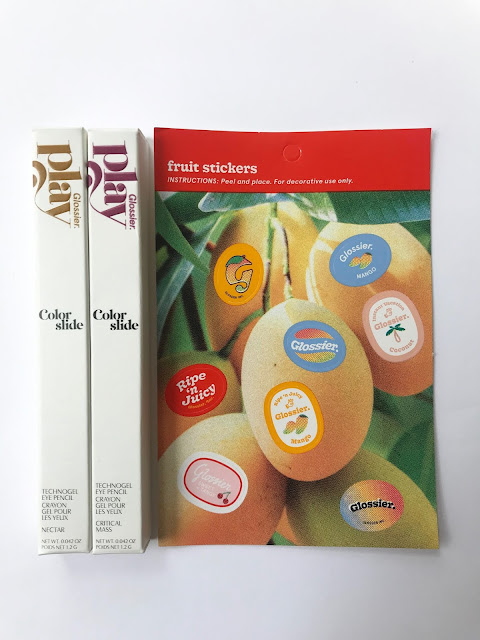 In the three weeks since I posted my review, I've read other people's thoughts on the Colorslide liners, and have noticed a fair bit of disappointment. (Check out the comments on this Instagram post.) The negative reviews confused me at first, since I'd had such a good experience with Early Girl, but then I took another look at the website copy. Glossier promises "a waterproof formula that dreams are made of: a highly pigmented, smooth gel eyeliner that doesn’t crease, smudge, tug, or skip and lasts for 12 hours (matte shades last in the waterline for 8 hours)...Draw a precise line to define the eye, or smudge and blend out for a diffused, smoky effect." About half of this description is accurate: Colorslide is waterproof, highly pigmented (though I can't speak for the shades I haven't tried), long-lasting, and great for precise, graphic looks on the lid and lashline. But it doesn't "smudge and blend out," and though I never wear liner on my waterline, I can't imagine Colorslide would be soft enough for that use. I don't know how Glossier is defining "gel," but Colorslide is waxy and stiffer than most non-gel eye pencils I've tried.

The thing is, if Glossier had just been honest about what to expect, far fewer customers would have been disappointed. But instead of being straightforward about the product's attributes, which are fine in themselves, Glossier chose to make a bunch of extra claims that don't hold up. These eyeliners are great for a specific purpose; why insist that they work for every purpose? Why make a ridiculous self-contradictory claim that the formula "doesn't...smudge" but also "smudge[s] and blend[s] out?" WHY, GLOSSIER?

Tl;dr: If you want eyeliners that work in the waterline and double as smudgy cream shadows, look elsewhere. Otherwise, keep reading.

I bitched about the extra plastic packaging in my previous post, so I'll just note here that it still exists and it's still laughably unnecessary. Let's hope Glossier makes good on its promise to phase out the plastic. On the plus side, I love how each pencil is housed in a box whose font matches the shade. That's such a thoughtful touch. 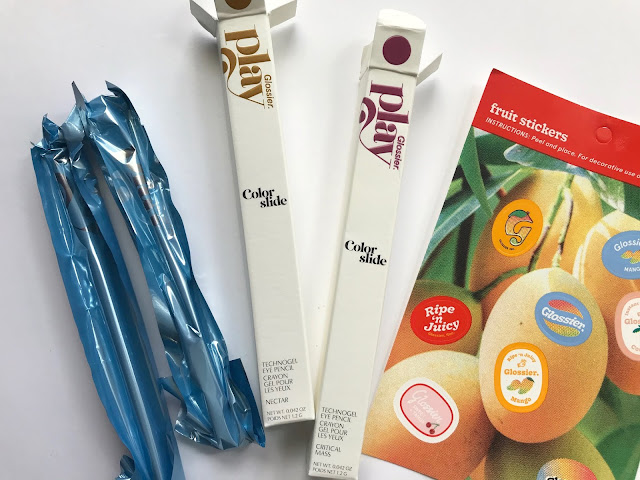 I still wish the eyeliners had opaque plastic caps instead of clear ones, but whatever, not a huge issue. 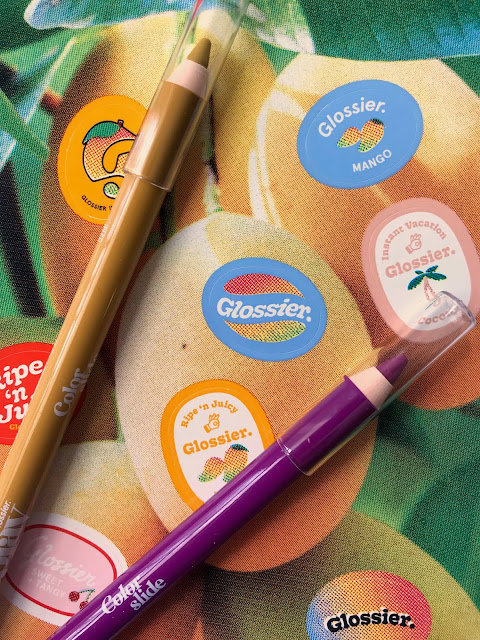 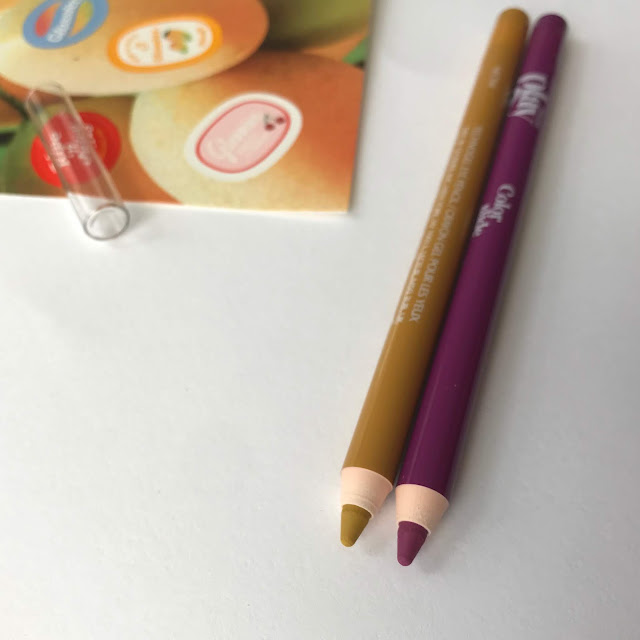 Here's a much bigger issue: the first time I tried to swatch Nectar on my arm, this happened. 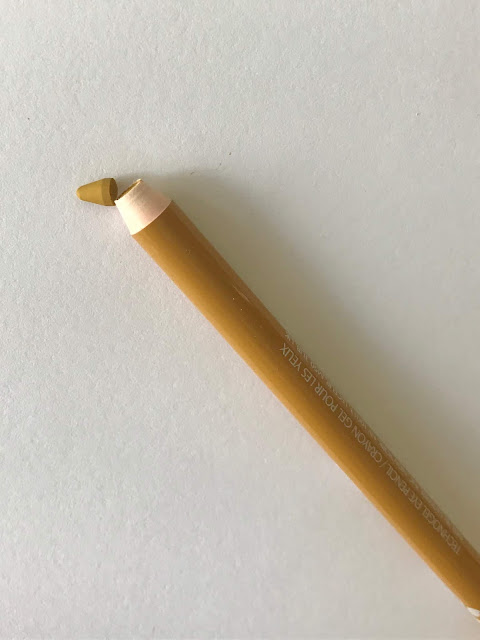 That certainly didn't bode well for Nectar's functionality, but after I sharpened the pencil, it swatched perfectly. I think some of the liners must have a dry, waxy outer layer that goes away after sharpening. Nectar has impressive pigmentation, with full opacity in one swipe; Critical Mass takes two or three passes. Here's two layers of Critical Mass (L, obviously) and one of Nectar: 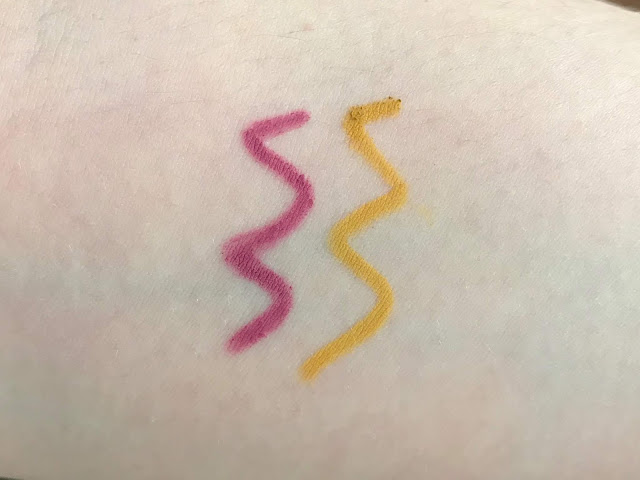 Since magenta is my favorite color, I had to try Critical Mass first. It's a little pinker than I expected, but the purple tone sets off my eyes nicely. I had to go over my lashline a few times for this level of intensity, and I was annoyed that so much product got on my lashes while absolutely no product made its way between them. Forget about tightlining with these pencils—it's not gonna happen, unless you're significantly more skilled than I am (which you could easily be). 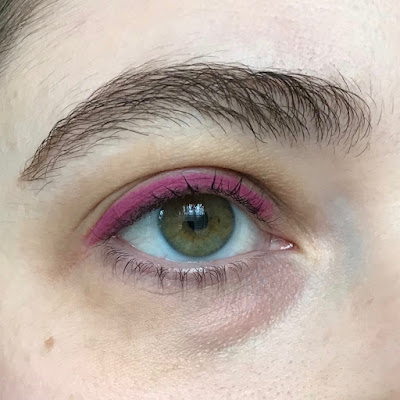 Next, I tried Nectar and Critical Mass on the upper lashline. Because the formula is so stiff, the colors keep their integrity even when placed right next to each other.

Yesterday, I wore a thick line of Nectar on its own. I actually wore this look to teach, which I wouldn't ordinarily do, but Nectar looked surprisingly subtle with an otherwise understated look. I paired the yellow liner with a dark purple sweater and Urban Decay Vice Lipstick in Seismic for a nice complementary contrast. 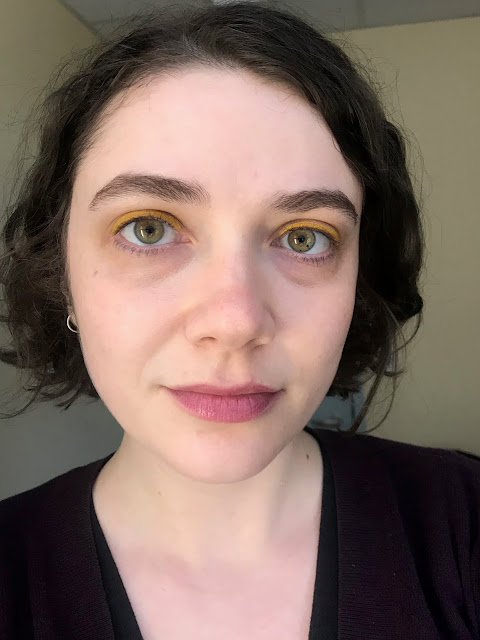 When I got home, I added Early Girl to my upper lashline and Critical Mass to my lower lashline. Glossier did a great job of designing shades that complement and set off each other. I love it when a brand helps me use color in a way I hadn't considered before. Mustard yellow, eggshell blue, and magenta—who knew? (I didn't love the magenta on the lower lashline, though; it made my eyes look irritated in real life. Also, I wish I'd extended the line farther toward the inner corner. Regrets.) 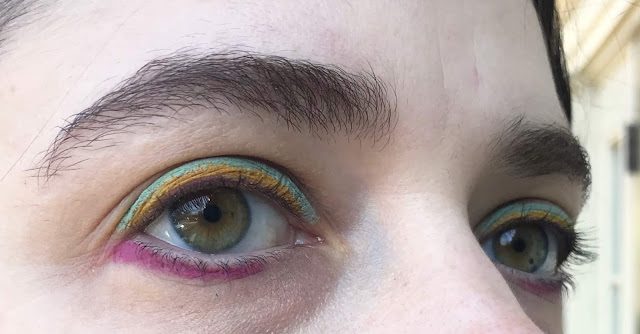 I should add that I wore Nectar for a total of 14 hours yesterday, from 8 am to 10 pm, and it barely budged. It looked a little dry and crusty at the end of the day (as you can see above), and I was able to flake it off by rubbing it, but none of the color came off on its own. Impressive!

This will probably be my last Glossier review for a while, since I've bought all the Glossier Play items I really wanted to try. My opinion on the Colorslide liners remains largely unchanged since my last post: the matte shades are great for bold, graphic looks, but not for smudging or for waterline use. Let me know if you've had a different experience!
Posted by auxiliary beauty at 12:46 PM