I recently became obsessed with a very specific lipstick shade: the deep peachy brown often seen in mid-'70s fashion editorials. One of my favorite accounts on Instagram is that of bisexual icon Sandy Linter, a makeup artist best known for her 1979 book Disco Beauty and her editorial work with Gia Carangi in the late '70s and early '80s. The disco era is my favorite period of makeup, but since I started following Linter's account, I've become equally interested in the more muted (but still very bold) looks of the mid-'70s. Linter often posts photos of her early work, such as the makeup in this photo by Arthur Elgort: 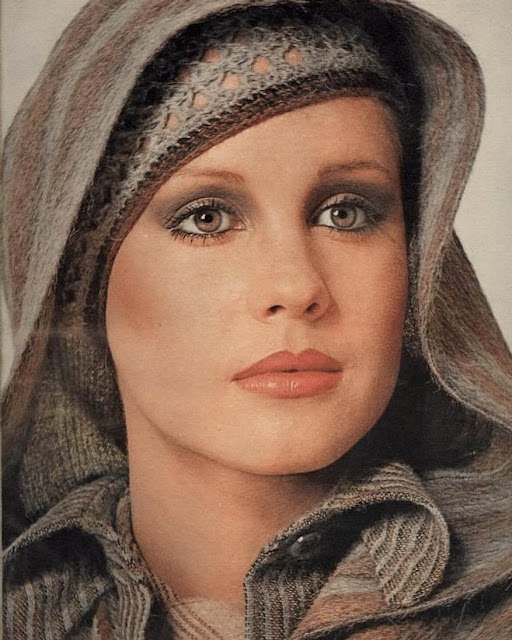 It's such a coherent Look: the blown-out bob, the skinny eyebrows, the smoky gray or brown eyeshadow blended into a cat-eye shape, the orange blush applied at the very back of the cheekbones, and the slightly glossy dirty-peach lip set off with a warm brown lipliner. The combination of gray eyeshadow and warm brown lip is unheard of today, but it's so arresting. The outfits in these photos suggest that this was less a nighttime look than a businesswoman or lady-who-lunches look (perhaps even a Mommi look), though I doubt many women did themselves up like this to come into the office or host a luncheon. Whatever!

Maybe it's the Baader-Meinhof effect, but I feel like I've been seeing more peachy-brown lipstick in k-pop videos as well, like these two looks from the behind-the-scenes video for Blackpink's new MV: 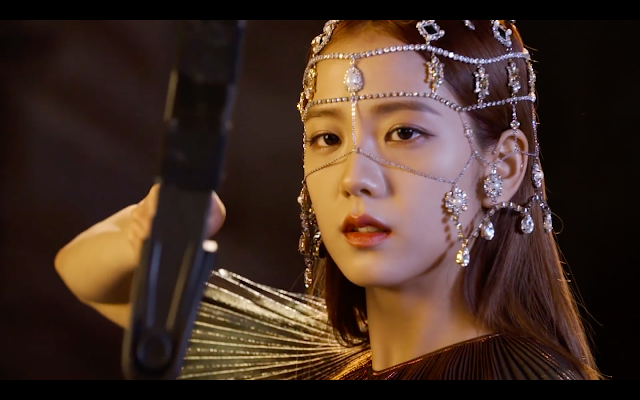 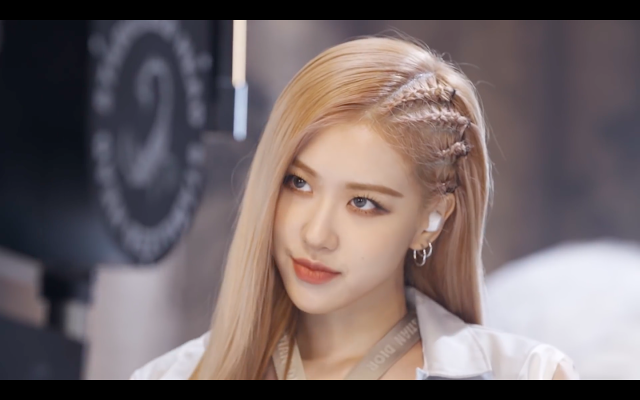 However, finding the perfect mid-'70s lipstick presented a challenge. Both Linter's models and the Blackpink members have warm-toned skin (or at least have been photographed/filmed in warm-toned lighting), and I very much do not. In fact, I'd looked casually for a brownish peach or coral in the past, but but had failed: both Wet n Wild Liquid Catsuit in Nudist Peach and Maybelline Inti-Matte Nude in Naked Coral turned almost neon on my lips, while browner-leaning shades made me look ill. This time, though, I was determined to get it right.

First, I turned to Urban Decay and its overwhelming array of Vice lipsticks. There were no fewer than five that seemed to fit my basic requirements: Carnal, Uptight, Backseat, Fuel 2, and Hitch Hike, plus a couple more whose names I can't recall. On my face, though, all of these shades fell short. I took a poll on Instagram to see whether people preferred Carnal or Uptight on me; the score was about 60/40 Carnal/Uptight, but one person told me that she didn't think either one was particularly flattering. I appreciated her honest feedback, which encouraged me to keep looking instead of settling for something that fell short of my ideal.


I didn't want to blind-order a shade from an online-only company, because I couldn't predict how it would look on my actual face, but I did swatch what felt like every remotely peachy shade from every cruelty-free brand in Sephora and Ulta. Several of these swatches looked promising on my hand but turned into something completely different on my lips: 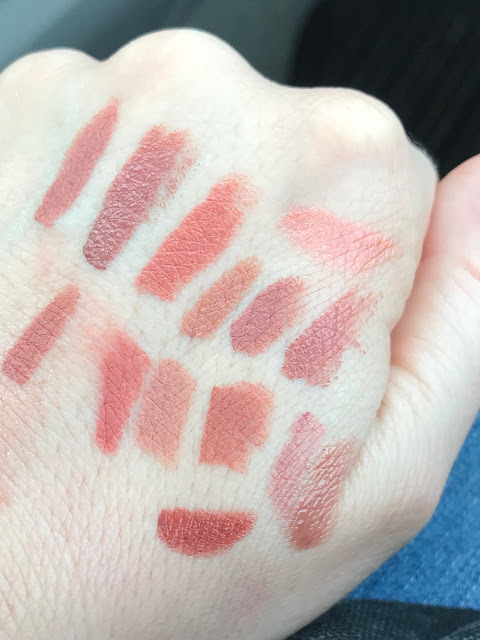 I almost gave up and concluded that this entire color family wasn't for me, but I decided to try the local MAC store before throwing in the towel. As I've probably mentioned before, I have mixed feelings about giving my money to MAC. They make some of my all-time favorite lipsticks, but because they sell in China (which requires animal testing on imported cosmetics), they're not cruelty-free. However, I'd rather support MAC than other non-cruelty-free brands because of the Viva Glam Fund, which is celebrating its 25th anniversary this year. All proceeds from the six Viva Glam lipsticks go toward HIV/AIDS research, a cause very close to my heart. I don't actively follow MAC's new releases or turn to them first when I'm looking for a new lipstick shade, but I don't feel terrible about buying a MAC lipstick once in a while.

I went to the MAC store with a list of well-known shades I wanted to swatch (including Mocha, Taupe, and Persistence), but I was immediately drawn to a lipstick I'd never heard of: Smoked Almond, in the Amplified Creme formula. It turned out that this lipstick was part of the new Strip Down collection, which had launched just a few days before. Strip Down purports to offer a "nude for every mood" with an assortment of new and re-released lipsticks, glosses, and liners. It seems that Smoked Almond was one of the most popular shades in the discontinued Liptensity line, though the original Smoked Almond looks to have been a bit pinker and cooler-toned than the new version. (For the record, I swatched Smoked Almond next to Mocha and they looked almost identical in color, though Smoked Almond was more glossy.)

The moment I tried on Smoked Almond, I knew this was the end of my quest. And just as well, tbh, since I have more important things to think about, such as what the hell I'm going to do with the rest of my life.


Continuing in its grand tradition of providing inaccurate shade descriptions, MAC characterizes Smoked Almond as a "bright rose brown." It might look like that on some skin tones, but in the tube, Smoked Almond is undeniably a soft brownish peachy coral. 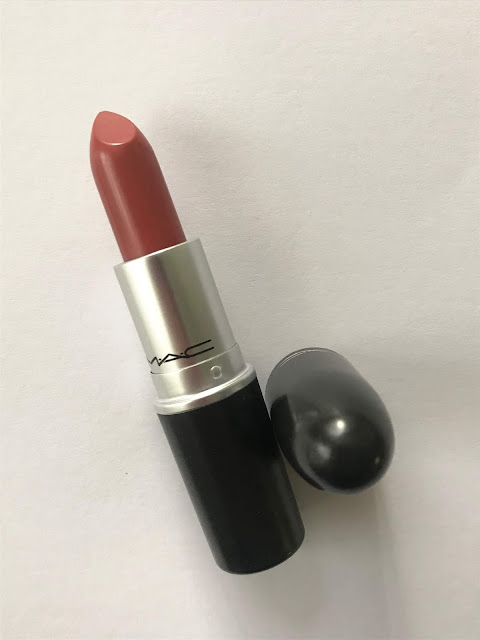 In direct sunlight, it does (obviously) look brighter, but it retains a dusty, muted terracotta quality. It's the brightest new shade in the Strip Down collection, though: all the other shades are variations on beige, blush, and brown. 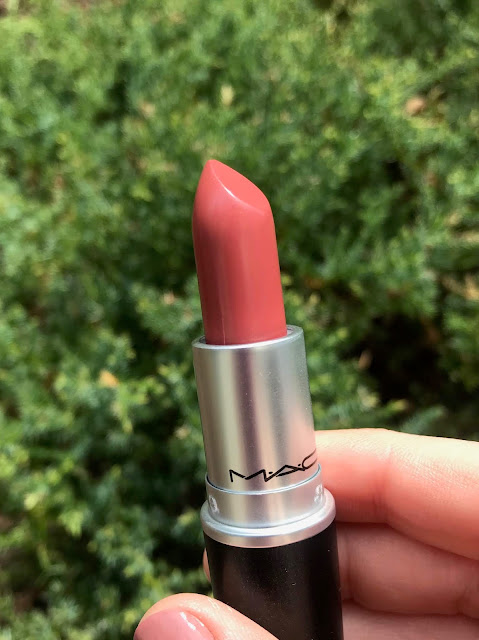 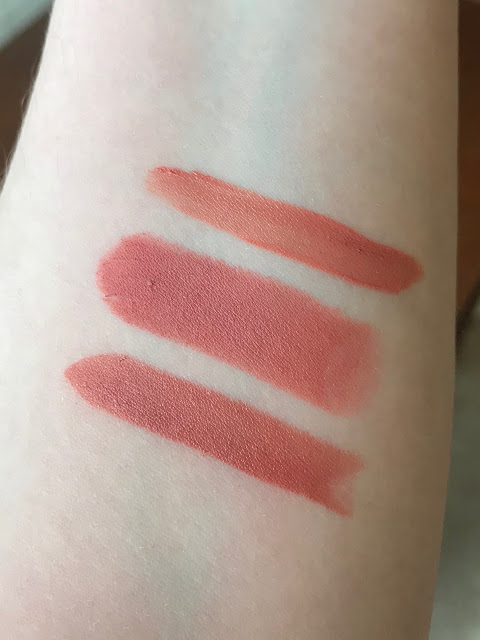 Both Naked Coral and Nudist Peach are quite a bit brighter than Smoked Almond, and both have an evident white base. Smoked Almond is the darkest and brownest of the three, as well as the glossiest and most moisturizing. The three shades may look similar in these arm swatches, but I promise they look very different on my lips! I like using Nudist Peach as a sheer matte lip stain, but I think I might end up destashing Naked Coral, despite having worn it often two years ago. Tastes change, alas.

And here's a lip swatch of Smoked Almond, with my usual caveat that my lips are perpetually dry:

I'm very impressed with this iteration of MAC's Amplified Creme formula. In the past (with the shades Up the Amp and Dubonnet), I've found the formula to be a little too thick and heavy-feeling for my taste. Smoked Almond feels lighter on my lips, but is still moisturizing and opaque. It lasts a few hours if I don't eat or drink. 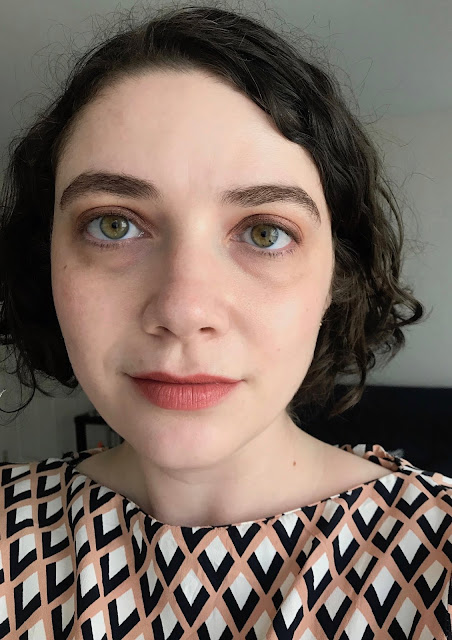 Smoked Almond is muted enough to look surprisingly natural against my cool-toned skin (it's not an MLBB, but it's closer than I expected!), but bold enough that it doesn't wash me out when paired with understated makeup elsewhere. As proof of which, here's a subtler look; I'm wearing ColourPop Glass Bull (a sheer red/blue duochrome) on my lids, though you can't really tell because it's been so damn overcast here. 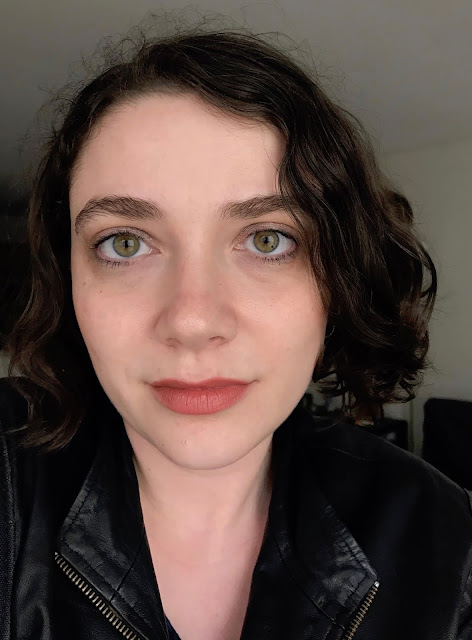 And, of course, I had to attempt one of the mid-'70s Sandy Linter looks. I chose the third one, and I don't think I did a bad job! The hardest part, both technically and emotionally, was overlining my lips, which I never do. I was surprised at how nicely the cool-toned eyeshadow harmonized with the warm-toned lip, since I (and most people these days, I think) assume that cool and warm neutrals look awkward together. When I posted this photo on Instagram, Lena noted that both the gray and the brownish peach evoke pottery shards, which makes a lot of sense: there's a vaguely classical vibe to the look, at least color-wise. 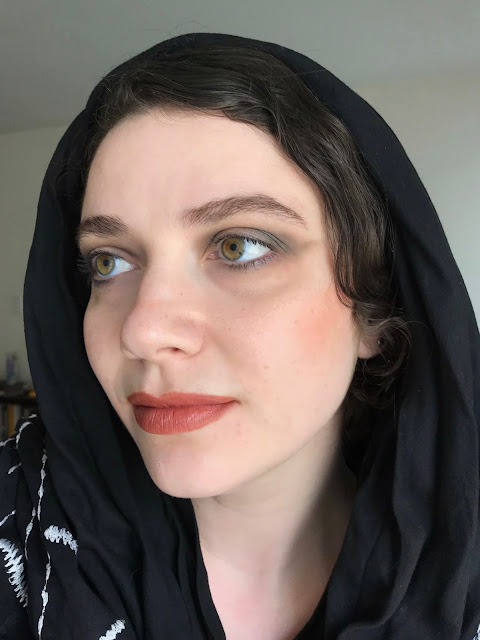 For the eyes, I combined NYX Gunmetal eyeliner and several matte shades from ABH Modern Renaissance and UD Naked2 Basics. My blush is Glossier Dawn. On my lips, I used ColourPop Lippie Pencil in Taurus, a deep warm brown, and a couple coats of Smoked Almond, with a dab of Revlon Rosy Future gloss on top. No highlighter for this look, since I wanted to keep the matte effect of the original (though the model is wearing matte foundation and, I imagine, lots of powder). 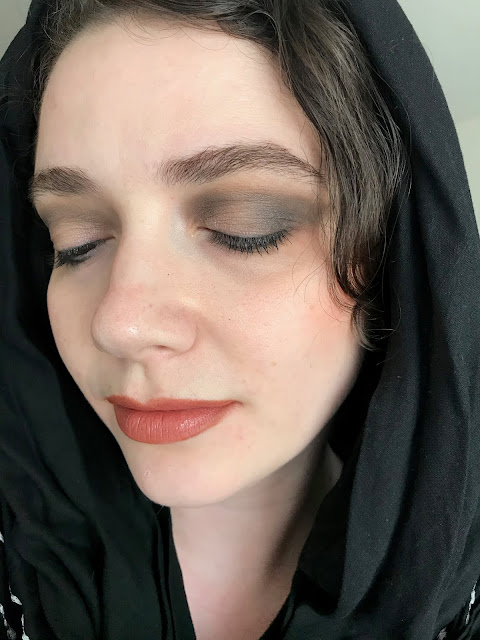 Here are the three lip products I used (L-R): Rosy Future, Smoked Almond, and Taurus. I would never have picked out Taurus on my own, but it was a surprise freebie in a ColourPop order last year, and I've come to like it for toning down bright oranges and corals. 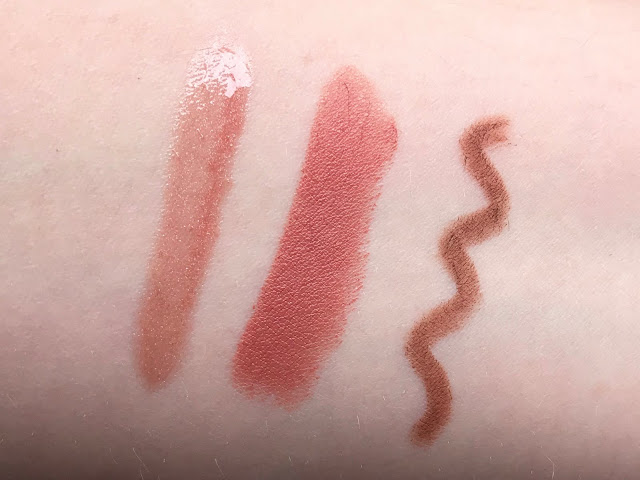 It had been a long time before I'd taken the better part of an hour to play with makeup and create something out of my comfort zone. I need to do that more: it was fun and calming, and it helped distract me from the sorry state of American academia. I doubt I'll ever wear that exact look out of the house, but it did inspire me to experiment further with combining warm and cool neutrals.

By the way, you should totally follow Sandy Linter on Instagram: she's a super cool lady who will actually show up and discuss her makeup techniques if you tag her in a post.

Ah, a lipstick quest concluded successfully. Is there a better feeling? Well, maybe finding a job that provides a living wage, health benefits, and a decent amount of intellectual stimulation, but the lipstick will do for now. (Wish me luck with the other thing, though.)
Posted by auxiliary beauty at 11:16 AM