Is This Weird? This Seems Weird.

So, I'm in a bit of a situation with Glossier. Allow me to explain.

As you might remember, when I first swatched my Glossier Play Colorslide in Nectar, the entire tip broke off. Annoyed, I posted an Instagram story and tagged Glossier Play's account. This was on March 30: 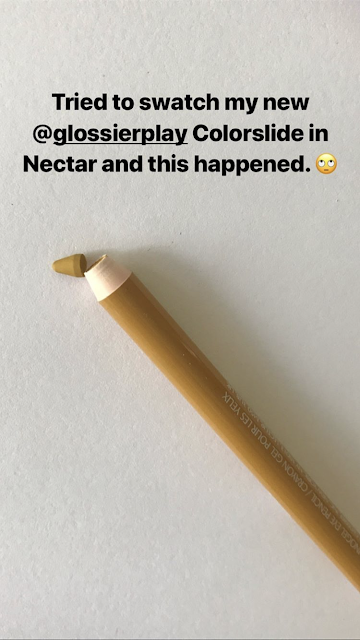 Exactly a month later, I got a message from Glossier Play's IG account, and we had the following exchange: 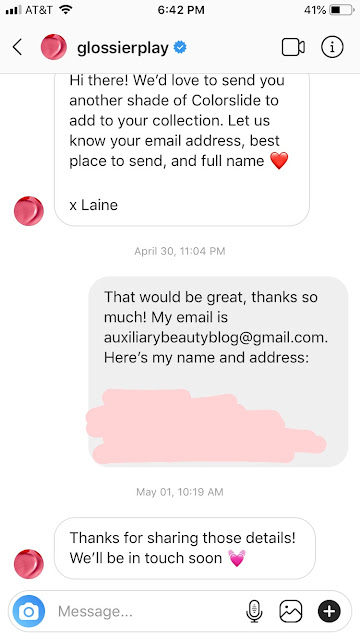 Since Glossier is known to replace broken products free of charge, I assumed I was being sent a replacement Nectar. That seemed very generous, considering the pencil had sharpened just fine after the initial break, but I wasn't going to say no to an extra eyeliner: it would make a nice gift, or I could have a giveaway on Instagram. I thought it was a little odd that I was being contacted an entire month after posting my story, but whatever—Glossier must be busy with the new launch.

I didn't hear from Glossier again after that final IG message, and I more or less forgot about the whole thing. Then, two days ago, I received this email at the address I'd provided (sorry about the awkward screenshots; I've also transcribed the message below): 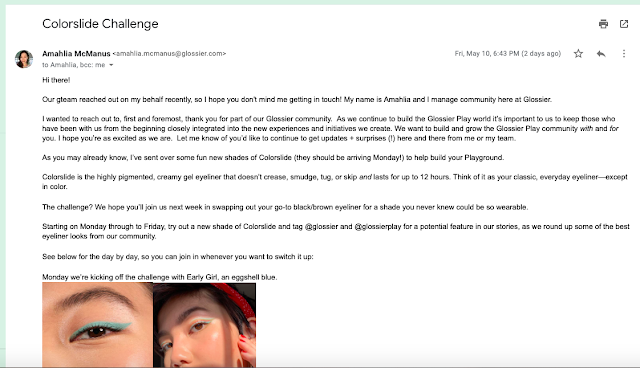 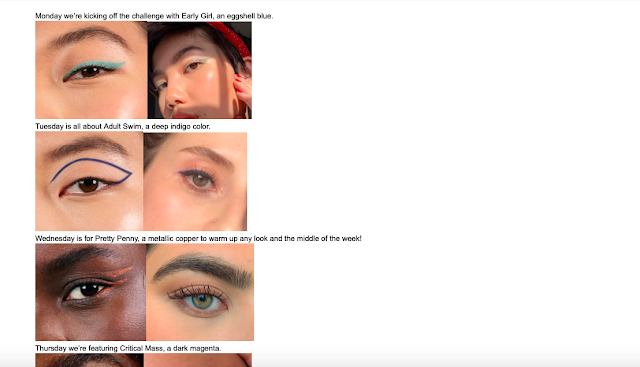 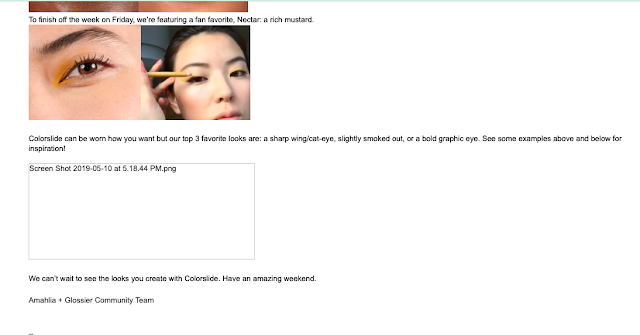 Our gteam reached out on my behalf recently, so I hope you don't mind me getting in touch! My name is Amahlia and I manage community here at Glossier.

I wanted to reach out to, first and foremost, thank you for part of our Glossier community. As we continue to build the Glossier Play world it’s important to us to keep those who have been with us from the beginning closely integrated into the new experiences and initiatives we create. We want to build and grow the Glossier Play community with and for you. I hope you’re as excited as we are. Let me know if you’d like to continue to get updates + surprises (!) here and there from me or my team.

As you may already know, I’ve sent over some fun new shades of Colorslide (they should be arriving Monday!) to help build your Playground.

Colorslide is the highly pigmented, creamy gel eyeliner that doesn’t crease, smudge, tug, or skip and lasts for up to 12 hours. Think of it as your classic, everyday eyeliner—except in color.

The challenge? We hope you’ll join us next week in swapping out your go-to black/brown eyeliner for a shade you never knew could be so wearable.

Starting on Monday through to Friday, try out a new shade of Colorslide and tag @glossier and @glossierplay for a potential feature in our stories, as we round up some of the best eyeliner looks from our community.

See below for the day by day, so you can join in whenever you want to switch it up:

Monday we're kicking off the challenge with Early Girl, an eggshell blue. Tuesday is all about Adult Swim, a deep indigo color. Wednesday is for Pretty Penny, a metallic copper to warm up any look and the middle of the week! Thursday we're featuring Critical Mass, a deep magenta. To finish off the week on Friday, we're featuring a fan favorite, Nectar: a rich mustard.

Colorslide can be worn how you want but our top 3 favorite looks are: a sharp wing/cat-eye, slightly smoked out, or a bold graphic eye. See some examples above and below for inspiration!

We can’t wait to see the looks you create with Colorslide. Have an amazing weekend.

Yesterday evening, I got home to find a package containing two Colorslides in Adult Swim and Pretty Penny, plus the Glossier pencil sharpener. Clearly, someone at Glossier had checked out my order history and sent me only the products I didn't already have. 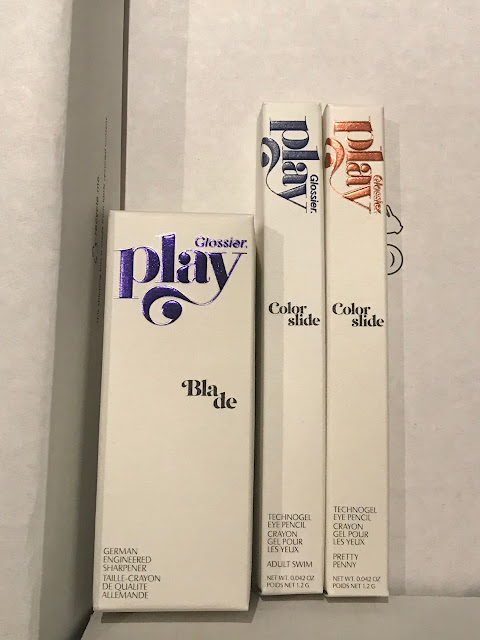 On one hand, I feel ridiculous objecting to any part of this situation: receiving surprise free makeup is a pretty sweet deal! On the other hand, I'm a bit weirded out by the whole thing.

First, the misleading IG messages: I was told only that I was receiving "another shade of Colorslide," with nothing expected from me in return. As I write this, I realize that the phrase "another shade" should have clued me in to the fact that I wasn't being sent another Nectar. But because I'd previously posted about Nectar being broken, I assumed that the Glossier representative was responding specifically to that post. And "another shade" is singular, not plural!

What I really object to, though, is the rhetorical situation constructed by the email. (Can you tell I just taught two semesters of freshman composition?) Glossier is clearly assuming that the free products will create a sense of obligation in their recipients: "Hey, we sent you these expensive products out of the blue; the least you can do in return is provide us with advertising content on Instagram." It feels slimy and dishonest. These products cost Glossier cents to make, and now I'm supposed to feel so grateful for Glossier's generosity that I'll agree to turn my Instagram account into a Glossier Play commercial for a week? Yeah, no. If they want me to do the job of their marketing team, they can pay me in real American currency, not in eyeliner.

It would have been a different story if the first IG message from Glossier Play had articulated the actual situation: "Would you like to try some new Colorslide shades with the expectation that you'll participate in a five-day 'Colorslide Challenge' on social media?" I would have declined, and we'd all have moved on with our lives. Instead, Glossier sent me the products and then tried to rope me into the challenge. Instead of framing it as a quid pro quo, they hoped I'd feel emotionally obligated to do them a favor in return for a gift. Women are socialized to feel obligation and do favors, and Glossier is absolutely capitalizing on that.

Of course, this is all part of Glossier's strategy of trying to make customers feel like friends or like members of an exclusive clique. If that strategy didn't work, Glossier wouldn't be as successful as it is today. The email I received on Friday uses the word "community" five times, because the point of the "Colorslide Challenge" is to strengthen its participants' sense that they belong both to the general community of Glossier users and to an even more exclusive community: the group of people selected to receive the email. But cui bono—who benefits in the end? Glossier, of course.

I don't know. Am I overreacting? Does this seem weird to anyone else? I freely admit that I'm a cynical, neurotic, glass-half-empty bitch, and I'm sure most people would just take the damned eyeliners without feeling compelled to write a whole blog post about them. Blame the Gen X teachers who made me read Adbusters magazine in sixth grade, I guess.
Posted by auxiliary beauty at 7:54 PM