Now that I'm winding down my blog, I've entered a reminiscing frame of mind. I've been thinking about my favorite aspects of the beauty community, one of which is our appreciation for the nuances of color. I've always had a good eye for color, but following makeup and beauty for so many years has taught me that there's truly no such thing as a boring or ugly color. Take beige, for instance. The word is used casually as a synonym for "dull," but a judicious application of just the right shade of beige can completely change a makeup look. As proof of which, I present two beige products that I've been using constantly since they arrived at my door: ColourPop Super Shock Cheek in Aphrodisiac and Super Shock Shadow in Truth. 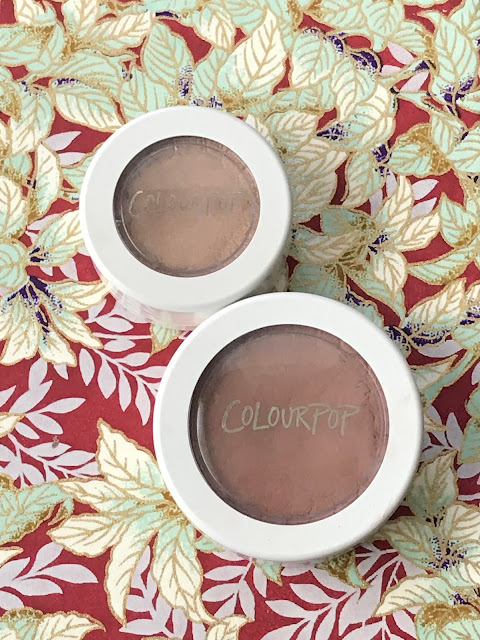 Both of these products are as permanent as ColourPop products get: they've been around for a few years and, since they seem to be quite popular among customers, they probably won't be discontinued anytime soon. I ordered Truth after asking my Instagram followers for recommendations for a my-eyelids-but-better shade in the Super Shock formula. I'd been considering a few of ColourPop's more famous shadows, such as Wattles and Hanky Panky, but I was afraid they'd be too peachy or reddish for me. I'm so grateful to the person who suggested Truth, because I'd never heard of it or noticed it on the website, and it's perfect for my needs: a sheer light beige with a hint of shimmer but no glitter. As for Aphrodisiac, I ordered it hoping it would work as a subtle bronzer, which it does!

Aphrodisiac is a pinkish brown that seems to look different on every single person. (It came out in 2015, when there were significantly more beauty blogs than there are now, so it's easy to find reviews.) On warmer complexions than mine, Aphrodisiac can look almost mauve; on my fair, cool-toned skin, it's a soft warm brown. When I first saw Aphrodisiac in the pan, I worried that it would be too dark, but it's quite sheer. In general, I find the Super Shock blushes (I've also tried Rain) to be drier and less pigmented than the Super Shock Shadows. (This is not a criticism: I'd rather build up my blush color gradually than blend out a surprise clown cheek.) 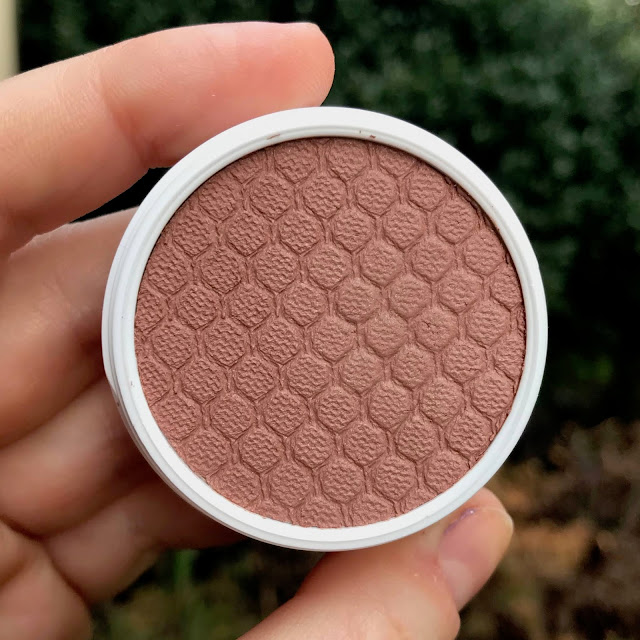 Truth also misled me (ironically enough) when I first saw it in the box: it looked like a yellowish peach, not like the "neutral light beige" promised on the website. 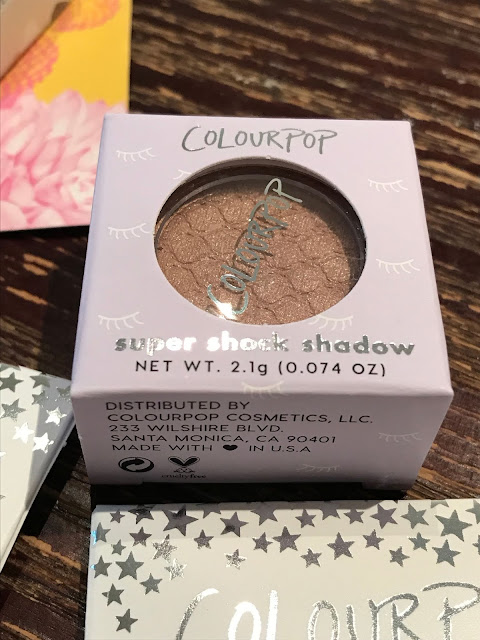 But as they said in the Renaissance, veritas filia temporis: Truth is the daughter of Time. After I unboxed Truth and looked at it in natural light, it seemed closer to my ideal. (Writing about unboxing Truth with a capital T makes me feel like I'm crafting a Spenserian allegory or something.) 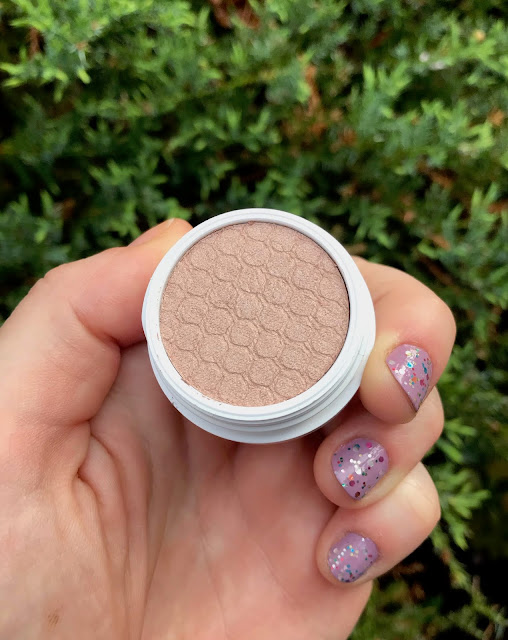 Truth is probably the smoothest, silkiest Super Shock Shadow I've ever tried, and I've owned quite a few in my time. Swiping my finger across its surface is a genuine pleasure: it feels almost as soft as clotted cream. Unsurprisingly, it spreads across my eyelid just as easily as clotted cream would if I tried to use it as an eyeshadow, which...let's just move on.

Swatches of Aphrodisiac (left) and Truth, in shade (top) and in sun: 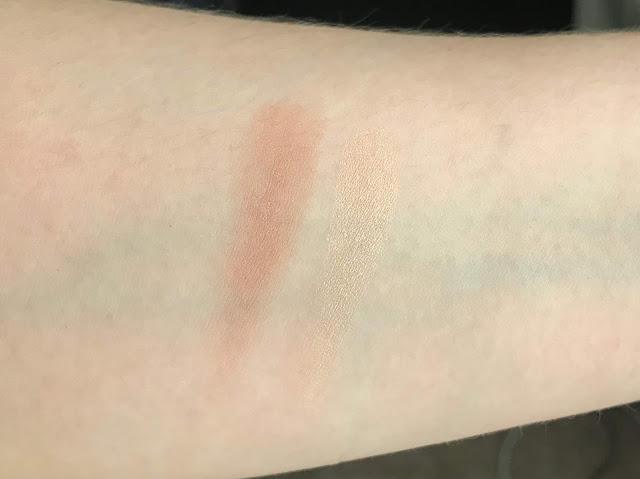 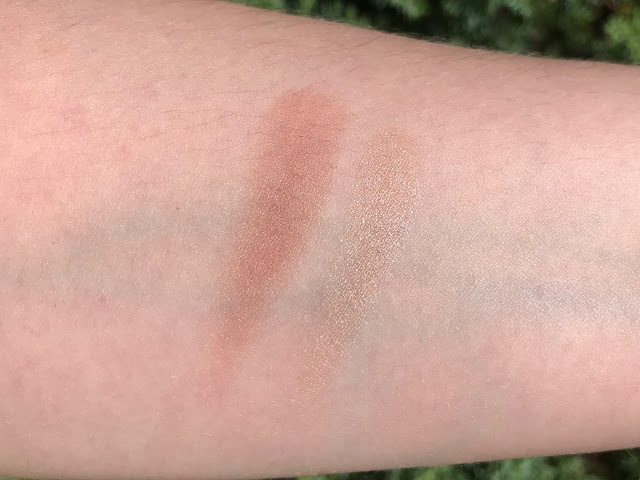 And for a better sense of texture, here are the two pans in direct sunlight now that I've been using them for a couple of months. If you enlarge the photo, you can see some tiny flecks of shimmer in Aphrodisiac, but it reads as completely matte on my perpetually dry cheeks. 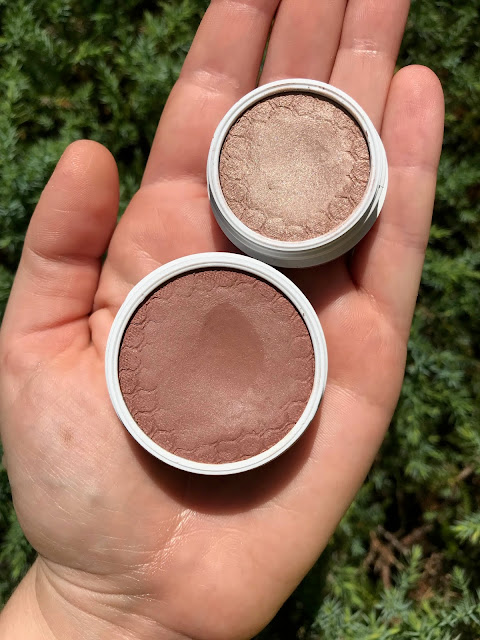 As a complete tyro in the world of bronzer, I'm not sure of the best placement for it. Should I use it on the tops of my cheekbones, where the sun would naturally bronze my skin, or should I blend it under my cheekbones for a contoured look? I've seen it used both ways and read passionate arguments in favor of one way or the other. In general, I like to wear darker blushes in an '80s-inspired placement under my cheekbones and lighter, brighter blushes on the apples of my cheeks, closer to the center of my face. Since Aphrodisiac certainly qualifies as a darker blush, I've been wearing it as I would a contour (not that I've used contour more than a couple times in my entire life), but I'm certainly willing to hear arguments for the other side!

I was also curious to try Aphrodisiac as an eyeshadow, which I'd seen a few people doing. I'm always wary of using not-intended-for-eyes products on my eye area, but I can report that my lids didn't experience any discomfort or staining at all. Here I am wearing Aphrodisiac on both eyes and cheeks, along with Becca liquid highlighter in Opal (my Sephora sample tube from 2017 is still going strong) and Urban Decay lipstick in Lawbreaker (just started my second tube!): 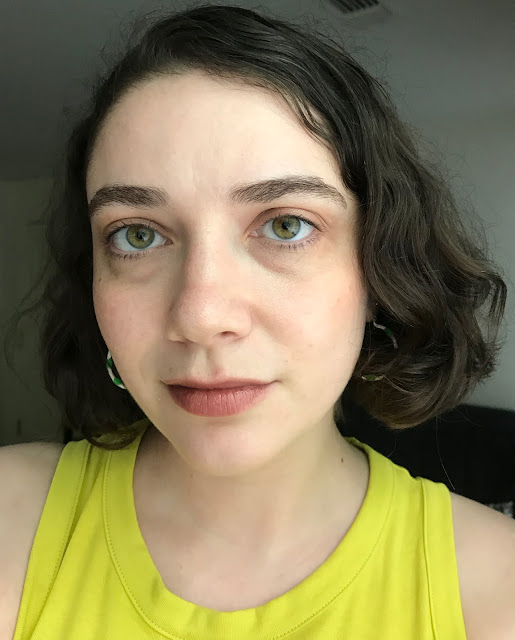 Closeup of the eye: 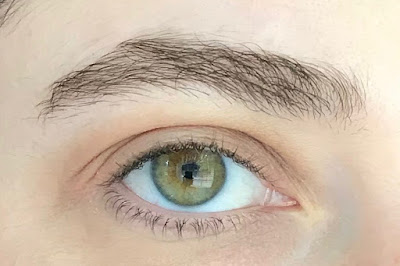 A more recent bronzey look: Aphrodisiac and ColourPop Lunch Money highlighter on my cheeks, Maybelline Bad to the Bronze on my eyes, and Bite Rose Pearl gloss on my lips. This photo makes me realize just how cool-toned my hair is: it looks almost gray against the warm browns on my face. 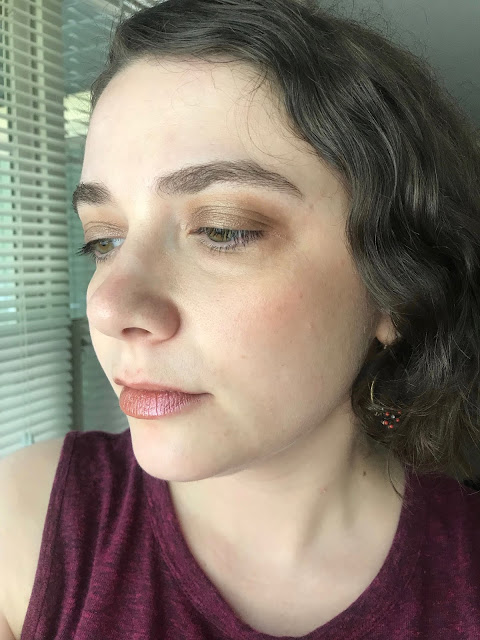 As for Truth, I've been wearing it either on its own or with brown eyeliner on my upper lashline. I've heard that some people use it as a base for other shadows, but I'm not sure how well that would work. Here's a closeup of Truth with Urban Decay Whiskey eyeliner: 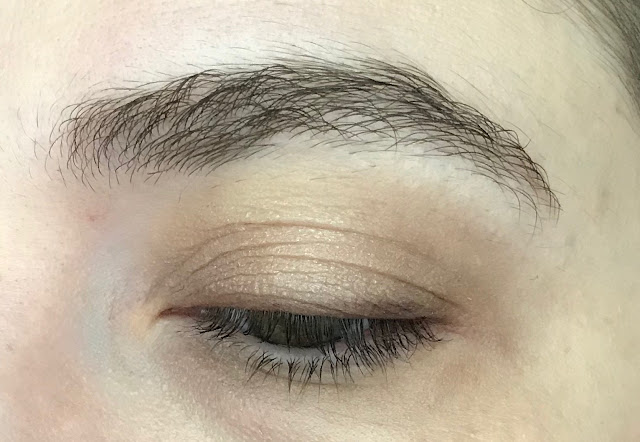 And here's the full face, with ColourPop Lux Lipstick in Dream Easy. It's finally coral season! 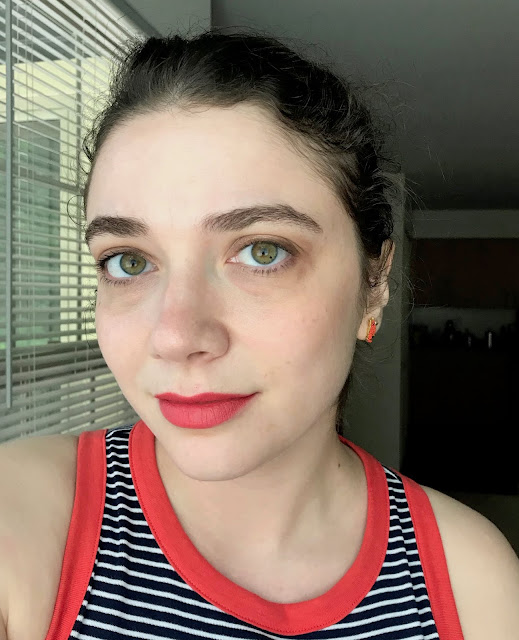 My third ColourPop haul post will review the pressed powder shadows in Bassline and Howlin'. Come to think of it, I might just make that post into a megapost with swatches of all my CP powder shadows, since I haven't reviewed most of the shades I own. We shall see!
Posted by auxiliary beauty at 2:00 PM