I've always had an affinity for the color yellow. Maybe it's because my birthstone is topaz, or because yellow is one of the least popular colors and I love a polarizing underdog, or because mustard and chartreuse are surprisingly flattering to my cool-toned complexion, or because lemon bars are my favorite dessert and, fittingly, the official dessert of bisexuals. Whatever the cause, I've been drawn to yellow since childhood. I have a vivid memory of my dad, a classical guitarist, taking me to a music store on Haight Street when I was seven or eight and letting me pick out a slide flute. The color choices were red, blue, and yellow, and I went for yellow without a second thought. As an adult, I find it hard to resist yellow accessories, clothes, and makeup, and I always gravitate toward splashes of yellow in museums, as I did in the St. Louis Art Museum last month:


So when ColourPop started releasing monochromatic nine-pan eyeshadow palettes for $12 each, I waited on tenterhooks for the yellow one, which finally materialized at the end of June.

When the first photos came out, I was disappointed. I'd been hoping for a palette that explored the warm, cool, light, and dark manifestations of yellow, but but the Uh-Huh Honey palette was overwhelmingly warm-toned, and most of the shades were neither light nor dark. ColourPop might as well have called it the Colonel Mustard palette. Where was the acid yellow? The pastel yellow? The chartreuse? There were other issues, too: ColourPop had made the environmentally irresponsible decision to switch its packaging from cardboard to plastic, and the corneally irresponsible decision to include a non-eye-safe body glitter in an eyeshadow palette. But as the weeks went on, I found myself more and more tempted by Uh-Huh Honey, especially as I had only a couple of eyeshadows that could be described as yellow. We all know what happened next: 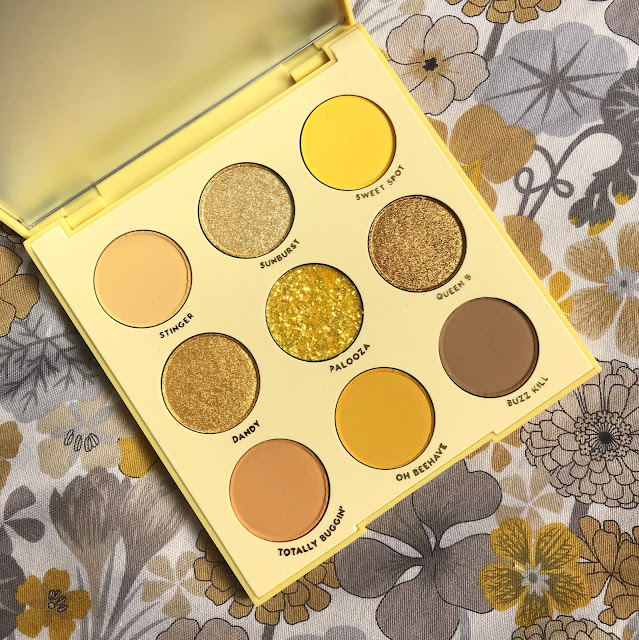 I've now been using Uh-Huh Honey for over a month, so I feel comfortable delivering an overall verdict: it's good! It hasn't blown me away, but I'd give it a solid B (bee?) and wholeheartedly recommend it to anyone whose eyeshadow stash is lacking in yellows, as mine was.

The packaging is nice: a solid plastic compact that closes securely with a click. Unfortunately, and predictably, the gold lettering on the lid does wear off. I've toted the palette to three different states now, and this is the result: 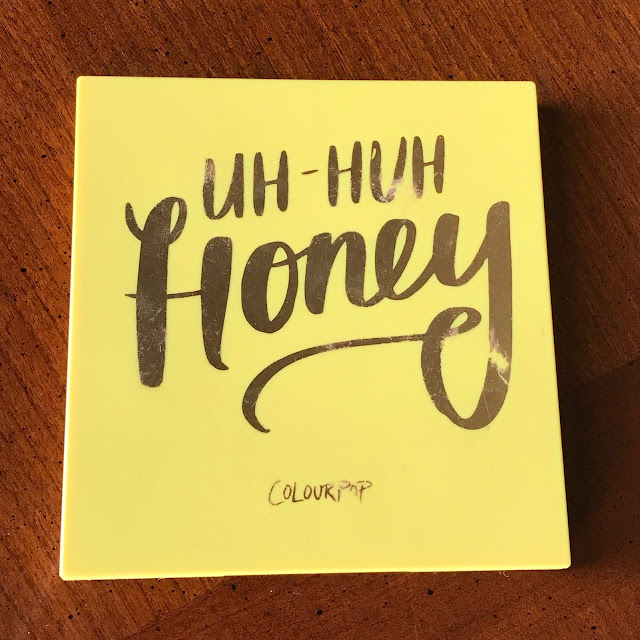 The compact has a very nice mirror that I didn't realize was a mirror until ten minutes ago, because it was covered by a peel-off plastic sheet and this is apparently the first eyeshadow palette I've ever bought? 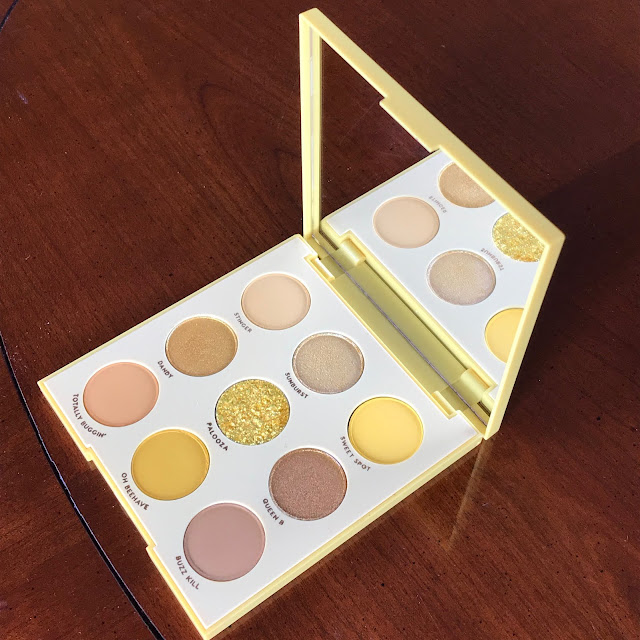 When I first swatched the shadows, I was disappointed in the pigmentation of the mattes. Now that I've used all of them a few times, they're depositing more pigment on my brush, so I think I just had to get the top layer off. Still, they're a little less pigmented than the ColourPop matte singles I've tried (almost all of which have been very impressive). The three shimmers (Sunburst, Dandy, and Queen B) are unquestionably the stars of the show. Here are some finger swatches I made yesterday; I didn't bother swatching Palooza, the glitter, because I'm not going to risk my eyesight by putting it on my lids.

Some quick descriptions of the shades:

Stinger is a matte, light, slightly orangey yellow that reminds me of Gouda cheese.
Sunburst is a metallic, slightly sheer light yellow with blue duochrome.
Sweet Spot is a bright, matte true yellow.
Dandy (my favorite!) is a metallic true yellow.
Palooza is a chunky yellow glitter with shifts of orange and blue-green.
Queen B is a metallic, slightly yellow-toned bronze reminiscent of whiskey.
Totally Buggin' is a matte light butterscotch.
Oh Beehave is a matte mustard yellow; it looks much browner than Sweet Spot but isn't terribly different when swatched.
Buzz Kill is a matte medium brown that's slightly darker and cooler-toned than Totally Buggin', but fairly similar in action. 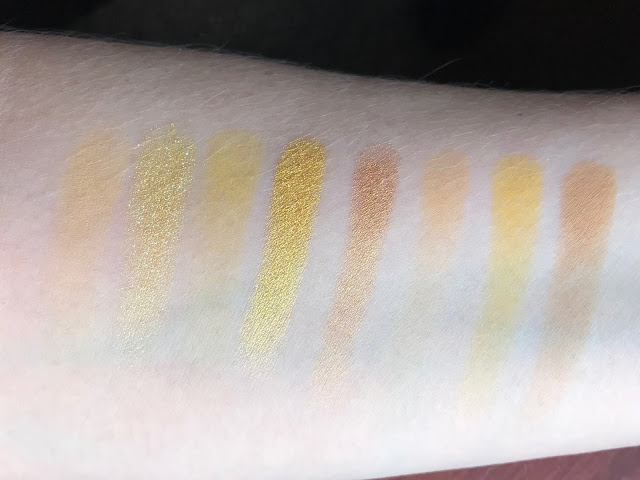 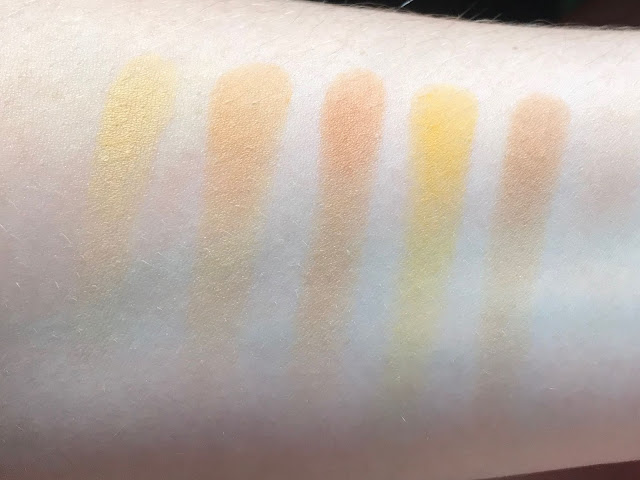 The obvious weakness of this shade lineup is the lack of variety and contrast. I thought Buzz Kill would be effective for darkening my outer corner, but it's not much darker than Totally Buggin'. And I wish Stinger were a lighter yellow (more of a clotted-cream shade). I've put together a few looks using only this palette, but there's no use pretending they don't all look somewhat similar. However, all the shades show up nicely on my lids (over primer, of course) and blend out smoothly, so I can't complain too much.

I think I'll end up using Uh-Huh Honey mainly in conjunction with other palettes and with singles, but here are the looks I've created with Uh-Huh Honey alone. You'll notice that none of them feature color on the lower lashline; this is because any remotely yellow-toned shadow placed under my eyes makes them look infected. Trust me. Also, excuse the variety of selfie backgrounds and the general half-assedness of these photos. It's hard to take consistently good makeup selfies when you're in a different place every two weeks. (I'm now settled in my new place in Ohio, though!)

Dandy on the lid, Stinger on the browbone, Buzz Kill in the crease and outer corner, Sunburst in the inner corner:


Queen B on the lid, Totally Buggin' in the crease and outer corner, and Urban Decay Whiskey eye pencil smudged out with Totally Buggin' on the upper lashline. I've worn Queen B the most of all the shades in Uh-Huh Honey.


Sunburst on the lid, Oh Beehave (and maybe also Sweet Spot) in the crease and outer corner. I wasn't a huge fan of this look while I was wearing it, but now I appreciate that it actually has some color contrast!


Finally, Sweet Spot in the crease and Dandy on the lid, with Palooza on my cheekbones. I used Glossier Haloscope in Quartz as a short-term glitter adhesive, but I'd welcome suggestions for a longer-term one. Unfortunately, Palooza is chunky enough that when the light doesn't hit it just right, it looks like bits of dirt. ColourPop definitely took the lazy route by incorporating a pre-existing pressed glitter instead of formulating an eye-safe glitter topper with the same color scheme, which would have been a beautiful addition to the palette. (Note, too, that almost everyone who reviews the Palooza single mentions using it on their eyelids. ColourPop's warning that Palooza is "not intended for use in the immediate eye area" is hidden in the list of ingredients.)

I think Uh-Huh Honey is well worth $12, and I wouldn't be disappointed if I'd paid $18 or $20 for it. Honestly, I would have paid $12 for the three shimmers alone. The only shade I don't think I'll use semi-regularly is Palooza, though it is a beautiful glitter and might come in handy for Pride or Halloween or something. I look forward to creating more yellow-toned looks as we get into fall! Come to think of it, I've already bought my first case of pumpkin beer (Southern Tier Pumking, objectively the best), so let's just say we're there already.
Posted by auxiliary beauty at 3:53 PM