The Great Blush Inventory of 2021

When I first got into makeup, in the early 2010s, blush was an afterthought in the Western beauty community. Everyone had a couple of blushes, generally a warm pink and a cool pink, but beauty bloggers often fretted about the prospect of looking tacky or clownish or old-ladyish (never mind the ageism and internalized misogyny involved in those fears). Blush seemed to be regarded as a necessary evil: it helped warm up the complexion and tie a look together, but a few granules too many and you'd be in embarrassing Pierrot territory. Only the bloggers who focused on retro aesthetics (Marianne of Esme and the Laneway comes to mind) embraced blush wholeheartedly, which reinforced the stereotype that blush was unmodern. Ever impressionable, I absorbed the general anxiety about the prospect of "clown cheeks." For a couple of years, I owned just two blushes, NARS Mata Hari and a peach-pink Covergirl Cheekers, and applied them very gingerly.

My aversion to bold blush started to fade in late 2013, when NARS released the controversial Guy Bourdin collection, which contained the most beautiful blush I'd ever seen: Coeur Battant, a vibrant magenta. I was conflicted: I didn't think I'd wear Coeur Battant often, if at all, but I needed that shade of magenta in my life. I bought it, of course, and its mere presence on my makeup shelf began to open my mind to other blush possibilities. So did the now-defunct beauty blog Drivel about Frivol, which often spotlighted creative Korean and Japanese blush techniques. And then I got into k-pop and began noticing new-to-me blush placements in almost every music video I watched. The screenshot below is from Red Velvet's "Dumb Dumb" (2015), which was one of the first MVs that popped into my head when I thought of k-pop makeup from the mid-'10s. As you can see, Koreans were wearing "sunburn blush" well before Western teenagers on TikTok were! 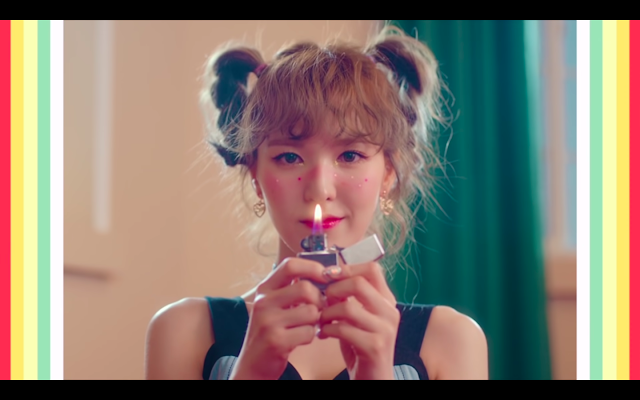 A few years after that, I became obsessed with disco beauty, the aesthetic from which NARS had drawn inspiration for the Guy Bourdin collection. Makeup artists who defined the look of the late '70s and early '80s, such as Sandy Linter and Way Bandy, used blush in vivid shades of fuchsia, peach, and scarlet to sculpt the face and craft a sharp-cheekboned, androgynous allure.

Recreating disco or k-pop looks on my own face, however, presented a problem. Bold blushes were almost nonexistent at drugstore price points (as I complained in a blog post in 2014), which limited my ability to experiment. At various moments in the mid-to-late 2010s, blush seemed to be on the verge of making a serious comeback in the West, but the hype always died down. There was some buzz around the Marc Jacobs two-toned Air Blushes in 2016, and around the Glossier Cloud Paints the next year, but blush-focused looks remained rare. Devotees of the heavy Instaglam look certainly went hard with their blush, but they also went hard with every other category of makeup. Blush was still an afterthought, existing mainly to divide the obligatory stripe of bronzer under the cheekbone from the obligatory stripe of metallic highlighter above it. No one seemed inclined to experiment with placements or unconventional colors; boring peaches and warm pinks dominated. Dark days.

In other words, we millennials had several chances to bring back blush, and we failed. It fell to the youths of Gen Z to accomplish what my generation could not. In the past year or two, blush has experienced the renaissance for which I waited nearly a decade, and I couldn't be more delighted about it. So delighted, in fact, that I've bought four new blushes since the start of 2021. Blush has, at least momentarily, supplanted lipstick as my favorite category of makeup. I can hardly believe I just typed that sentence.

I recently had the idea to take an inventory of my blush collection. "How many could I really have?" I thought. "Fifteen, maybe?" Not even close. As it turns out, I own twenty-two (22) blushes in powder, cream, and liquid formulas. Granted, I amassed this hoard over nine years, but even so. Twenty-two blushes. That's a ridiculously large number. So I decided to compile this post as a tribute to all the beautiful blushes I've collected over the past decade—and as a reminder to myself that I absolutely, positively do not need a single blush more.

Below, I've photographed every one of my blushes as it looks right now, linking to my own reviews where available and putting asterisks next to my favorite shades. 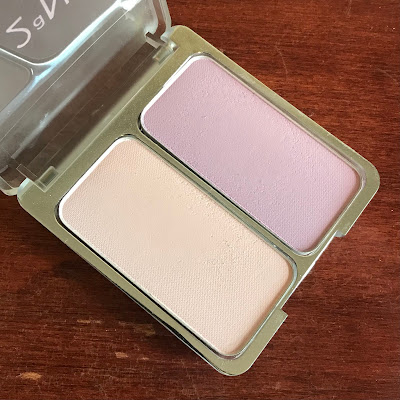 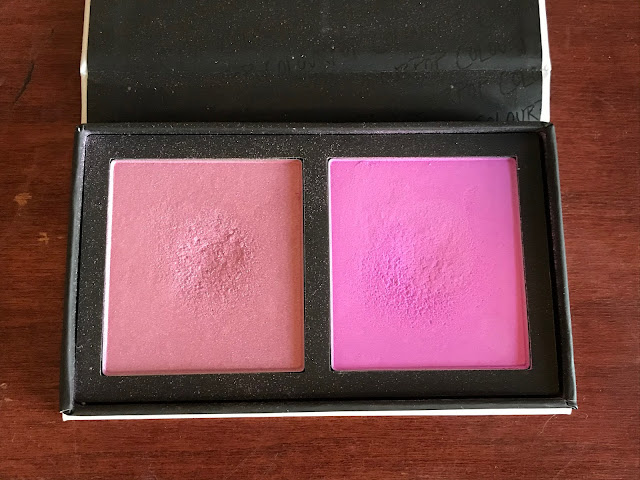 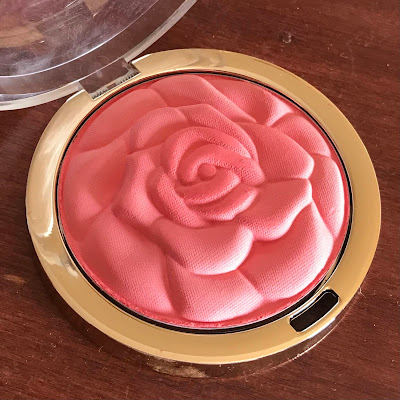 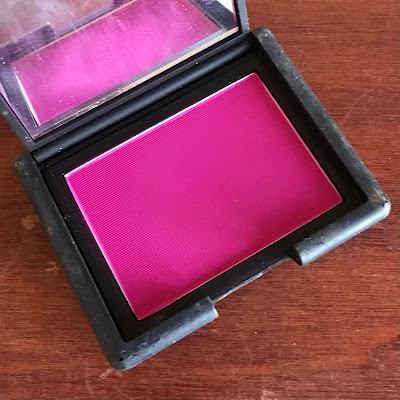 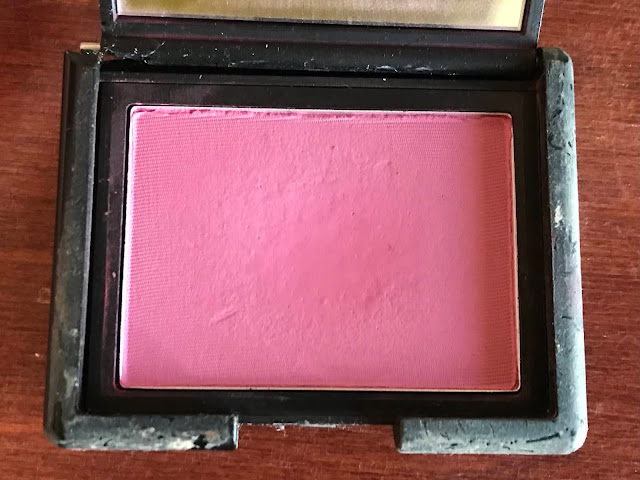 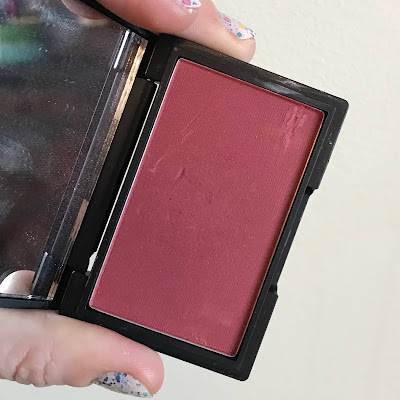 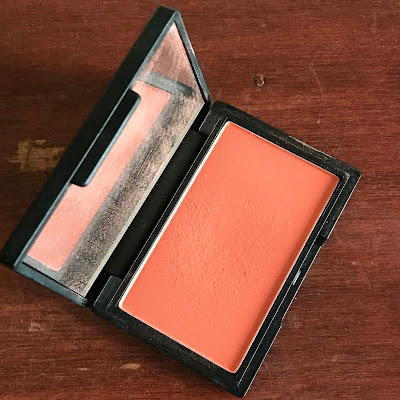 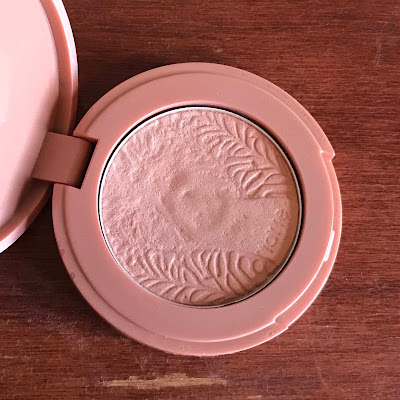 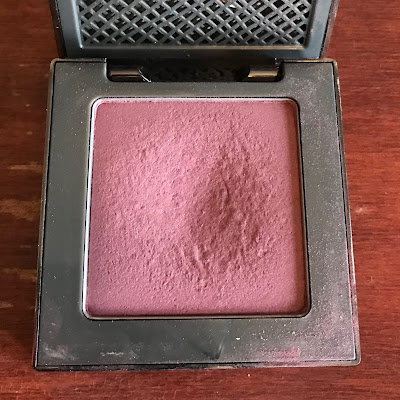 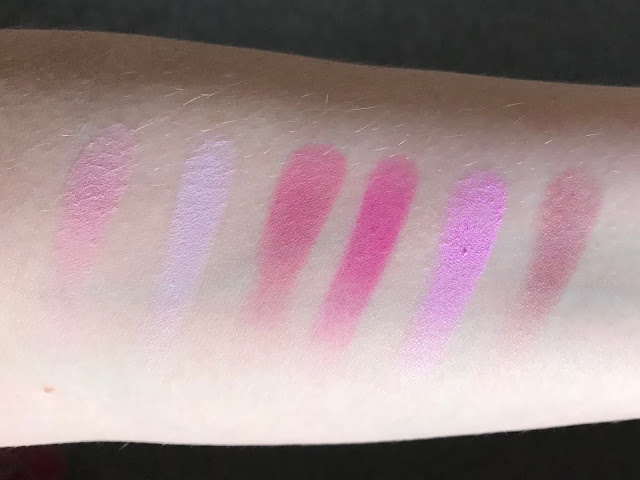 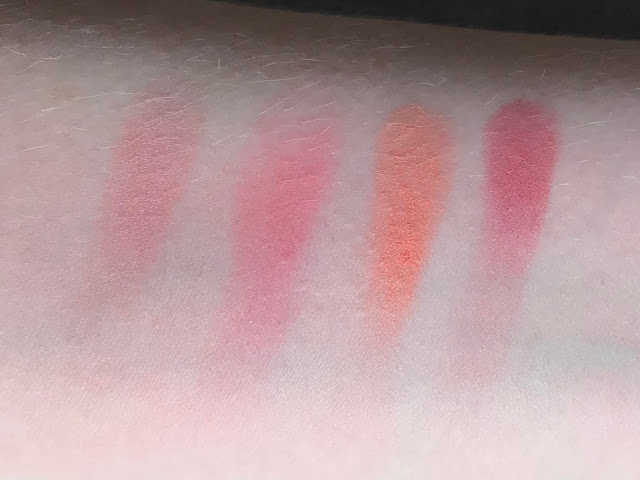 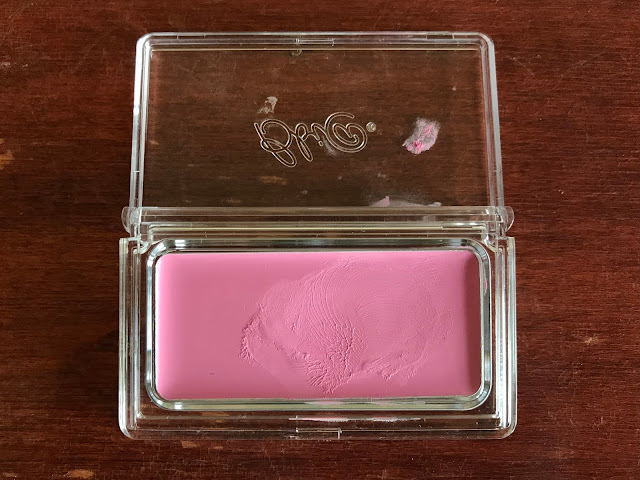 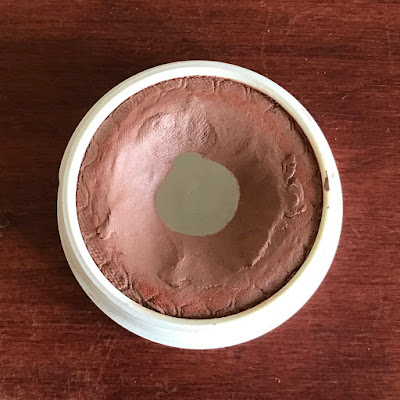 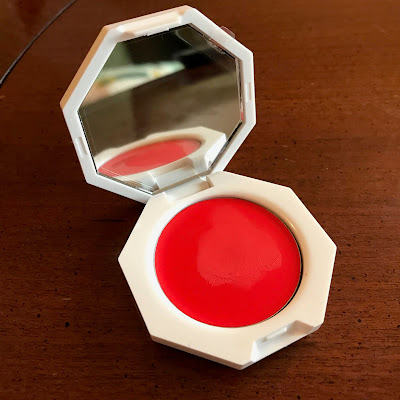 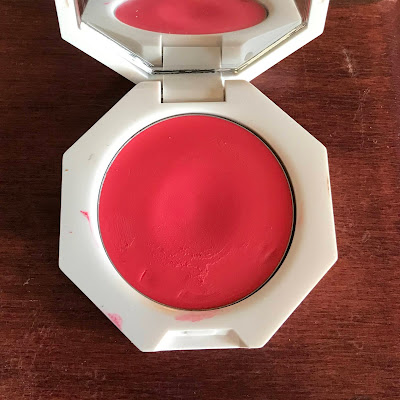 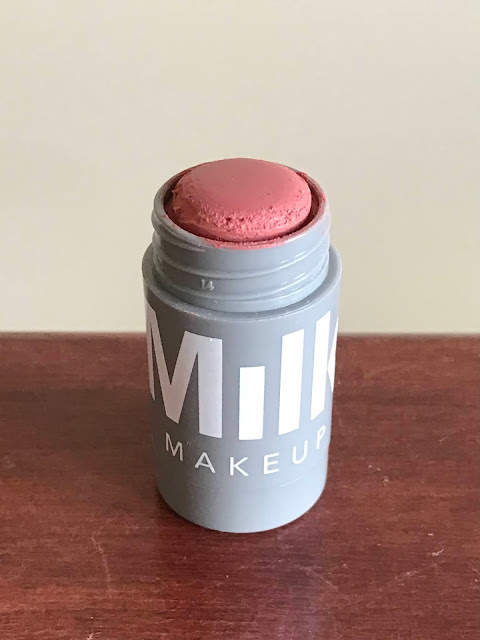 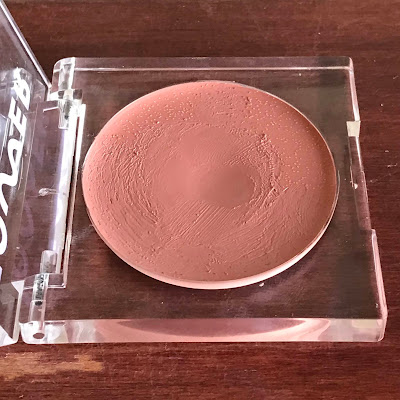 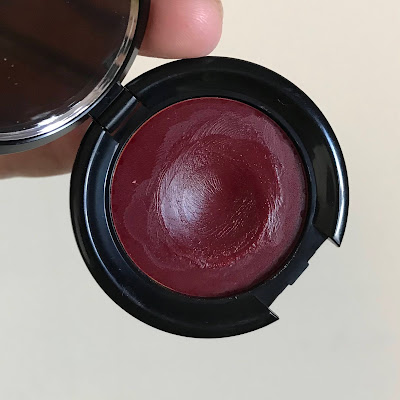 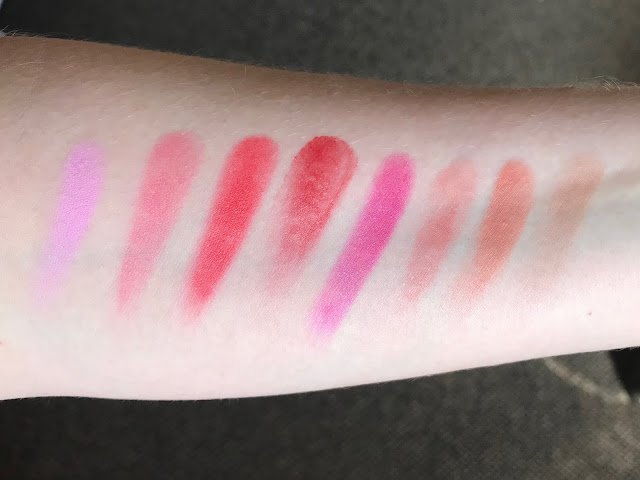 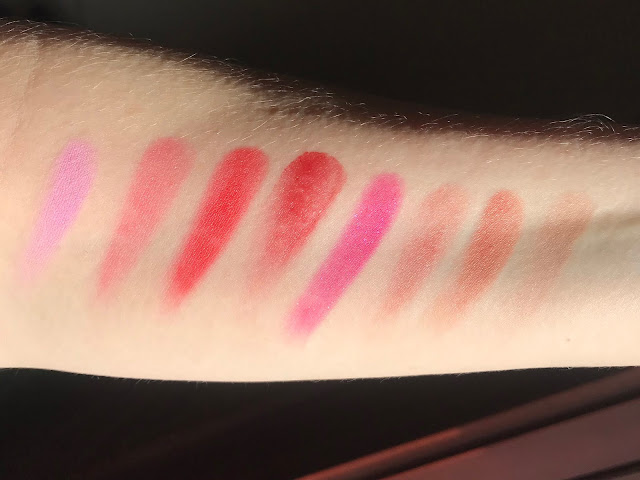 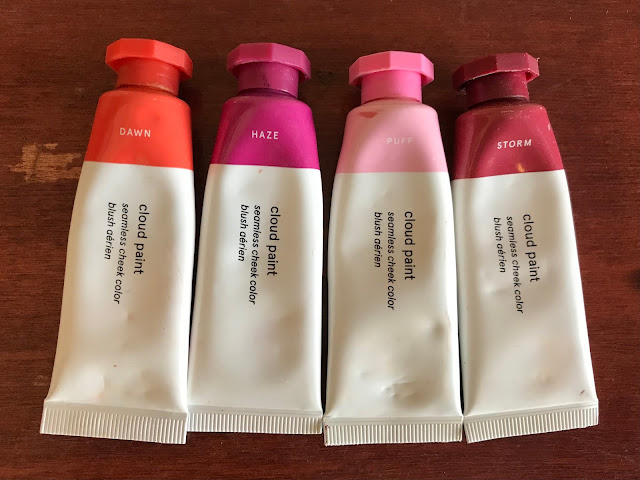 Swatches (one swipe each):

And now for some recent blush-centric looks! As usual, the blush looked much bolder in person than it does in these photos.
I call this one "1979 meets 2009." Points of interest: old Kiko eyeshadow, NARS Coeur Battant blush, and Revlon Glass Shine lipstick in Beaming Strawberry. 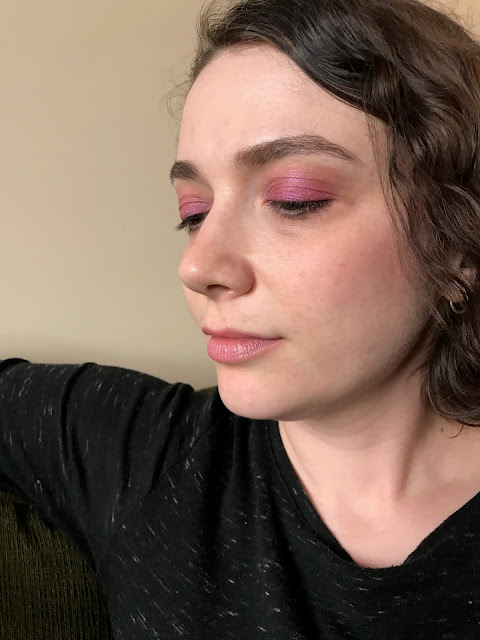 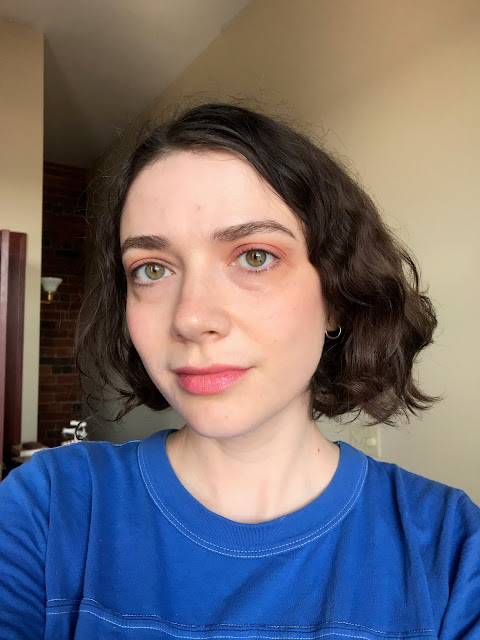 And some pre-shower experimentation with sunburn blush, using Fenty Daiquiri Dip, which I'll probably review in due course: 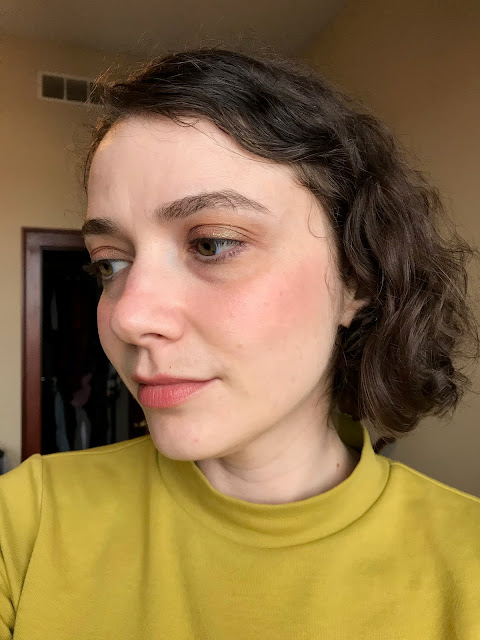 My blush-related goals for the rest of 2021: buy no new blushes, hit pan on at least three shades, and experiment with using two or more shades in a single look. Wish me luck!

Posted by auxiliary beauty at 4:19 PM

Email ThisBlogThis!Share to TwitterShare to FacebookShare to Pinterest
Labels: blush, state of the stash